Op-ed: Azerbaijan is waging a war not just against Armenia, but the entire civilized world 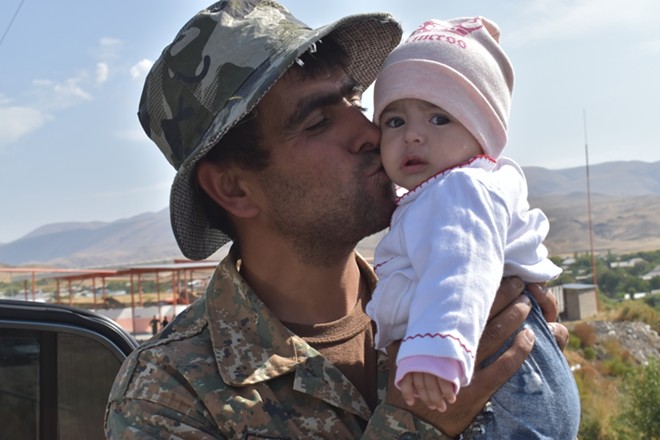 photo via Armenian Ministry of Defense Press Service
In 1915, the state of Florida’s various publications provided journalistic due diligence in reporting news that drew attention to humanitarian assistance and inhumane atrocities. Florida was an integral supporter of Near East Relief (NER), the American-led campaign that quickly sparked an international response with its unprecedented humanitarian endeavor, mobilizing all segments of American citizenry including elected officials, celebrities and laypersons alike, to help rescue victims of the Armenian Genocide in Ottoman Turkey from 1915-1930. Through several publications and pleas for assistance to the American nation, the state of Florida requested prayer days for the dying as it rallied to raise critical funds to sustain NER’s invaluable efforts to rescue and rehabilitate millions of refugees and orphans.

As a descendant of Armenian ancestors, more than 100 years after the Armenian Genocide, this is my plea for history not to repeat itself.


As a descendant of Armenian ancestors, more than 100 years after the Armenian Genocide, I am finding myself in an unimaginable reality that was merely described to me by my parents and grandparents. I am waking up to images of children hiding in bunkers with terror in their eyes, messages from family in my homeland describing sounds of missiles landing and feeling inundated by the mission of ethnic cleansing as the end goal of Azerbaijan’s and Turkey’s aggression. This is my plea for history not to repeat itself.

Armenians are being targeted and attacked once again. We are reliving 1915.

The Azerbaijani offensive is an attempt by Ilham Aliyev to stabilize his government by diverting attention away from domestic problems heightened by the economic decline caused by COVID-19 and a drop in oil prices. Despite international pressure for a cessation of hostilities, Azerbaijani forces have also launched direct attacks on the internationally recognized borders of the Republic of Armenia, targeting military and civilian infrastructure. Azerbaijani armed forces are targeting civilians with large-caliber weapons, mercilessly killing women and children. By deliberately targeting civilians and civilian objects, by using indiscriminate and prohibited methods and means of warfare, Azerbaijan has violated the rules of International Humanitarian Law.

Azerbaijan’s infamous advocate and genocidal big brother, Turkey is actively involved in the escalation of this conflict. Turkey, under the leadership of Recep Tayyip Erdogon is leading a proxy war to satisfy its imperial pan-Turkik aspiration and drive to dominate yet another region. Azerbaijan and Turkey are threatening regional stability and peace. The outbreak of a full-scale war in the South Caucasus could have serious consequences, involving Russia, Georgia, and Iran, thus spilling beyond the borders of the region and threatening international security. This is not only a war waged against Armenia and Artsakh, but a war against the entire civilized world. Totalitarian Azerbaijan is a threat to democracy everywhere. Azerbaijan and Turkey are assaulting the freedom, liberty, democracy, and the right to self-determination of the Armenian people.

The situation in Armenia is critical and needs your attention. We, the Armenian diaspora, are asking for your help again as we did in 1915, to provide coverage of these atrocities and shine light at what could be the next genocide. Despite a week of intense fighting, and the use of banned weapons, there has been little to no media coverage.

I urge you to contact your Senators and Congressmen to call attention to this growing trend of fascism from regimes responsible for war crimes and human rights violations. You can visit anca.org/alert if you'd like to learn more about these war crimes.

Arpine Dokuzyan is a member of the Armenian National Committee of America – Western Region.