One Orlando Alliance retracts job offer to Alabama lawmaker who tried to 'out' Gov. Kay Ivey Photo by Monivette Cordeiro
The One Orlando Alliance is retracting a job offer it made to Alabama State Rep. Patricia Todd after the state's first openly gay lawmaker insinuated Alabama Gov. Kay Ivey was also gay and deserved to be "outed."

The LGBTQ alliance created in the aftermath of the Pulse mass shooting announced in May that Todd had been selected as organization's first executive director. 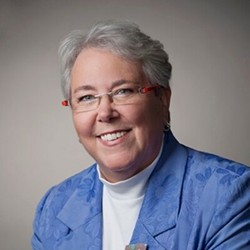 Patricia Todd
Todd was set to start on June 1, but on Tuesday, the Birmingham Democrat made several controversial social media posts about Ivey. Earlier that day, the Republican governor said she "didn't agree with the agenda or the values" of an LGBTQ nonprofit getting federal funds, according to the news organization AL.com.

In response, Todd tweeted, "Will someone out her for God's sake....I have heard for years that she is gay and moved her girlfriend out of her house when she became Gov. I am sick of closeted elected officials."

In a statement to AL.com, the Alabama governor called Todd's claim a "disgusting lie being pushed by a paid left wing liberal political operative." Ivey also told a local TV station she was a "born-again Christian" and believed marriage was between a man and a woman.

"This most recent personal attack against me is beyond disgraceful," Ivey said. "There is absolutely no truth to it. It's false. It's wrong. It's a bald-faced lie. And I'm not gonna let them get away with it. Whether these attacks are malicious or ignorant or both – they represent everything that's wrong with politics today."

"Outing" LGBTQ people is a form of emotional violence, said Christopher Cuevas, executive director of the local group QLatinx and a member of the One Orlando Alliance.

"Weaponizing queerness through the act of outing others is a violation of the sacred rite that we as queer people undergo in our journey of self-discovery," Cuevas said in a statement. "It is a form of psychic and emotional violence; a violence that robs one of their ability to self-actualize and manifest their truth; a violence that hinders the fostering of fellowship and community; a violence that calls into question our ability to see the value in trusting others with our authentic self. When our humanity is violated in this way, how can we find space to begin healing in self and to promote the healing and growth of others?"

One Orlando Alliance officials offered Todd the job of executive director after an extensive search that started last year. After careful deliberation, the alliance's board of directors unanimously agreed Thursday to pull the offer.

"The Board affirms that Ms. Todd’s recent comments are not aligned with the values of One Orlando Alliance," said Jennifer Foster, chair of One Orlando's board of directors. "We strongly believe that coming out is a personal choice and we do not support involuntarily outing."

Foster added that the situation was "challenging." The mission of the alliance's 30 LGBTQ and ally organizations in Central Florida is to "create a safe, welcoming and inclusive community for all LGBTQ+ people."

"While Ms. Todd has a well-established record of outstanding service to the community, her lapse in judgment has led us to end our relationship with her," Foster said in a statement. "We admire her many decades of exemplary service and believe that, with the right opportunity, Ms. Todd will continue to use her many talents to make significant progress advocating for justice and equality."