On DACA anniversary, undocumented 'Dreamers' vow not to return to the shadows

Photo by Monivette Cordeiro
Since President Donald Trump won the November election, Ivan Vázquez's grandma has tried to convince him to leave to California.

Unlike most of Florida, California has multiple sanctuary cities and local governments that don't detain undocumented immigrants for federal immigration officials. Vázquez says his grandma felt it would be safer for him to live there because he is one of about 800,000 so-called Dreamers who are recipients of Deferred Action for Childhood Arrivals, a program that gives undocumented immigrants who arrived as children the chance to work legally without fear of deportation. Florida has almost 33,000 DACA recipients.

Earlier this week, Vázquez and about 75 other people traveled from outlying neighborhoods to chant outside U.S. Sen. Marco Rubio's downtown Orlando office, marking the five-year anniversary of DACA as it faces intense scrutiny from the Trump administration. Although Trump promised to immediately rescind President Barack Obama's DACA program during his campaign, he is now apparently torn over what to do with it, saying, "There are two sides of a story. It's always tough." Texas Attorney General Ken Paxton and nine other state attorneys generals recently threatened to sue the Trump administration if the president does not agree to phase out the program by ending new permits and stopping permit renewals by Sept. 5.

"It's like running away," he says. "I haven't done nothing wrong, so why should I be afraid?"

In Orlando, protesters were specifically outside Rubio's office because they accuse him of flip-flopping on his support for undocumented immigrants. Rubio, who has argued that DACA is unconstitutional, was part of the Senate's "Gang of Eight" legislative attempt at a comprehensive immigration reform plan in the Senate in 2013, and in 2012 worked on a similar Dream Act. The 2013 bill ultimately failed.

The Naples Daily News reports Rubio said in January that the majority of Americans want to help accommodate young people who "through no fault of their own find themselves in this country illegally," but the newspaper notes Florida's Republican senator did not say whether he would take the lead on legislation to protect Dreamers. 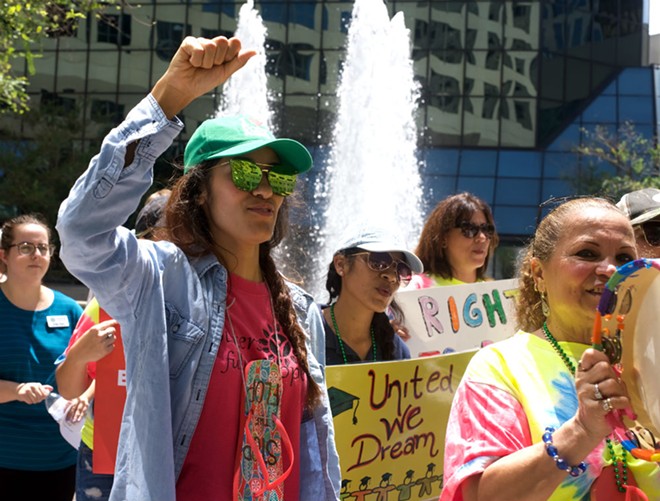 Photo by Monivette Cordeiro
Vázquez, who is an organizer with the Farmworker Association of Florida, says after DACA, he was able to get a driver's license and go back to school for nutrition. Right now, he's working on a community garden project in Apopka to bring organic food to locals.

"I feel like [Rubio] could see the value that we have for this country, that we can actually do something greater," he says. "We have talent and  we're working. We're not just sitting there collecting unemployment."

Vázquez says for too long he lived in fear and in the shadows as an undocumented immigrant, and he doesn't plan on going back or leaving his home.

"It's like running away," he says. "I haven't done nothing wrong, so why should I be afraid?"

Eli Garcia, of the Hope CommUnity Center in Apopka, was leading protesters as they chanted "Aquí estamos y no nos vamos," which translates to "We are here and we're not leaving." Garcia, who is also a Dreamer, says immigrant groups around Florida are trying to put pressure on Rubio to stay on the side of DACA recipients and the undocumented community. In Apopka, small raids and the deportation of immigrants have put many in the community back in the dark, she says.

"People are not going out anymore a lot," she says. "As Dreamers, we can still drive, so it's OK, but right now because they're trying to sue DACA, it's putting fear in many people have. But we are here today because we are not afraid. We are turning this fear into power for our community."

Just visualizing the end of DACA and the opportunity to get a degree is upsetting for Garcia.

"If this happens, it's going to affect a lot of people," she says. "I'm afraid to go back to the shadows and not be able to continue with my education. But I'm not going to let it just defeat me. I'm not going to leave it without a fight."