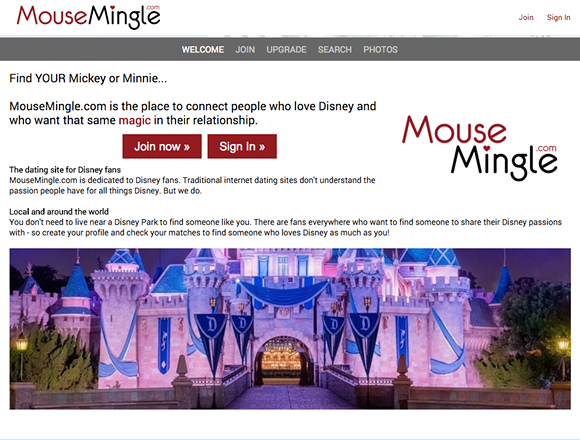 Screengrab via MouseMingle.com
The main page of MouseMingle.com
Disney fans finally have a dating site designed to help them find their own Prince Charming, Humpback of Notre Dame or whomever else they might be into.

The site, MouseMingle.com, was designed to unite people whose love of Walt Disney Co. products outweighs all else. Aside from the basic dating site questionnaire (name, gender, looking for male/female, interests), the site allows its users to search for partners based on favorite Disney character, favorite Disney song, favorite Disney movies – noticing a pattern here? – and a host of other specific Disney qualities.

In an interview with the Orlando Sentinel, site founder and former Disneyland cast member David Tavres said that he created the site because of the difficulty he experienced in meeting women who shared his love for Disney.

"Disneyland was my side thing. I didn’t find a lot of women in their late 20s early 30s that had an interest in Walt Disney and the history of the park," Tavres told the Sentinel.