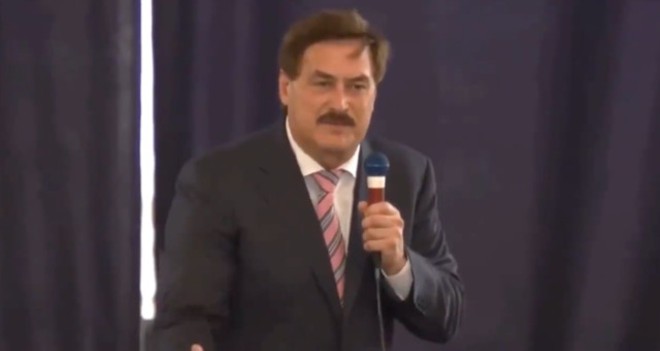 Last weekend, a slew of far-right grifters, coronavirus truthers and QAnon followers gathered for the “Reopen America Tour” at the River at Tampa Bay Church, which is conveniently run by evangelical conspiracy theorist Rodney Howard-Browne.

But arguably one of the more prominent speakers was Mike “MyPillow Guy” Lindell, who has spent the better half of a year fruitlessly trying to get anyone to listen to his incredibly dumb, unfounded claims that the 2020 election was stolen from former President Donald Trump.

According to Right Wing Watch, during his presentation, Lindell lamented that no one in the media, or the courts for that matter, will take him seriously anymore. So, to get his message out that the election was stolen from Trump, Lindell has now resorted to “cyber guys.”


At a gathering of election, COVID-19, and QAnon conspiracy theorists, Mike Lindell said he'll be hosting a "cyber symposium" in July where "cyber guys" will prove the election was stolen and then "Donald Trump will be in office by this fall, for sure." https://t.co/bcUmh1c8xv pic.twitter.com/9tNsqIUNoU

“We’re bringing in all the cyber guys,” he continued. “They’re gonna be there. Then we’re bringing all the media. Maybe even Fox will show up! What a concept. And then we’re going to bring in all senators, governors — even the corrupt ones, Brian Kemp — and legislatures, secretary of states, and every single government official that wants to be there, because when we show them these packet captures, we’re gonna just give them out to all them cyber guys so they can have their own guy go, ‘How many votes were flipped here in Tampa?’ Here you go. Boom. It’s going to be a worldwide event. Millions are going to see it, and those Supreme Court justices are going to look at it then, and they’re going to go 9-0 that this country was attacked. The election is gonna come down. Donald Trump will be in office by this fall, for sure.”

Recently Lindell confessed to Daily Beast that he lost $7 million after retrofitting 75 percent of his pillow factories to make face masks, which he now says he wants to burn out of sheer anger.