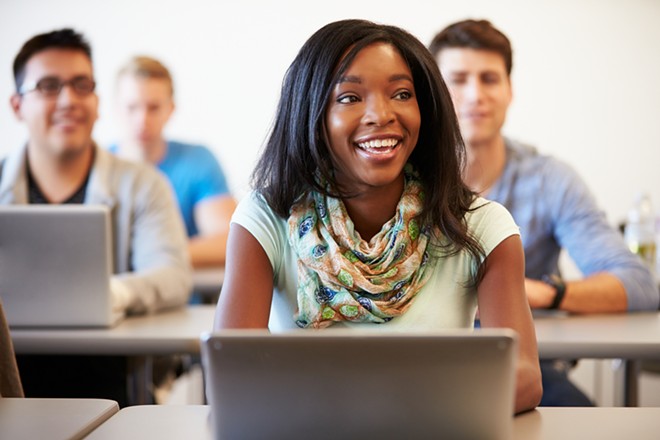 Photo via Shutterstock
More women than men opt to take only online classes to earn bachelor’s degrees in Florida’s state university system, according to a new report from the system’s Board of Governors.

“The higher percentage of females enrolled in only distance-learning courses is consistent with national data that show that females are more likely to be caregivers, which leaves them place bound. Distance-learning courses provide an opportunity for those who are place bound with family or job responsibilities to obtain an education,” said the report, which will be reviewed this week by the Board of Governors, the panel that oversees the 12 state universities.

The report highlights the experience of Lucy Golden, who used an online program at the University of West Florida to earn a bachelor of science degree in nursing, while working full-time and raising a family.

“The online format was perfect because I could work it around my schedule,” Golden told a University of West Florida publication last fall. “My twins were still teenagers, 13 or 14 and not driving, so I had to drive them around, take them to places —- to the ROTC program and games. It worked really well —- that was the beauty of it. I loved being able to do my classwork whenever I wanted. It doesn’t matter whether I was up night or day, I could get to it.”

Golden, who had previously worked as a registered nurse before earning her bachelor’s degree, is now employed as a psychiatric-mental health nurse with the U.S. Department of Veterans Affairs.

Sixty-nine percent of undergraduates in 2016-2017 took at least one online course, up from 66 percent in the prior year, according to the annual survey conducted for the Board of Governors.

The Board of Governors’ goal is to have 40 percent of credit hours in the state university system earned in online classes by 2025.

At the graduate level, 27 percent of the credit hours were online, led by 81 percent at the University of West Florida.

Those numbers reflect a variety of options for students, including solely taking online classes, taking some online as well as regular classes, taking hybrid classes, which combine online and in-classroom teaching, and taking only standard classes.

Florida is a national leader in using online university classes, with 174,183 students enrolled in online classes in fall 2016, trailing only Texas, with 220,650 students, the report showed.

Undergraduates who took between 41 percent and 60 percent of their classes online were more likely to earn their baccalaureate degrees faster than students who took no online classes, the report showed. The online students graduated in an average of 3.75 years compared to 4.08 years for non-online students.

Undergraduates taking only online classes were older, an average age of 28, compared to students taking no distance learning or a mix of online and standard classes, whose average age was 22, the report showed.

Graduate students enrolled in only online classes had an average age of 34.