Milk District residents worry about new development, but big changes may be inevitable

Off Bumby Avenue, Leah Fairchild and Matt Uva have created an oasis.

Minutes away from the high-rise condos and lively bars of downtown Orlando, the couple live in a quaint 1930s bungalow surrounded by a small forest of their own in the Milk District neighborhood. Inside the home Fairchild has rented since 2011, she writes and concocts different scent combinations for the candles she makes in a workspace near her screened porch.

Near the side of the bungalow, there's a butterfly and vegetable garden. In the dirt, the couple planted milkweed for the monarchs; lettuce, red tomatoes and radishes for themselves. Toward the left fence on the property, there is a row of Surinam cherry trees. They ripen into red bell-like fruits that Fairchild picks and stuffs in her apron pockets.

The towering trees in their backyard provide shade from the sweltering Florida sun and a home for pileated woodpeckers, squirrels, possums and raccoons. During Thanksgiving, the couple says they turn on the lights strung between the trees, set up a long table and invite about 20 of their friends to a holiday feast.

During a September visit, late-afternoon sunlight filters in through the trees, and for a moment, it's easy to forget the ants biting your ankles and bask in the glow. This bungalow, like many of the homes in the shadow of the T.G. Lee Dairy plant, is affordable for Fairchild and Uva, who work in creative fields and the service industry.

"It's not just a house," Fairchild says. "It's our home. It's a refuge for plants, trees and the local neighborhood critters. It's our little paradise." 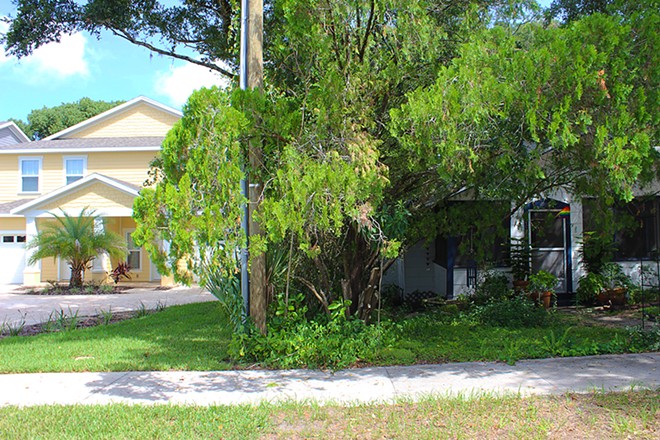 But for the past two years, Fairchild and Uva have watched their neighborhood and quietly worried that the sanctuary they've created will slip away. Two bungalows that used to be next to their home were razed and replaced with shiny yellow two-story duplexes with bright-green lawns. Additional cars on the street sometimes block their mailbox. At an average rent of about $2,100 a month for a three-bedroom, two-and-a-half-bathroom unit, the duplexes are inaccessible to the couple, who fear they and other renters who live in the Milk District because it's affordable will be pushed out in the next cycle of gentrification.

"Matt is a mover and shaker, and I've had my hands in community," she says. "We would be gone. Not to say we're a huge asset, but we're involved in this community, and I think that matters."

Their fears were amplified after online outrage over reports in the media about the developer who owns the duplex near their house and other land in the neighborhood. Adam Wonus owns 25 properties; most of them have already been developed into duplexes and have tenants. By the end of this year, Wonus says his plans for 50 to 60 units on his properties should be complete. The outrage comes at a critical moment for the players in this emerging part of Orlando. The majority of those new units are finished, and neighborhood business owners are close to instituting a Main Street program in the Milk District, like the ones in Mills 50 and Thornton Park.

Beneath the debates over gentrification, growth and displacement, there's an underlying question that has yet to be answered: What can a neighborhood that's inevitably flourishing do to preserve the scrappy spirit that made it special in the first place?

So what exactly gives the Milk District its eclectic character?

Lee Wortman of Sportstown Billiards on Robinson Street has some idea. Wortman and his wife have owned this popular hangout since the 1980s, though it was first established in 1958, several years before Beefy King and the Plaza Live theater, two of the oldest businesses in the Milk District. With its extensive craft beer selection and broad range of games like pool, Ping-Pong, shuffleboard, cornhole and Skee-ball, Sportstown Billiards is not only a business in the Milk District – it's a third place, a public space besides home and work where locals gather, interact and create a community.

In the past decades, Wortman says he's seen businesses open and close in the neighborhood, starting with the English pub Bull & Bush in 1987 and continuing through trendy spots like Etoile Boutique, Drunken Monkey Coffee Bar, Pom Pom's Teahouse and Sandwicheria, the Milk Bar, Spacebar, Gringos Locos, Se7en Bites and the Market on South. He's watched Tasty Tuesdays become the most popular gathering of food trucks in Orlando and bring extra business to his own establishment. And he's also observed how his clients have changed since he first bought Sportstown Billiards.

The workers from the T.G. Lee Dairy plant and officers from the now-closed Orlando Naval Training Center who sought affordable housing have been replaced by young people in the service industry and creative fields, along with retired older folks on fixed incomes seeking low rents.

Renters living paycheck to paycheck aren't unique to the Milk District. A study released in 2015 year by the Harvard Joint Center for Housing Studies shows renters in the metro Orlando area have a median household income of $35,190, but midpoint rent costs are $1,030. The majority of area renters are considered "rent burdened" because they spend more than 30 percent of their income on household costs. About a third of renters in Metro Orlando are considered "severely rent burdened," which means they spend more than half of what they make on household costs.

Wortman says his customers' main concern with the new duplexes in the neighborhood is a rent hike.

"I'm all out for sprucing up the neighborhood, and some of those places need to be torn down," he says. "But if my customers are concerned, sooner or later, I will be concerned because if they can't pay rent, they can't come to Sportstown to play pool. People who live there won't be able to afford to leave their houses, and it becomes a trickle-down effect."

Places like Sportstown Billiards created the character of the Milk District that attracted Adam Wonus.