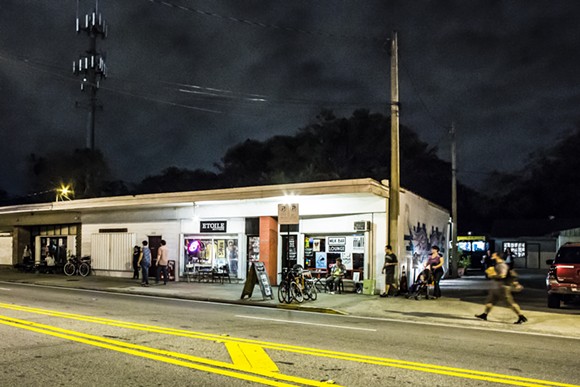 Rob Bartlett, bartlettimage.com
The Milk District
In case you haven’t heard already, a developer is planning some big changes to the Milk District. Local Facebook and Nextdoor feeds have been buzzing with the news that young developer Adam Wonus has amassed between 50 and 60 properties in the Orlando neighborhood that stretches east to west from Bumby Avenue to Crystal Lake Drive and north to south from Robinson Street to the 408, and hopes to acquire as many more as he can.

His plan, according to the Sentinel's story, is to raze these buildings (mostly single-family homes built in the 1940s) and put in around 120 units of duplex townhouses. He’s already torn down 25 of them.

The Milk District is home to a variety of independent shops, bars and restaurants. Numerous small business owners have been able to take a risk and try out new ventures because of the relatively low rents combined with the built-in pocket of residents. Those residents, a mix of older longtime homeowners and younger renters looking for houses and yards rather than cookie-cutter downtown apartments, have responded by patronizing those bars, restaurants and shops.

The vibrant little neighborhood has a fierce sense of community and is one of the most walkable areas in Orlando, which has attracted even national attention.

So locals are nervous. This looks like the beginning of a classic gentrification move (which Wonus’ claims of wanting to turn the place into "the next Thornton Park" don’t do much to assuage): a community of arty people make something hip out of old, cheap property, and then a developer comes along to capitalize on their efforts while simultaneously pricing them out of the area. If that doesn’t raise any red flags, you probably don’t drink at Bull & Bush very often.

There has also been some lamentation that the Ohio native’s plans don’t call for shade trees and that we’ll be losing some historic structures. And people familiar with other buildings of Wonus’ say that the character of his homes is too generic for the area, with one Facebook commenter calling them "drywall boxes," an architectural motif all too familiar to Orlandoans.

We’ll follow up with a more detailed report in the coming weeks.