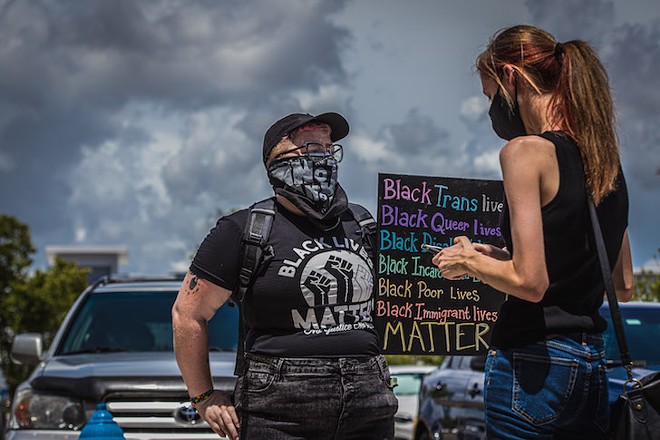 Hi, all. This month, I'm excited to join Orlando Weekly as their new staff reporter. Previously a freelance journalist and radio news anchor in Tampa, I've reported in the past on a variety of issues, ranging from criminal justice, to labor, housing, local government, and other social and economic justice issues I'll be keeping an eye on in Central Florida as well.

I'm also not new to Orlando Weekly. If you've read about union activity among Starbucks workers in Oviedo and Winter Park; Disney workers fighting for an $18 minimum wage; Orlando International Airport workers organizing for better wages and working conditions, faculty organizing at Valencia College, CPAC 2021, or the successful campaign to win a $15 minimum wage in Florida in 2020 — you've read my work! For nearly two years, I contributed to Orlando Weekly as a freelancer, and I'm thrilled to have the opportunity to join the weekly on staff.

Prior to this, I worked multiple jobs to make ends meet — like Orlando, Tampa has also seen a staggering rise in rent prices and cost of living. I've worked as a freelance reporter, a copywriter, a news anchor for the beloved community radio station WMNF in Tampa, and as a captioning assistant for a call center — where I captioned phone calls in real time for hard-of-hearing folks across the country.

But my career as a reporter kicked off in 2020, when I began reporting for Orlando Weekly's sister publication Creative Loafing Tampa Bay, covering demonstrations associated with the Black Lives Matter movement, and police accountability. From there, I moved on to coverage for both local and national publications on politics, organized labor, government accountability, and other intersecting issues that directly and indirectly affect the lives of everyday people — like you, reader, and me.

From the start, I've always been interested in helping to fill the gaps of where media coverage is lacking, while doing what I can to uplift the work of other journalists producing meaningful, valuable work for their respective communities.

But I wasn't born a reporter. (Honestly, that sounds like a nightmare of a delivery — you're welcome, Mom.) I'm a former military brat who has spent time overseas, a singer, a former musical theatre geek (any mention of a musical produced post-2012, unless it's Hadestown, will get a blank stare in response), a voracious reader, a mediocre ukulele player, someone who's always eager to learn and who is highly susceptible to getting sucked into a rabbit hole concerning some highly niche/fascinating topic at least once a month. I appreciate good craft beer, a stellar Old Fashioned, an occasional cigar, and live music.

With that, I'm looking forward to exploring what the Orlando area has in store for me, and likely bumping into one, two, or more of you out in the wild.

Now, what about you? Are you organizing for change in your community? A shop steward for your union, or thinking of organizing your workplace? Someone who lives and/or works in the Orlando area and just wants to say hi?

If you have information/news tips/stories/insight into the Orlando area (or its power players), feel free to get in touch by email at [email protected] or find me on Twitter at @SheCarriesOn.