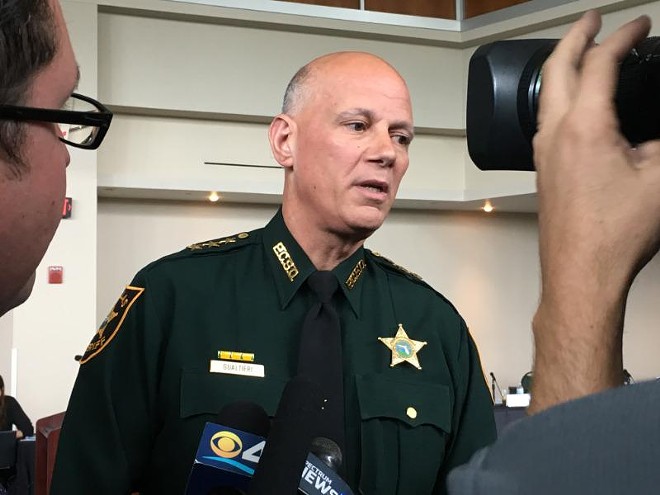 Photo via News Service of Florida
Problems with the communications system exposed by the response to a mass shooting at a Parkland high school aren’t isolated to Broward County, according to testimony at a meeting held by a commission tasked with preventing future catastrophes.

The Marjory Stoneman Douglas Public Safety Commission on Wednesday grilled officials from Broward County, Coral Springs and Parkland over the response to 911 calls during the Feb. 14 shooting that left 14 teenagers and three faculty members dead.

Gov. Rick Scott created the task force to explore the circumstances leading up to the assault —- the second-worst school shooting in the nation’s history —- as well as the response by law enforcement and school authorities. The panel will make recommendations with the goal of preventing future disasters.

The commission spent part of Wednesday exploring the confusion sparked by 911 calls from frightened teenagers inside the school, parents seeking information about the disaster and others trying to report the sounds of shots being fired.

Depending on how they were made, the emergency calls were answered by several entities, including Broward County and the cities of Coral Springs and Plantation, as law enforcement officials from various communities responded to the shooting and calls from one call center had to be transferred to another.

But the issue of transferring calls from one law enforcement agency to another during a disaster isn’t isolated, according to Pinellas County Sheriff Bob Gualtieri, the chairman of the commission.

“People here shouldn’t be thinking this is a unique situation or problem to Broward County. It’s not,” Gualtieri told reporters during a break.

Emergency calls from Parkland are shepherded by two separate communication centers, depending on whether the caller uses a cell phone or landline, local officials told the commission on Wednesday.

Landline calls are directed to the regional call center at the county —- which is also responsible for responding to public safety emergencies in Parkland —- while cell phone calls are routed to the Coral Springs call center.

That meant that calls from students and faculty trapped inside the school and families calling 911 on their cells were directed to the Coral Springs communications system, even though Coral Springs is not the primary law enforcement provider for Parkland. Those calls then had to be transferred to the regional communications system, which then conveyed the active shooter information to Broward County deputies.

Tracy Jackson, director of Broward County’s Regional 911 Emergency Services and Communications, defended the county’s response system when questioned by members of the commission on Wednesday.

“The system itself, it worked how it was designed to work,” Jackson said, drawing a rebuke from panelist Max Schachter, whose 14-year-old son, Alex, was among the slain students.

“So, are you saying that you expected the system not to work?” Schachter said.

Due to the call transfers, Broward deputies “had a void of information because they were not getting the first-hand calls that were being made from Stoneman Douglas,” Gualtieri told reporters.

Emergency calls from landlines were routed to the county’s emergency system, Gualtieri pointed out.

“But the firsthand information, the important calls, the calls that were coming from the school, weren’t from landlines, they were from cellular phones. So they were going to the police agency that was not responsible for the response to Stoneman Douglas,” he said. “That resulted in a delay to BSO, who is the primary responding law enforcement agency that is not getting the information as timely as they should, had it been coming into their communications center.”

Transferred calls are among the biggest concerns in an emergency response, Gualtieri said.

“Who in the world thinks that when you call 911, and you tell your story because you’re in trouble and you need help right now, somebody’s going to say, ‘Hold on a minute, I’m going to transfer you to someone else,’ then you’ve got to tell your story a second time,” he told reporters. “That’s what’s happening here in Broward County. That’s what’s happening in other places in Florida. When you have 911 calls going into a specific place, but the people who are going to help you aren’t affiliated with the place where the call is going to, that’s the problem.”

Sen. Lauren Book, a Plantation Democrat who serves on the commission, asked other members of the panel if Broward County’s communications system was similar to those used in other areas of the state.

“It is different all over the state and some of us have the same issues,” Gualtieri explained. “In Pinellas County, we have 24 different cities. There are 13 different cities that we contract with where we are the police provider. Some of the other larger cities have their own dispatch. St. Petersburg is an example.”

Gualtieri said consolidating emergency systems to a single system reduces redundancies and provides comprehensive services. He also stressed 911 systems should be designed so that a dispatcher can immediately provide the caller with the help that is needed.

And, the sheriff said, other factors are also involved when cities and counties determine how their emergency responses systems should be constructed.

“Politics comes into this. There’s no doubt about it. Politics is a big player in these decisions. Sometimes those barriers need to get broken down and people just need to get along and figure out a way to get this in the most efficient and effective way for the delivery of public safety services. A lot of times they think they are, but they’ve got to get beyond these issues in different places,” he said.