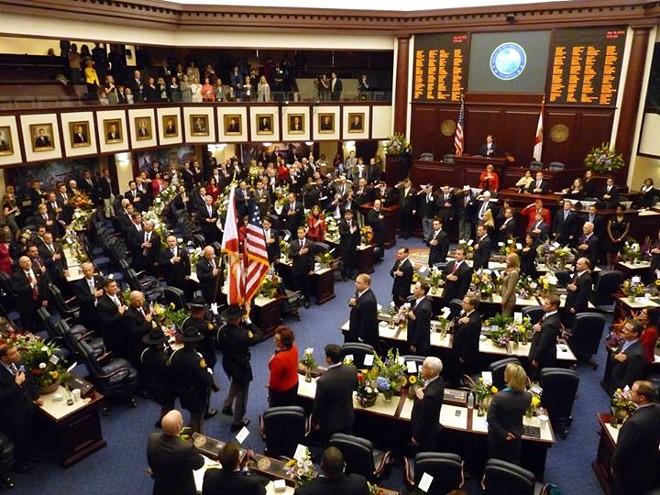 Photo via Florida House of Representatives
A sprawling, 278-page education package affecting everything from charter schools to school uniforms emerged from the budget process Friday, raising new questions about transparency in the final days of the legislative session.

The legislation (HB 7069), unveiled after 4 p.m. on the next-to-last business day of the session, would settle most of the major education issues that confronted lawmakers during their time in Tallahassee this spring. A final vote on the nearly $419 million proposal is scheduled for Monday.

It would encourage charter schools to open up near academically struggling traditional public schools, while also allowing traditional campuses to seek funding to provide additional services to students. It would expand the "Best and Brightest" teacher bonus program, limit testing in public schools and designate September as "American Founders' Month."

In a move likely to be popular with some parents, public schools except for charter schools would also be required to provide 20 minutes of recess to elementary students.

"I think that is going to go down as one of the greatest K-12 bills in the history of the state of Florida," said House Speaker Richard Corcoran, R-Land O' Lakes.

But the move to cram dozens of provisions into a budget-related bill that is essentially a must-pass for lawmakers revived a discussion about transparency in the negotiations over a spending plan for the year that begins July 1.

Corcoran pledged in the run-up to the session that this year's budget process would be one of the most open and transparent.

But while the Legislature made strides in revealing which members were behind projects slipped into the budget, negotiations over several portions of the budget —- including the education bill —- took place largely behind closed doors.

Legislative leaders defended the process again Friday, particularly in regard to the education bill. Corcoran portrayed the budget process as an extension of his effort to exert legislative authority.

"Under Article III (of the state Constitution), we have that right," he said. "And I've said it to you guys from the beginning: One of my biggest criticisms coming in as speaker was, we're the body closest to the people, the Legislature. And what we're going to do is, we're going to go out there and we're going to grab that authority."

Corcoran and Senate President Joe Negron, R-Stuart, also said that many of the ideas incorporated into the budget “conforming” bill have been debated elsewhere.

"These are issues that have been part of the legislative process for a long time," Negron said.

On one of the most closely watched education issues, lawmakers revamped the House's "schools of hope" proposal. That $200 million measure was originally aimed mostly at encouraging charter schools with a track record of helping academically struggling students to open branches near traditional schools that continually do poorly on state report cards.

The new proposal would cost about $140 million, but traditional public schools would also be able to request up to $2,000 a student from the fund to help with programs like "wraparound services," including health care and after-school programs, that might address students' needs outside the classroom. That was a chief priority of the Senate.

As for the "Best and Brightest" teacher bonus program, the plan would vastly expand over the next three school years before tightening eligibility again. Every teacher rated "effective" on his or her evaluation would get $800; those rated "highly effective" would earn $1,200.

Beginning in the 2020-21 school year, teachers would once again be required to perform well on certain standardized tests to earn a bonus of $6,000 a year. But more tests would be eligible for the awards, the mark to make would be slightly lower than it is now, and students who graduate from college with honors would face an even easier bar.

The measure would also do away with the Algebra II end-of-course exam, make it optional for school districts to use a state measurement of student learning in teacher evaluations and study using college-entrance exams to replace some state high school tests —- part of an effort to ease the testing burden in public schools.

Democrats approved of some of the changes, taking credit for helping to push leaders to alter the “schools of hope” language.

"At the end of the day, we take that away and we feel good about the fact that we tailored and tamped down the original `schools of hope,' " said House Minority Leader Janet Cruz, D-Tampa.

But they also raised concerns about putting together largely popular measures, like those on teacher pay, with more contentious ideas, like some language on teacher contracts that Democrats oppose.

"I hate the fact that you take good legislation, and you mix it with bad things," said Rep. Shevrin Jones, D-West Park. "It basically forced our hands in a lot of areas."

The bill also came perilously close to a replay of 2011, when a rebellion among Republican senators contributed to a rocky end to the session. Many of those senators were unhappy with the use of budget-conforming bills to pass major policy changes.

Sen. Bill Montford, a Tallahassee Democrat influential on education issues, indicated late Friday that he had similar qualms this year.

"I for one have concerns that perhaps the whole structure of the conforming bill maybe has expanded too much," said Montford, who also serves as head of the Florida Association of District School Superintendents.

Lawmakers also approved legislation on Friday that would increase funding available to students under the state's de facto voucher program and strengthen protections for expressions of religion in public schools. Those bills head to Gov. Rick Scott for his signature or veto.