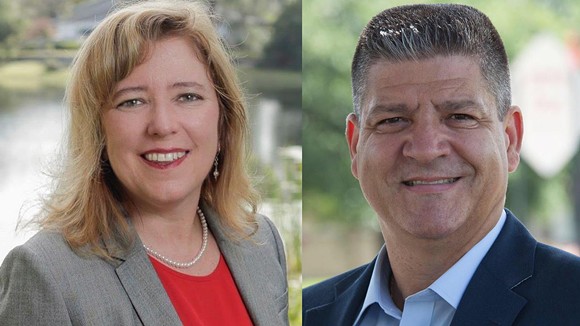 Photos via Goff-Marcil and Cortes 2018 campaigns
First-term state Rep. Joy Goff-Marcil picked up a new challenger on Tuesday, when Republican Bob Cortes filed to run against the incumbent Democrat.

If that name sounds familiar, that's because Cortes was once the state representative for District 30, which includes parts of Winter Park, Maitland and Altamonte Springs, for four years. He was unseated only two years ago, in November 2018.

The seat is a tossup, having switched parties frequently since the last redistricting. Until 2012, it was held by right-wing conservative Scott Plakon, who lost his re-election bid to Democrat Karen Castor Dentel. Castor Dentel then lost the seat in 2014 to Cortes, who won 51.4 percent of the vote. Cortes was re-elected once in 2016, against Democrat Ryan Yadav, winning 53.38 percent of votes, before losing to Maitland city commissioner and vice mayor Goff-Marcil, who claimed 52.9 percent of votes cast. (Castor Dentel went on to be elected to the Orange County School Board in 2018, and Plakon was elected back to the House in 2014, from neighboring District 29.)

Cortes filed his 2020 challenge from a P.O. box address in Altamonte Springs, and lists himself as the campaign treasurer. He has not yet filed any campaign finance reports. He announced the news with a Facebook post asking for ballot petition signatures on Wednesday.
"We only have a few weeks to try and make this push," wrote Cortes. "Please share!!!"

Cortes told conservative news site the Florida Report on Wednesday his decision to file was based on the economic fallout from the COVID-19 pandemic.

"More than ever the communities of House District 30 and the State of Florida is in need of true proven leadership to help guide us through the difficult times ahead," Cortes said.

Prior to winning the seat, Goff-Marcil was a Maitland city commissioner and named vice mayor. Her winning 2018 campaign was relatively homespun, releasing a music video called "Bring Joy to the House," produced by her kids and raising a total of $63,520 in monetary and in-kind donations. Cortes raised $365,846 in cash and in-kind donations in 2018, nearly six times as much.

Goff-Marcil already filed for re-election on Aug. 5, 2019, using a Maitland P.O. box. She lists her treasurer as Shirley Noel-Cornelison of Orlando. She has raised $18,170 in donations for her 2020 re-election. She currently sits on four committees, including Health & Human Services, Higher Education & Career Readiness, and the Public Integrity & Ethics committees.

State representatives serve for two-year terms with an eight-year term limit. The base salary is less than $30,000 annually, with a tax-free per diem of $152 during legislative session.