The lone Mills Park holdout looks for a way out 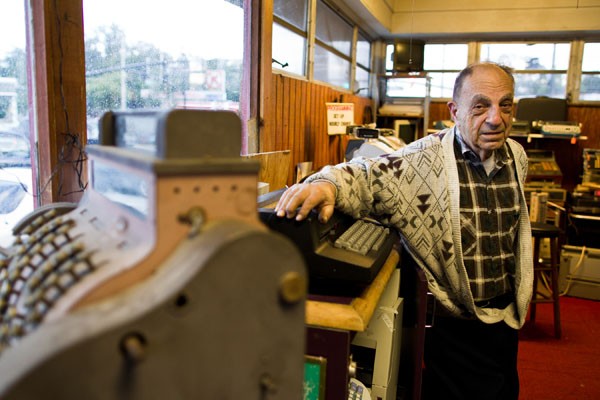 It shouldn’t be cause for alarm, but stepping into the sleepy retail storefront of Lust Cash Transactor at the corner of Virginia Drive and Mills Avenue is literally just that. The piercing rattle of a rigged alarm system attached to the front door makes for a strange welcome, as do the floor-to-ceiling pieces of historical electronic bric-a-brac – old computer monitors, brass cash registers, vintage typewriters – which recall the dusty attic of an old man with a hobby. That man is 80-year-old Mark Lust, the proprietor of this cash-register repair business for some 35 years and resident of the adjoining garage apartment out back. He is a relic of Orlando’s so-called ViMi District: the old, paved retail corridor that juggles Floridian character and strip-mall utility. Lust is a working man with a singular vocation who relocated to the City Beautiful in its darker days because it seemed like an “up and coming city.” Now, due to tough economic times (or just the passing of time in general) he’s fighting for his  professional life.

“Everybody walking in here says, ‘Boy, the city’s really got you in a squeeze,’” he says. “‘They’re trying to squeeze  you out.’”

Lust was the last holdout when developer Justin Pelloni brokered a deal in 2006 with the city to convert the old Mills-Nebraska lumber yard – a perennial symbol of urban blight – into what was to become a vital catalyst for redevelopment. Four years later, Mills Park remains a fenced-off vacant lot full of dirt. The Mills Park sales offices just around the corner from Lust are empty; the real estate salad days are over. Though Lust’s store remains open, it’s hardly thriving. That could easily be attributed to the outmoding of his services, but to hear Lust tell it, it’s the fault of the city and developers.

Recent road improvements funded by the Florida Department of Transportation have swallowed up the on-street Mills Avenue parking his patrons used, and the city’s rush to reimagine the region as a mixed-use paradise has effectively rendered his business an anomaly atop an eyesore. Lust is claiming that he’s a victim of inverse condemnation – meaning the city has made his property worthless and should buy it. The city asserts that he’s just a victim of the times caught up in a private property war beyond its control.

Mills Park was going to change everything, and then the bottom fell out of the economy. Pelloni finalized the purchase of the 15 acres – minus Lust’s parcel – in 2006, thereby realizing the city’s longstanding vision for a renovated regional hub. Initially the project included 78,000 square feet of restaurant and retail space, 272,000 square feet for office space and 564 residential condos, all at a cost of $350 million. There would be green spaces, theaters, parking garages and a portion of the Dinky Line Trail (a segment of the city’s vaunted “urban” bicycling path) to be paid for by Pelloni. It was ideal.

Until it started to fall apart. Pelloni partnered with Orlando developers ZOM Inc. (responsible for The Waverly and The Paramount condos downtown) in 2007 to develop the residential component, referred to as “The Hudson,” but by 2008 the plans were adjusted to match the economy: there would be 425 rental apartments instead.

Sometime in the middle of that transition, Lust began making headlines. The Orlando Sentinel reported in 2006 that he was holding out for $1.25 million for his 5,250 square foot parcel (he denies that number today). Pelloni reportedly attempted to offer $150 per square foot – or $787,500 (allegedly $287,500 for the property and $500,000 for a trust to aid his grown autistic son) – though Lust denies that either he or his lawyer ever received that offer.  Sort of.

“They never really wanted to negotiate or contact my attorney so we could climax the deal,” Lust says. “They said, ‘You don’t need an attorney. You don’t need anything. Just take the deal.’”

Justin Pelloni did not return calls for  this story.

According to City Commissioner Robert Stuart, ZOM has since pulled out of the project due to its own financial problems. A representative for Pelloni Development Corp. would only say that the situation was complicated.

“We have spoken to Mr. Pelloni and he is looking at some options in terms of further refining the project in order to move it forward,” says City of Orlando planning division manager Dean Grandin. Though the city and Pelloni spoke just a month ago, “there has been nothing definitive presented to us.”

Meanwhile, Lust’s distrust of the city has been growing. Earlier this year, the traffic lanes on Mills Avenue were widened to increase capacity for heavier traffic, which had the dual effect of removing on-street parking and speeding up the automotive traffic of potential patrons. It was an FDOT project (Mills Avenue is a state-maintained road), but it was sanctioned by the city.

“It’s unfortunate that some of those on-street parking places have been taken away,” Grandin says. “[Lust] and other businesses have suffered the same consequences. The city is trying to look at alternative locations on the side streets, but in that particular location at Virginia [Drive], it is very difficult.”

The renovation also brought changes to Lust’s driveway, which he says is impossible to park in. He complained to the city, so they sent a contractor out to grind down the curb.

But Lust’s real gripes come down to the property itself. He’s been “besieged” by code-enforcement inquiries – among those listed on the city’s website of public complaints are “building is full of junk,” disabled cars and boats on premises and rats – none of which have resulted in fines, he says, though they do provide some insight into what surrounding residents and businesses may think of Lust’s operation. And there are mixed signals about whether he’s actually allowed to improve his property in order to sell it without having to bring the entire parcel up to code. He says realtors have told him that his property is presently unsellable.

“In other words, if I put a fancy fence in front of my drive, my property becomes illegal,” he says. “If I sell the property, and [the buyer] says that he wants to go down to the planning department and get a permit, the building becomes illegal until he conforms to the rules.”

In effect, he has to keep the property exactly how it is in order to remain above board. The city says that he can continue to operate the business (and live in the garage apartment) as it is, but any substantial changes could require permitting.

In a complaint he wrote to the Weekly, Lust claims that the city has managed to discount his property to one having no value whatsoever. On Nov. 19, he sent a similar complaint to Commissioner Stuart’s office, alleging that Lust Cash Transactor had fallen prey to inverse condemnation by the city.

On Dec. 13, chief assistant city attorney Roy Payne responded to Lust’s complaint succinctly: “While there may be issues affecting the marketability of this property, it is our opinion that those issues do not form the basis of an inverse condemnation claim.”

“It’s not something that you see a lot,” Payne says. “And it really only happens when essentially the government, by regulation, takes the value of your property. For instance, if we down-zoned your property to conservation use, which didn’t have any value at all, that would be an inverse condemnation act that he would be able to file a  complaint on.”

It’s not an opinion that Lust shares. “If they say I don’t have a case, that means I have a case,” he says.

Commissioner Stuart, meanwhile, argues that this is a case between two private property owners, not one that involves any city interests. The parking spaces weren’t Lust’s to begin with, the zoning for Mills Park does not directly affect Lust’s business (in fact, the city installed utility lines above ground to avoid his property, taking them underground once they enter Pelloni’s site) and, by right, the city has no power to condemn Lust’s property. He may have just held out too long.

The alarm on Lust’s front door rings again, this time to the smiling surprise of a hipster girl in her 20s. She’s baked Lust a pie for the holidays with her broken oven. He is both charmed and charming. He’s also over it.

“I’d like to get out of the city. There’s too much aggravation. Just buy it out at a reasonable price,” he says. “I’m willing to get out.”