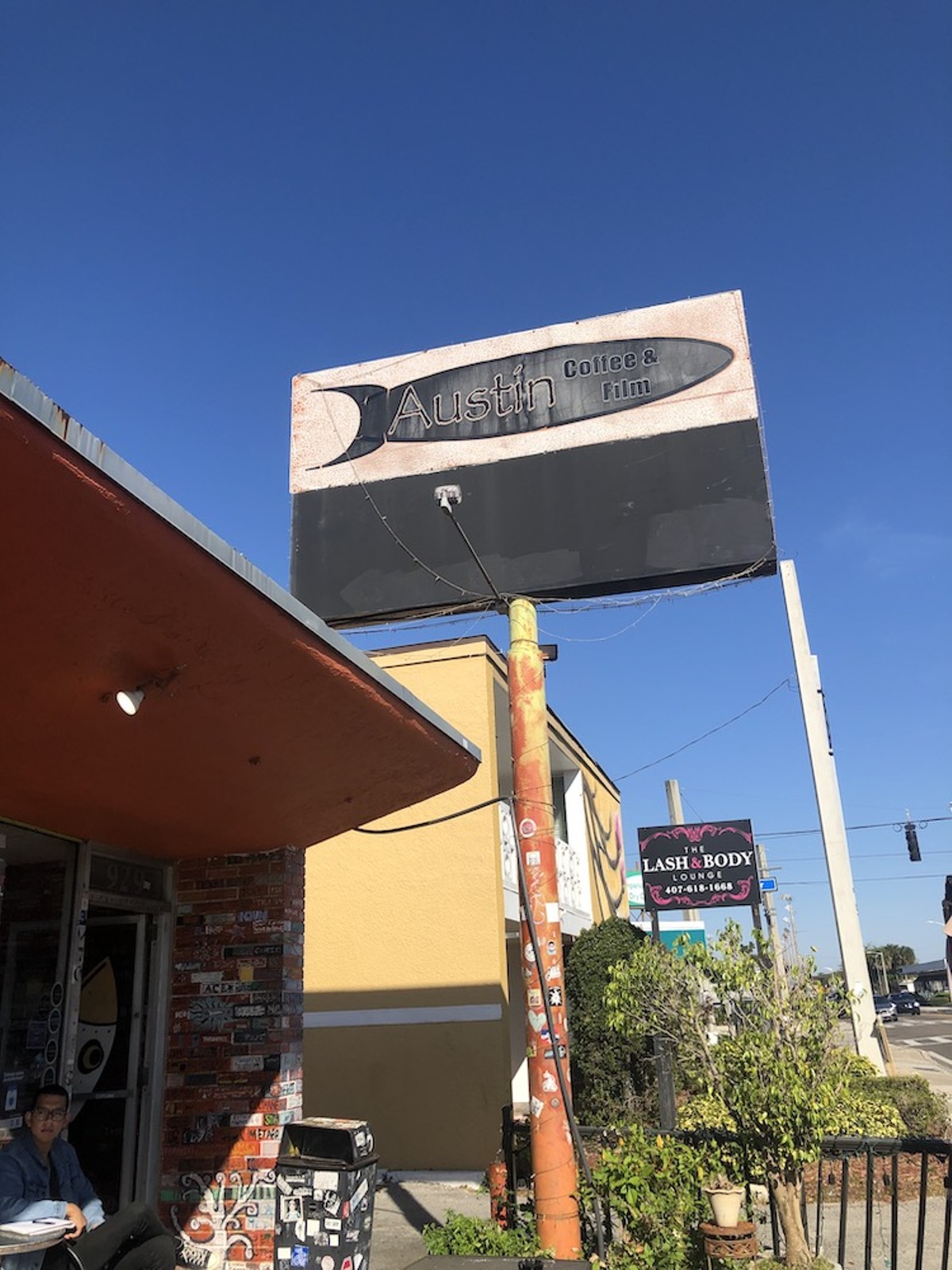 Most nights in the pre-pandemic world, one could sip a coffee or a beer and enjoy a muffin at Austin's Coffee in Winter Park while listening to poets, comedians or musicians hone their chops on stage. The walls are lined with paintings from local artists, available for purchase. For the past 18 years, the coffee house has served as a hub for local arts of all types.

That could all change soon if the city of Winter Park has its way.

According to a City Commission agenda item from the Feb. 24 meeting, the city is looking to purchase the buildings from 929 to 957 W. Fairbanks Ave., which includes Austin's as well as Vines & Forks by the Wine Barn, Delightful treats and Nail Alchemy. The intent is to help ease traffic along Fairbanks by adding another turn lane, and they'll do that by demolishing the buildings to make more space.

City of Winter Park assistant communications director Craig O'Neil told Orlando Weekly in an email that the project's intent was to "facilitate a dedicated turn lane along Fairbanks to improve traffic flow."

"The use of the remainder of the property, beyond that needed for the additional right-of-way, has not yet been decided," he clarified. "It, along with surrounding properties if acquired, could be expanded park, parking, sold for future development, or a combination thereof." These buildings back onto Martin Luther King Jr. Park.

Earlier agenda items discuss purchasing the properties currently occupied by Spatz Deli & Billiard Liquor and Krungthep Tea Time, and the city has already bought Imperial Dry Cleaners, at the corner of Denning and Fairbanks, for $750,000, as noted on the Feb. 24 City Commission meeting agenda. That land, according to the city, is crucial for any other road work further down Fairbanks to help with traffic problems around that area.

At that meeting, the city approved that deal and noted that the negotiations are ongoing with Avanti Properties, the owners of the land from 929 to 957 W. Fairbanks, and no deals have been reached yet.

The agenda page for the latter item says the owners have put forth a price of $3 million for the land. But no contracts have been signed yet.

Jackie Oswalt, one of the three co-owners of Austin's, isn't happy about what she sees as an attempt by the city to erase their art and cultural space.

"We want to stay," she told Orlando Weekly. "Austin's has been here 18 years and we've owned it for 16. Our children are here — my daughter works there. I had hoped it was always going to be a family business."

She says the landlords have been sympathetic and always supportive of Austin's and its arts scene.

"The landlords have been wonderful," Oswalt says. "They helped us stay open during COVID. They said they didn't want to sell. But the city might take it via eminent domain, and that would mean less money. But they could just take it anyway."

Oswalt says she is not aware whether the landlords were talking about a price or a contract to sell as of this week.

O'Neil later said in another email that the City Commission "has expressed a great reluctance to use eminent domain, so we are not sure that would be done."

Oswalt rattled off a list of some of the ways the arts community had been enriched by Austin's. There were numerous open mics throughout the week pre-pandemic (some are returning now), featuring everything from music to poetry to comedy. Comedians Preacher Lawson, who was a finalist on the 12th season of America's Got Talent, and Erik Myers, who worked the road for years and who recently passed away, often took the stage there for open mic. Oswalt said some people have written books there.

Kira Calvaresi has been associated with Austin's since moving to the area in 2015. A military kid, they said they spent much of their early life moving around. Austin's, according to them, became their closest thing to a home once they moved here.

"I used to host the poetry mic there," they say. "The creative space at Austin's was most significantly home to me. It was art of all mediums, and I could process my life and connect with the community."

Calvaresi said the opportunities Austin's offered artists were "much more valuable than a sidewalk and a turn lane" like the city was considering.

Marty Sullivan, City Commissioner for Seat 1 in Winter Park, says he "hears more about traffic than any other issue." But he also said he understood the appeal of Austin's.

"I've gotten impassioned emails," he told Orlando Weekly. "At least 30 people have told me about the value Austin's has for artists."

Comedian Jesse Chudeusz wrote on Facebook that he'd started doing comedy at Austin's and said it was a "treasured place" and a "landmark" that many comics and others had called home.

Comedian Kirk Bonacci says Austin's "has done more to help the local arts scene than any other place in the city."

Local resident Nathan Hall says he used to go there after getting off work in the area at around 2 a.m., calling Austin's "one of the last places in that area that feels working class."

A website has gone up at saveaustinscoffee.squarespace.com exhorting supporters of the venue to contact city staff. "This establishment has allowed countless people to further their art and personal development. ... The idea that the city would callously dismiss the importance of such a venue for nothing more than expanded parking shows the massive disconnect between the city commission and the community it claims to serve," reads the landing page.

Tania, another Austin's regular (who asked us to use only her first name), says Austin's is accessible and its appeal unique for the area.

"For a city as big as it is, greater Orlando doesn't have a lot of late-night spots (that aren't bars) for people to loiter and hang out," she wrote to Orlando Weekly. "Locals are being pushed out to make way for whoever is occupying all these new, ritzy developments."

O'Neil says even if the purchase does go through, city staff understands the value Austin's holds for the community.

"Austin's has been a fixture in Winter Park for many years and has a strong, loyal following," he wrote in an email. "If the city moves forward with the purchase, we hope to work with Austin's to continue at that location until such time as we can move forward with the traffic improvements or work with them on possible relocation opportunities."

Commissioner Sullivan, too, expressed a desire to "incentivize Austin's to continue" if a sale actually goes through.

Siamak Alavi, who owns the Wine Barn, told Orlando Weekly he thought the city's idea was a good one. As the father of soccer-playing children, he'd like to see more parking for Martin Luther King Jr. Park, where the soccer happens.

"It's not good for us [the store], but the buildings are super old anyway," he says. "You could have 50 kids playing soccer out there, and nobody has a place to park. If they want to widen the road, that's better than putting more big buildings up."

He says it would help with the new library on the other side of the park, too.

The Sir David Adjaye-designed library and events center going up on the Morse Boulevard side of the park is planned to open in the fall of 2021, according to the city website, and construction is well underway. There have already been local rumblings over whether there's sufficient parking.

"It's for the good," Alavi says of the city's road-widening project. "People may not realize it, and nobody likes change. But this could clean things up and make it right for everyone."

He said he would be particularly amenable if the city were willing to help the Wine Barn find a new location, and he intends to keep going with the business.

But Oswalt says for Austin's, that likely won't be a feasible solution.

"It's frustrating," she says. "You can't just move a business — it's not just a real estate office, it's not just a phone and some desks. It could cost $100,000 for a new buildout, and half of that ends up being code stuff, putting the plumbing in certain spots to satisfy the health department."

She points out one example of something that couldn't be replaced in a new building: the Morgan Steele mural in the men's bathroom.

"It was the last thing he did before he died. He died the day he finished painting it. You can't replace that. There are bricks painted by people through the years. The art is irreplaceable."

To Oswalt, it just seems like there are forces working against her.

"It feels so targeted," she says. "Like we don't match with the fancy image of Winter Park. We are more Bohemian here. I always felt like there wasn't love for us."