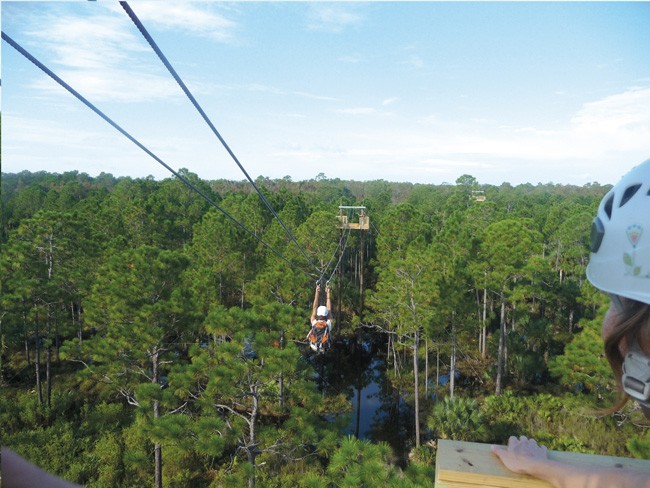 So far this year, I've cuddled kangaroos, met manatees and paraded with elephants through Parramore. But last week, my environmental adventures achieved new heights – literally. Thanks to Forever Florida, I plunged with a peregrine, pounced like a panther and got bit by a rattlesnake, and somehow I survived to tell the tale.

This excursion started with an hour-long drive south of Orlando, deep into the uncharted wilds of St. Cloud. Follow 441 past Kissimmee into Holopaw (home of ramshackle bars, dirt-cheap gas and not much else) until you spot the flags marking Forever Florida and the Crescent J Ranch, home of Florida EcoSafaris' new EcoParkattraction. While cautiously evading the peacocks that have claimed Forever Florida's front drive as their own, you'll traverse a narrow dirt road to the facility's welcome center, a large lodge in the traditional Florida Cracker style complete with rocking chairs and resting cats on the wraparound porch.

Three years ago, the conservation facility had made its first foray into offering adrenaline-inciting activities, after a decade of offering conservation-minded truck and horseback tours of the 4,700-acre wilderness preserve. Back then, the mile-long arboreal cable complex was groundbreaking, but today every roadside attraction seems to have its own “extreme” ropes course. To stay in the game, Forever Florida completely rebuilt its zipline course, abandoning the 50-foot-tall swaying scaffolding I scaled in 2009, when the ziplines first opened, in favor of sturdy new 70-foot-tall towers. The new structures, which resemble something the Swiss Family Robinson might have built with unlimited access to Home Depot, provide breathtaking 10-mile views in every direction over the unspoiled cypress treetops.

The seven-slide Zipline Safari is now one of the area's longest ziplines, but it isn't the EcoPark's headliner – that would be the Rattlesnake, the nation's first “zipline roller coaster.” While traditional ziplines simply send you from point A to B in a straight line, the Rattlesnake features an innovative serpentine steel structure that generates turns, drops and dips similar to those you'd encounter on an inverted roller coaster like Montu or Dragon Challenge (without the loops, of course).

Rattlesnake's track appears deceptively short from a distance, but once you're attached by a snug full-body harness, the intensity packed into its sinuous 1,000 feet becomes apparent. Ever seen that kids' toy that features a bead that slides along a wiggly wire? This is your chance to find out what the bead feels like. The minute-long flight begins placidly, but by the time you hit the first curve, your feet are skimming inches from the trees and your throat is in your mouth. Each drop in the track is only a dozen or so feet, but you experience utter free-fall for a split second before your harness grabs hold and the intentionally flexible track bounces you back up like a bungee. I've experienced dozens of high-tech thrill rides, but never anything as terrifying as Rattlesnake's double-dip finale, which threatens to plunge you into a murky pond (soon to be stocked with live gators) before swinging you screaming into the station.

After Rattlesnake, I took the Peregrine Plunge, a tandem zipline that allows two riders to race at up to 30 mph along 1,300 feet of wire. It's easily the longest such ride in Florida, with speed and sights beyond any similar slide I've seen. Panther Pounce, the final challenge I faced, is simplicity itself: step off a 68-foot platform into thin air, and fall face-forward toward the ground before the stuntman-style descender arrests your impact. The danger is purely psychological,but that first step is a lulu.

At $135 for all six adventures, a day at the EcoPark is plenty pricey, but word is spreading among visitors seeking a less plastic vacation. The day I visited, I met a German family who found Forever Florida through their local newspaper. I'm excited to return soon to try the canopy cycles and “swooping crane” swing.But I'm more excited that someone is turning thrill-generated tourism dollars toward preserving what's left of wild Florida.