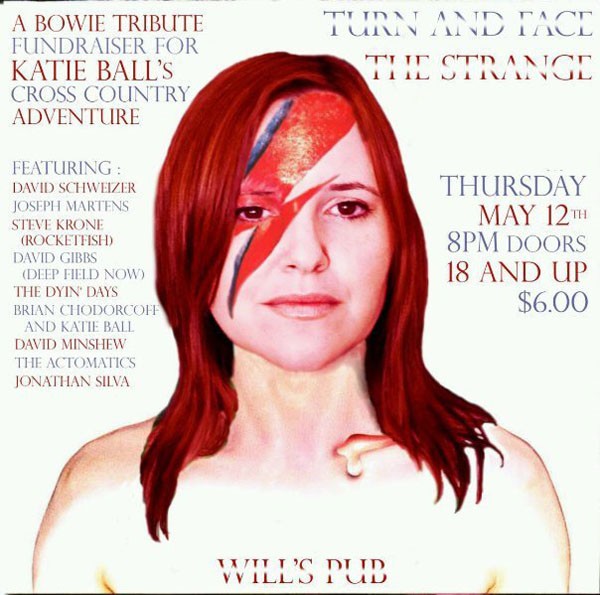 It's Friday evening, and total mayhem is about to break loose. Artists and vendors are lining Virginia Drive between Haven Drive and Dauphin Lane in anticipation of MAYhem, the first Second Friday street party organized by the nonprofit Ivanhoe Village community association. It seems the latest addition to Orlando's growing art stroll calendar has everything for success, including a small stage for musicians and dancers to perform on and a parking lot full of food trucks - including Treehouse, Korean BBQ Taco Box and Yum Yum. But just as the fun is about to get started, the skies open up, drenching attendees and sending the DJ scurrying to cover his electronics.

Why did this happen? You can claim that precipitation is a permanent part of life here in Central Florida, but I don't go for all that meteorological mumbo-jumbo. The answer seems obvious to me: The god of Orlando arts is crying because Katie Ball is leaving town.

Flash forward to the following morning. The sun is bright as I pull up to a cozy house. Along the driveway lies the decor and detritus Katie Ball collected during her 18 years in town, now displayed for yard-sale scavengers. As I sift through her discarded books, I discover well-worn copies of The Tao of Pooh and Blue Highways and express surprise that she would part with them. "I don't need [the books] anymore," she replies with a wink, "because I'm living it."

At this point, if you're scratching your head wondering "Who is Katie Ball?" you must not have been paying attention to Orlando's music and culture scene during the past two decades, because Ball has been right in the middle of it. A native of Fort Myers, Ball originally moved here mostly because this is where her favorite band (Bughead) was based. Back when she arrived, Scruffy Murphy's was still downtown and had food but no televisions, and places like Skinny's and Visage were still going concerns. Katie quickly made a name for herself as a photographer, writer, musician and radio personality. She's been a teacher at Crealdé School of Art, done public relations for the Global Peace Film Festival, and most recently was programming director at Urban ReThink.

Ball is probably best known as a radio producer and host at WPRK 91.5, WUCF 89.9 and WMFE 90.7, where she contributed to The Arts Connection, Marketplace and StoryCorps. Asked what she'd most like to be remembered for, Katie cites the bluegrass show she hosted on WPRK and Any Cool Music?, the book she authored on local sounds. Mostly, she'd like to be remembered as someone who passionately promoted Orlando's artists "for the right reasons": She may not have made money, but this town's culture is undeniably richer for her support.

After a year of personal and professional challenges, Ball recently decided to do a "midlife reboot" and hit the road on the cross-country adventure she's long dreamed of. She leaves June 1, bound for Ocean Springs, Miss., where she'll interview a childhood friend's father who discovered a sunken Spanish treasure ship. From there she'll "ease over" to Austin, Texas, and eventually on to Denver, with intervening destinations still "up in the air." "If I really love a place I'll stick around and check it out," Ball says. "I'm pretty Zen about it." While she'll keep details of her itinerary under wraps for safety ("I'm a loon magnet," she jokes), you'll be able to follow her progress through reports filed on radiokuralt.com.

Much like her hero, radio pioneer Charles Kuralt, Ball will be traveling solo along America's scenic highways. But instead of a tricked-out RV, she's packing her life into her PT Cruiser: a bed in the back, thermal curtains to block out the light and a two-burner Coleman gas stove for a kitchen. As I crawl into her miniature mobile home, I'm more than a little jealous at her ability to pare her possessions down to the bare necessities, with little but a cargo hammock and jury-rigged shelf to contain her earthly possessions.

As much as Orlando will miss Katie, there's plenty Katie will miss about Orlando. For starters, she'll miss Will's Pub, which she says has "done more for the local culture that matters to me" than any other establishment. More broadly, Ball will miss the arts community, saying "there's no other place like it." Finally, she has fond feelings for local food culture, singling out the Vietnamese district along Colonial ("it makes us so big city"), Beefy King and Cecil's Bar-B-Q.

Katie is sad to be leaving, "but also euphorically happy" to embark on her adventure. She's not gone forever, but while she plans to come back some day, she doesn't know in what capacity. Until that day, I've got Katie's Ira Glass comic book and her dining table to remember her by. The rest of Orlando will have to comfort themselves with archives of Katie's old radio broadcasts, along with her legacy of enthusiastic arts encouragement.