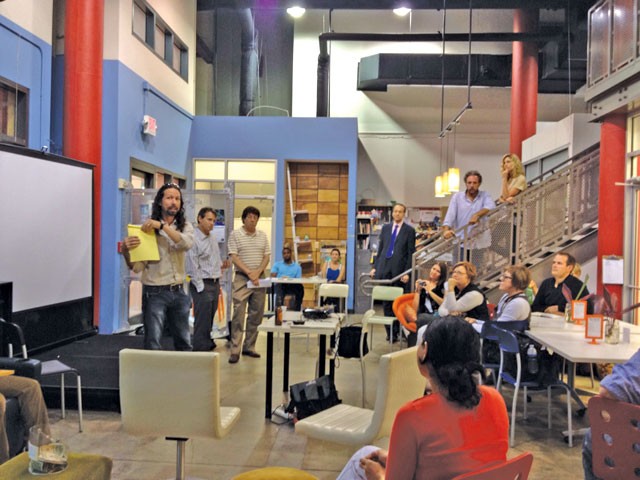 Anna McCambridge-Thomas has worn numerous hats within Orlando's artistic scene – producer of Visual Fringe, publicist for Orlando Ballet, curator of OMA's 1st Thursdays – but Collide*scope might be her best contribution to the community at large. The monthly event, launched at Urban ReThink in February 2012, brings people from diverse backgrounds together, giving them a challenge and one week to come up with some kind of presentation about possible solutions. Thanks to a collision of politics, passion and strong personalities, last Monday night's gathering turned into one of the most electric evenings I've ever attended at the ex-bookstore.

"The challenge is always something that is pretty big, and related to the area and our community," McCambridge-Thomas said as we waited for the evening to begin. "It's always interesting to see these people from different backgrounds working together on something that maybe only one of them has worked on, and the other three or four people who are participating have no idea what it's about, so they are coming to it with a fresh perspective that hasn't been tried before."

I was present at the first Collide*scope, which focused on helping cyclists and motorists better share the road. That effort produced sample skits featuring fantasy conversations between a bicyclist and driver; six months later, those skits are being recorded for radio PSAs.

As important as cyclist safety is, this month's Collide*scope tackled an even more intractable issue: homelessness. Orlando's population lacking permanent housing varies depending on who's counting. According to statistics shared during the presentation, the Department of Housing and Urban Development calculates 2,800 people go homeless in Orange County nightly; using the Department of Education's metrics, that number jumps to 6,000. Either way, it's a staggering figure that grows each year, making the Orange County Jail by default our largest homeless shelter and mental facility.

Nobody could expect to cure such an entrenched ill in a week, so Collide*scope's collaborators were charged with a more modest goal: developing a set of simple tasks anyone can perform to help the homeless feel "more safe and needed."

According to the quartet's PowerPoint presentation, even though the public appears to "tolerate homelessness" (our nation spends more money on alcohol every week than we do to combat homelessness), they began with the assumption that citizens want to help, but are afraid that donated cash will be misused. On the other hand, simply giving food isn't enough, because the homeless require cash to survive; even the Salvation Army shelter charges $9 per night.

Their innovation is called "iCare," and it's intended to supplement existing programs (like the city of Orlando social services map and the United Way 211 help line). A sticker is affixed to the user's permanent ID and embedded with a QR code, which links to an online profile established with a social services worker. Smartphone-carrying donors could scan an iCare code and instantly deposit credits which could then be redeemed for lodging, food or bus passes (but not lost, stolen or spent on beer). Churches and volunteer programs could give out iCare points instead of handouts in exchange for attending classes or programs.

Most of the presentation was ably hosted by Jessup, with Dippy providing details and statistics. Seghers (who will be leaving Orlando for New York by the time you read this) spoke movingly about meeting "Jay," an HIV-positive panhandler with a gift for impressions and improvisation, outside a downtown club. And Segal, who helped found the Coalition for the Homeless, demonstrated both his interest in the issue and his sense of humor.

I was intrigued by the proposal, but I'm concerned about user privacy and the creation of a parallel economy that potentially further isolates beneficiaries. My caveats were echoed by "Jose," a self-declared former homeless man and current businessman, who spoke passionately (if somewhat incomprehensibly) about hopelessness exacerbating chronic homelessness. Jose became so agitated over alleged corporate indifference toward the indigent (Cameron Kuhn "went down like a piece of crap," he colorfully claimed) that he was escorted out, a first for this event series.

The next Collide*scope is scheduled for Monday, Oct. 8; in the meantime, this month's contributors will try to work out the kinks in their concept. Whether or not they're ultimately successful, I hope their efforts can help take the edge off Orlando's national reputation as one of the meanest cities toward the homeless.