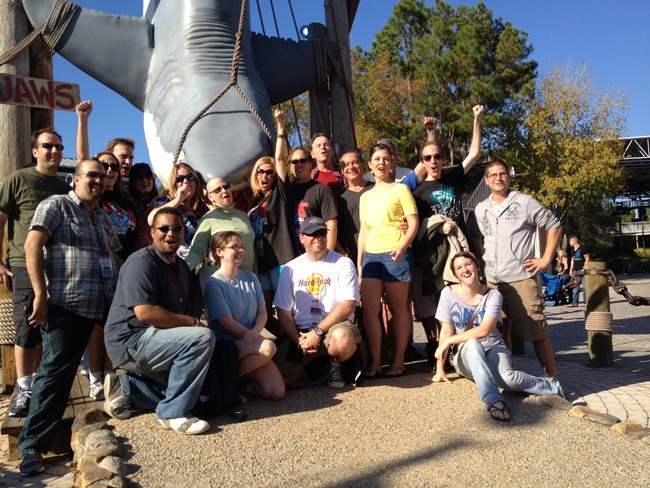 It’s always hard to say goodbye to an old friend, even if your buddy is gray, cranky and often all wet. But there was hardly a dry eye (or seat) in the boat last Saturday afternoon, when I set sail with a boisterous crew of former skippers for a final farewell to Bruce, the synthetic shark star of Universal Studios Florida’s soon-to-be-extinct Jaws attraction.

On Dec. 2, Universal announced that the classic ride, based on Spielberg’s 1975 blockbuster film, will shut down after Jan. 2, 2012, for a new “attraction experience.” (Smart money is on more Harry Potter, with a train ride connecting to Islands of Adventure for two-park ticket holders.)

Theme park attractions come and go: But Jaws was something special and deserves a moment of tribute. It was one of Universal’s opening-day headliners and featured prominently in early advertising – remember the great white sharks bulging off I-4 billboards through the ’90s? Along with Kongfrontation, Earthquake, Ghostbusters and Back to the Future, Jaws was one of the signature elements of Universal’s brand before Islands of Adventure opened.

Ironically, though Jaws became popularly tied to Universal Studios Florida’s identity (it’s a plot point in Kevin Smith’s Mallrats), today’s version of the ride isn’t the same one that guests experienced on opening day in 1990 – or, rather, tried to experience, since Jaws’ original incarnation, featuring a shark biting and turning the guests’ boat and a climactic geyser of gory shark chunks, broke down so frequently that it was boarded up after barely one summer. Several aborted repair attempts and a lawsuit later, a rebuilt Jaws finally opened in 1993 with a radically revamped finale based on Jaws 2’s electrifying ending.

In the 18 years since the current ride opened, it has weathered ups and downs. Jaws was shuttered for most of 2005 to save on pyrotechnic propane and only operated sporadically through 2007, and the waterlogged animatronics always seemed in need of an expensive refurb.

Still, Jaws engendered passionate advocates, thanks in large part to the skippers who shepherded a new boatload of riders through a dramatic near-death experience every five minutes. Jaws was one of themed entertainment’s last, best blends of technology and thespians. The best skippers could elevate a cheesy carnival thrill into a high-camp epic with their over-the-top performances, inspiring a raft of tribute videos on YouTube (including a meticulously made mock-opera).

Walt once said he didn’t want Disneyland to be a museum, and likewise, no one is suggesting Universal Studios Florida remain a graveyard for forgotten film franchises (I’m looking at you, Twister and Fievel). But if you assumed that when euthanizing one of its most iconic attractions, Universal would shrewdly leverage the resultant fan reaction, you’d be wrong. Aside from a short press statement and postcards mailed to annual-pass holders, little has been done to lure fans for a final tour, nor has any formal closing commemoration been announced. King Kong got a sayonara ceremony when the Mummy kicked him out; the shark should be afforded the same respect.

Which brings us to last Saturday’s unofficial old-school skipper reunion. It was assembled via Facebook by Tom Croom, who started as a Jaws skipper in 1994 and worked for the park until 2001. We met about 15 years ago while I was working for Universal’s entertainment department, and we bonded over a shared appreciation for the original Transformers cartoon. Today he’s an anime fan-convention producer and prolific blogger based in Vero Beach.

Croom’s plan to pop into the park with a few friends quickly spread into a gathering of more than 20 ex-skippers, including half a dozen from 1993’s original crew. Someone distributed customized “Jaws: The Final Voyage” lanyards as attendees reunited for the first time in a decade.

If Disney deep-sixed the Jungle Cruise, you can bet their marketeers would be all over a skipper farewell. Sadly, the only name tag-wearing employees I saw snapping pictures were from Universal’s VIP tours, whose Bret Hyler and Carla Young both served on the water. I’m glad one department at Universal still values institutional memory. Soon it was time to board a boat – we got one all to ourselves through the back door – for an ebullient final face-off, filled with more audience participation than a Rocky Horror screening. (Visit blogs.orlando weekly.com/culture2go for a link to the video.)

Soon you’ll have to fly all the way to Osaka (home of Universal Japan) just to see an Orlando original. After Jaws jumps for the last time, I fear E.T. will inevitably fly home. That would mark the obliteration of Universal Studios Florida as I knew it less than two decades ago.

Now if they’d only transplant the shark to menace the swan boats in Lake Eola.