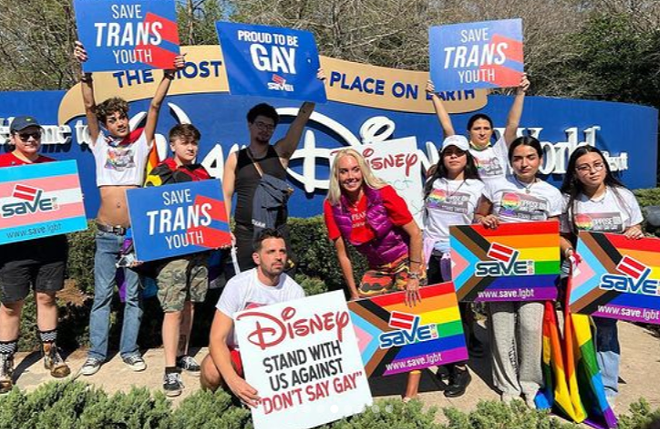 As Florida's controversial "Don't Say Gay" bill moves forward in the state's Senate, protests are breaking out everywhere from high schools to the House of Mouse. The LGBT rights advocacy organization SAVE held a protest in front of the Walt Disney World Resort on March 2 to pressure the company to speak out against the bill.

The bill making its way through the Florida legislature would bar primary school teachers from any discussion of gender identity or sexual orientation. Further amendments suggested by the bill's sponsor would force schools to out queer children to their families. Overall, the bill is part of a slate of Republican-backed legislation that would limit the subjects that could be talked about in Florida schools.

The protest at Disney comes after a story from the Hollywood Reporter detailing the ways in which current CEO Bob Chapek differs from his predecessor Bob Iger on political matters. Iger was frequently outspoken on cultural issues, while Chapek is much more measured.

"Whatever Bob’s personal politics are, he’s not an activist and does not bring any partisan agenda to work," an insider said. "He sees himself first and foremost as the custodian of a unifying brand that for nearly a century has been bringing people together, and he is determined that Disney remain a place where everyone is treated with dignity and respect."

Weigh that against Iger who publicly agreed with President Joe Biden that Florida's proposed bill was "hateful."

I'm with the President on this! If passed, this bill will put vulnerable, young LGBTQ people in jeopardy. https://t.co/fJZBzre4yM

Disney heir Abigail Disney also called on the company to speak out and use their considerable clout in Florida to harm the bill's prospects. She slammed the company for donating to every single sponsor and co-sponsor of the legislation.

“I could not be more unhappy with their political activities, both in terms of whom they fund and how they lobby,” she wrote on Twitter.

Take a look at some of the shots of the protest via SAVE below.