LET THERE BE RAGA

(Here are reviews of the four features in the 11th annual South Asian Film Festival, screening this weekend at Maitland's Enzian Theater.)

It's easy to scoff at the knee-jerk impulse to explain and/or classify all foreign films in Western terms … until you see a film like Bhavum, which doesn't just invite the tag line "an Indian A Streetcar Named Desire" but lobbies for it with impish insistence. What else would you call a story in which a happy couple's marriage is tested by the arrival of the wife's mysterious, formality-fixated sister (Mita Vasisht)? And what else would you think when sparks almost immediately begin to fly between her and the resentful husband, who's both suspicious of their visitor and secretly excited by her? First-time feature director Satish Menon even has leading man Murali Menon play a couple of scenes in a wifebeater, just to be sure we don't miss the correlation.

Bhavum ups its interest factor even further by grafting its Tennessee Williams swipes to a politicized story about globalization and privatization: Hubby Joy is a formerly crusading newspaperman whose hunger for the good life is gradually turning him into a shill for big industry, while wife Lata (the movie's Stella) displays her more idealistic bent by citing Enron in household arguments and teaching Crime and Punishment to a class of bored college students. The movie's juxtaposition of liberal philosophy and hand-me-down melodrama is more curious than efficient, showing that Menon has a way to go as a filmmaker. (His approach to shot composition and pacing, in addition, is profoundly inexpert.) But there's just something bold about the whole allusion-surfing enterprise that keeps you in its corner. 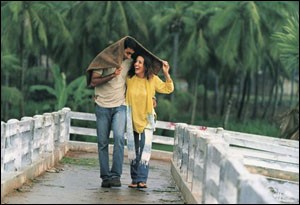 The collision of the modern and the traditional, the strained merging of Indian ways and Western ones, singing your way to bliss ... these are all themes visited often in mainstream Indian cinema. And they're central to the plot of Morning Raga. But what distinguishes Mahesh Dattani's (Mango Soufflé) second movie is the way it symbolizes another long-standing clash in Indian culture: that of "pop" cinema versus "art" cinema.

In India, the clamoring for vacuous, saccharine entertainment drowns out almost any attempt by filmmakers to create works that are driven by dialogue and plot, rather than by song-and-dance and cliché. Dattani bridges that gap by incorporating lots of accessible familiarity into a tightly written and intimate story about a retired singer's journey back from grief. The movie's musical milieu is awfully convenient, but what makes Morning Raga as easy to enjoy as a splashy Bollywood flick is its big-city/small-village, old-ways/new-ways, boy-meets-girl-as-fate-would-have-it story line – exactly the sort of simplistic frame that "pop" cinema audiences demand. The strong and accomplished presence of actress Shabana Azmi helps to elevate the middling performances of Perizaad Zorabian and Prakash Rao as director Dattani makes the movie's overwrought themes resonate with a renewed freshness. 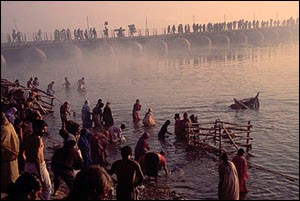 "No buy, just look." It's a familiar refrain to anyone who's run the sweetly aggressive gauntlet of touts that hawk jewelry and trinkets in India's shopping districts. The plea is temptingly noncommittal, deluding one into thinking that it's possible to freely sample the goods on display without the obligation of a transaction.

Watching Short Cut to Nirvana, a documentary about a massive spiritual gathering called Kumbh Mela, it's impossible not to think that some prayer-oriented version of "no buy, just look" was shouted on more than one occasion. A Mela of one kind or another takes place every year; the biggest, the Maha Kumbh Mela, occurs only once in every 144. The most recent, in 2001, lured 70 million (!) enlightenment-seekers to Allahabad, where three holy rivers (one of which is a mythical, non-physical river) converge. A Mela brings together all sorts of gurus and their disciples, as well as those who may still be spiritually browsing.

Short Cut to Nirvana shines a light on this massive yet surprisingly unknown pilgrimage. Filmmakers Nick Day and Maurizio Benazzo apparently started out to make a straightforward documentary, but they lock into a narrative pretty early. This helps to move the film forward once its extraordinary sights – like a sadhu who has held up his right arm for 20 years – begin to seem ordinary. Though the filmmakers are guilty of injecting predictable disconnects throughout the film – e.g., "India sure is a land of contrasts; look at that guru with a cell phone" – Short Cut is as entertaining as it is illuminating.

Set in the Pakistan of 1979, the movie (first screened for local audiences last February at DMAC) traces the effect of the country's rightward turn on Saleem (Aamir Malik), a previously apolitical mama's boy. Through a friend, he's gradually recruited into the humorless, woman-hating ranks of those who wish to see Pakistan become "a true Islamic nation."

The movie spends a good deal of time on this metamorphosis, yet still fails to find a more concrete reason for it than Saleem's lack of a father. Filmmaker Sumar is better at explaining the deep bone-chill the boy's growing militancy brings to his mother, Ayesha (Kirron Kher), who remembers the brutal crimes against women that accompanied the country's founding in 1947. Flashbacks illustrate her memories of those awful times, but their context goes largely unexplained until the movie's cunning conclusion. In the interim, Sumar pads her plodding narrative with a handful of incongruous musical numbers as the inconsistent cast tries to sell the package with acting that's only marginally convincing. Though Silent Waters improves as its plot threads converge, it's mostly useful as a stimulus to learn more about a pivotal region.