So Mitt's Mormon - what does that mean? 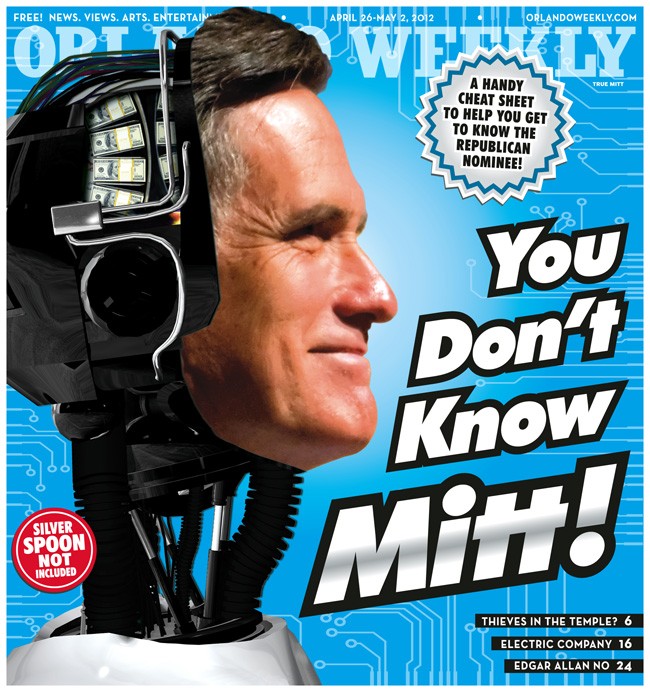 His robotic, out-of-touch demeanor, ridiculous personal finances and flip-flopping on issues aside, Romney's biggest challenge among some voters is his Mormon religion. According to a 2011 Gallup poll, 20 percent of Republicans say they'd be hesitant to support a Mormon in the 2012 election.

Are you one of the 20 percent hesitant about supporting a Mormon? Concerned about polygamy, weird undergarments or other Mormon stories you may have heard? Jeffrey Wright, a writer for our sister paper, San Antonio Current, researched the Mormon religion and the Church of Jesus Christ of Latter-day Saints and came up with the following handy FAQ.

Is the Book of Mormon the Latter-day Saints Bible?

The BoM was written by Joseph Smith, who claims to have translated it from a pile of gold tablets an angel hipped him to. In addition to the Bible and the BoM, Mormons rely on additional written scriptures, but also innumerable “revelations” that the church president, believed to be a living prophet, thinks up over his morning decaf. His edicts supersede previous scripture, making Mormon dogma fluid and often fickle.

Not the mainline LDS, though some breakaway sects still do. In the main church, however, polygamists are excommunicated. Salt Lake City apostles ended polygamy in 1890 after a “revelation” that serendipitously followed a federal move to seize the church and all of its assets because of the practice.

According to former President Spencer Kimball, married couples “are commanded” to have “proper sex.” But maybe he didn’t need to command this. The LDS manual entitled Just for Newlyweds reads: "[The clitoris] is one of the little organs . . . that God created in the female and that has no reproductive function whatsoever. It is there for one purpose only: to produce pleasure." Saucy!

Not magic. Not even secret. Just sacred. The two-piece garment, adorned with Masonic-inspired symbols, is issued as part of the “temple endowment” and must be worn day and night, removed only for bathing and P90X workouts. Exceptions are granted when outsiders might see these non-secret garments, such as at the beach or when LDS member Marie Osmond performed on Dancing With The Stars.

Mormons worship Jesus Christ, believe he is the son of God and consider Mormonism a Christian religion. However, a top-notch religion lawyer would shuffle through his briefcase and produce parchments noting that nearly 2,000 years ago Roman Emperor Constantine assembled extant representatives of an increasingly anarchic Christendom in order to lay down some constitutional rules. A major point of agreement was the notion of the Holy Trinity. And though the LDS recognize Jesus, God and the Ghost, they view them as distinct entities, not a mystical unity, failing the Holy Trinity test.

Was Jesus the only son of God?

Nope. In LDS scripture, Jesus and Lucifer were actually brothers in the “pre-mortal” world. When God sat them down to explain his plan of creating Earth to test human spirits under mortal conditions, Lucifer proved to be a rebel, and Jesus a daddy's boy. Result? Devil banished to the outer darkness for eternity; Jesus heads to terra firma.

Does the Smithsonian Institute employ the Book of Mormon as a guide for archaeological research for early history in the Americas?

No. This rumor among LDS adherents become so rife the Institute was ultimately compelled to issue a terse response declaring, “The Smithsonian Institution has never used the Book of Mormon in any way as a scientific guide . . . No reputable Egyptologist or other specialist on Old World archeology, and no expert on New World prehistory, has discovered or confirmed any relationship between archaeological remains in Mexico and archaeological remains in Egypt.” It then listed a number of erroneous BoM claims and textual anachronisms, such as the fact that iron, steel, glass, and silk did not exist in the Western Hemisphere before 1492.

Will Mormons baptize me after I’m dead, even if I totally have hydrophobia?

They might. Proxy baptism, as it is known, is carried out by baptizing a living person, who presumably doesn’t suffer hydrophobia, on the behalf of one who is dead. Hundreds of thousands of deceased unbelievers have been proxy baptized by Mormons, to the great chagrin of many of their survivors. The official LDS response of, “What’s the big deal? The soul can always reject the baptism in the afterlife,” has gained very little traction among incredulous opponents, so church authorities are now begrudgingly telling parishioners to ask permission of surviving family members first.

And after the proxy baptism?

Proxy baptisms, involving total submersion, are generally carried out by young baptized Mormons. Monday through Saturday in each LDS Temple, somewhat older RGMs who have been endowed and sealed perform proxy endowments and sealings. Small biographical cards for each deceased soul are used, and the worshippers either bring their own (the ones with permission of surviving family members), or they are provided cards by the Temple authorities from a vast database maintained by the church, which, coincidentally, owns ancestry.com.

Do Mormons really get their own planet in the afterlife?

Only Really Good Mormons who tithed and were “sealed” or married at some point. No planets for the unwed.

Where do Pretty Good Mormons go?

The second level of glory, the Terrestrial Kingdom.

So who goes to Hell?

Bad Mormons. It's called “Outer Darkness” rather than Hell, but make no mistake, it's eternal damnation. Oh, and Bad Mormons are joined there by the spirits that followed Satan even before they were born.

No. In the afterlife, unbelievers head to Spirit Prison, where they are received by missionaries and offered salvation. Learn some gospel, go through the temple stuff - and poof! - you're in paradise, and from there on move to one of the three levels of glory ... unless you end up in Spirit Prison and still reject Jesus Christ because you're just one of those incorrigible types that needs to be in a spiritual supermax situation. But even under that scenario, you serve 1,000 years before being transferred to the Telestial Kingdom, which is the lowest level of glory, but still so damn glorious that Joseph Smith said “man would crawl on his hands and knees just to get to there.”