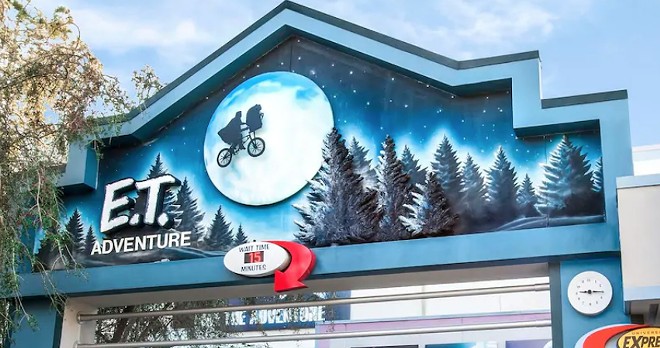 The complaint seeking more than $15,000 in damages was filed in Orange County court by Roberta Perez on behalf of her 11-year-old son Tiago Perez.

On Jan. 31, Tiago and his family were on the E.T. ride at Universal, which has "flying bikes" that allows riders to go on a "gentle ride through the sky," according to the theme park.

The Orlando Sentinel reports the boy's left foot got stuck after the ride between the E.T. Adventure vehicle and the offloading area, leading to a "bloody scene" and multiple broken bones. Tiago was "subjected to a violent force, which caused him to suffer serious and permanent injuries," the lawsuit says.

The Orlando Fire Department responded to the scene that day around 5:44 p.m. and provided "advance life support," according to records released by the city.

Photo via Universal Orlando
E.T. Adventure at Universal
"[Universal] knew of the dangers of the E.T. Adventure ride but failed to take appropriate steps to protect or warn the public of the dangers of said ride," the lawsuit states. "Prior to this incident, [Universal] had knowledge that the the design, manufacture, testing, construction, and/or operation of the E.T. Adventure ride created an unreasonably dangerous ride resulting in injuries to guests, but the Defendant continued to market the ride as safe to the unsuspecting public."

Orlando Weekly reached out to Universal Orlando for a comment but did not receive an immediate response.

The lawsuit also notes that although many tourist who visit Central Florida don't speak English, the E.T ride "[fails] to have appropriate warnings and ride instructions for non-English speaking guests."

The complaint adds that Tiago suffered permanent "bodily injury and resulting pain and suffering, disability, disfigurement, mental anguish, loss of capacity for the enjoyment of life," as well as medical expenses.