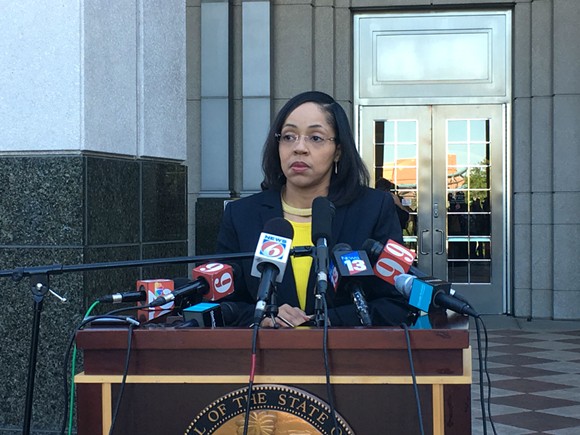 Photo by Monivette Cordeiro
A judge ruled against Orange-Osceola State Attorney Aramis Ayala in the case against murder suspect Markeith Loyd on Tuesday, allowing for the prosecutor appointed by Gov. Rick Scott to stay on the case.

Ayala was removed by Scott from the case after she announced she would not seek the death penalty for Loyd or any other cases during her administration. Loyd, 41, is accused of killing his pregnant ex-girlfriend Sade Dixon and fatally shooting Orlando Police Lt. Debra Clayton.

Ayala had asked Ninth Circuit Chief Judge Frederick Lauten to stay the proceedings for two weeks until she could challenge the governor's executive order that stripped her from the case in the Florida Supreme Court. Lauten denied Ayala's appeal, saying the governor's action is presumptively legal until a decision by a court finds that he exceeded his authority. For now, Ocala-based State Attorney Brad King will remain on the case, and he could add some assistant state attorneys from Ayala's office to help him.

"I respect you, personally, and I certainly respect your office," Lauten tells Ayala. "I acknowledge that this is unheard of. I'm not aware of anything like this before. But it's my responsibility to determine the orderly progress of this case."

Ayala would have to file a writ of quo warranto against Scott that would force him to prove his authority to remove her from the Loyd case.

"By inserting his personal politics into this case, Governor Scott’s unprecedented action is dangerous and could compromise the prosecution of Markeith Loyd and threatens the integrity of Florida’s judicial system," Ayala said in a statement after the hearing. "As the judge found today, what has been done is unheard of. We will move forward to expose the Governor’s action as unlawful and unconstitutional in a way that does not compromise the successful prosecution of Markeith Loyd."

King has not announced whether he will seek the death penalty for Loyd. For his part, Loyd made clear in court Tuesday that he wanted Ayala to stay on his case.

"This move is vindictive and politically motivated by Gov. Rick Scott," Loyd said.