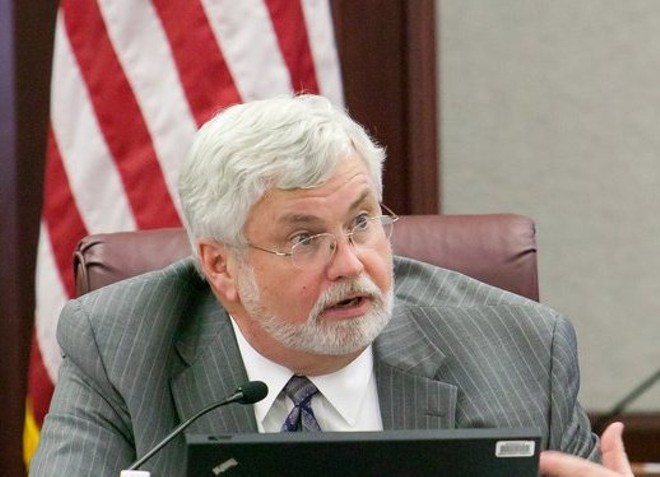 Photo via Jack Latvala/Facebook
Clearwater Republican Jack Latvala, the chairman of the influential Senate Appropriations Committee, may soon be in a gubernatorial fight with House Speaker Richard Corcoran.

Neither has formally jumped into the 2018 Republican primary for governor with Agriculture Commissioner Adam Putnam.

But Latvala, who has set an Aug. 16 date to announce if he will run for the governor's mansion, doesn't appear to be waiting.

Speaking Friday before about 75 people at the Rivertown Community Church in Blountstown, Latvala said lawmakers will need to revisit changes —- driven by Corcoran during the 2017 legislative session —- that have created fissures between the state's tourism-marketing agency and regional tourism groups.

And he charged that the changes were more about scoring political headlines than effective legislation.

“In the case of that bill, and the House of Representatives' efforts in the whole economic-development and tourism area, it was all about making political points, all about trying to make headlines, trying to raise your name identification, whatever,” Latvala said. “And what we've done is make a product that is going to be very hard to implement.”

Corcoran, however, said Friday the changes were about creating greater transparency.

Montford acknowledged that any meeting, particularly when more than one lawmaker is present, is political in nature. But Montford wanted Latvala to hear about the needs of rural communities that haven't enjoyed the prosperity that many of the state's larger counties and regions have experienced in recent years.

Education, transportation infrastructure, access to capital and economic growth were all tossed on the table, as well as recent news of the struggles at the state tourism-marketing agency Visit Florida.

Homer Hirt, a member of the RiverWay South Apalachicola Choctawhatchee, a regional tourism effort, said a financial-disclosure requirement in the new state law (SB 2-A) “is a sour point” for local tourism agencies.

“That is why you see some like (Experience) Kissimmee, Amelia Island (CVB), Franklin County (TDC) and Visit South Walton pulling back as partners,” Hirt said.

Under fire from Corcoran and other House leaders, Visit Florida this year had to fight to keep its state funding from being cut by two-thirds. The agency ultimately avoided major funding cuts. But with lawmakers approving new disclosure rules tied to the state funding, the agency has lost partnerships with at least 12 local organizations.

The law requires tourism boards participating in the “Targeted Marketing Assistance Program” to make public local operating budgets; travel and entertainment expenses; and the details of salaries and benefits of staff and board members tied to public and private funds.

Latvala's shot at Corcoran —- who also is widely expected to run for governor in 2018 —- wasn't his first of the day.

“This could bring jobs to FL but cuts in econ. dev. means we likely can't complete with AL or MS. Think about that,” Latvala tweeted.

On Friday, the two Japanese automakers formally announced they would buy 5 percent shares in each other's companies and jointly build a plant at an undesignated location in the U.S. where they would develop technology for electric and autonomous-driving vehicles and produce about 300,000 vehicles a year.

Corcoran and Latvala had different stances on a request by Gov. Rick Scott for $85 million in business incentives during the 2017 legislative session.

Latvala backed Scott's request for the money. But Corcoran called such incentives “corporate welfare” and even labeled them “de facto socialism.

Lawmakers eventually created the “Florida Job Growth Grant Fund,” with $85 million, during a special session. The money is slated to go to infrastructure and job-training programs to help entice businesses to Florida.

The job fund was praised by people who attended the Blountstown roundtable. They said some of the money should be set aside for rural counties so those areas can't be overlooked.

“The have-nots, as we've been called, need to develop that infrastructure and that training,” said Roy Baker of Opportunity Florida in Marianna. “We need to develop our sites and talents. Site location consultants that move employers to new locations throughout the United States tell us that talent comes first.”

Putnam will be in the Panhandle on Saturday, making an appearance at the annual Possum Festival Parade in Wausau in Washington County.