It's too damn hot in Florida 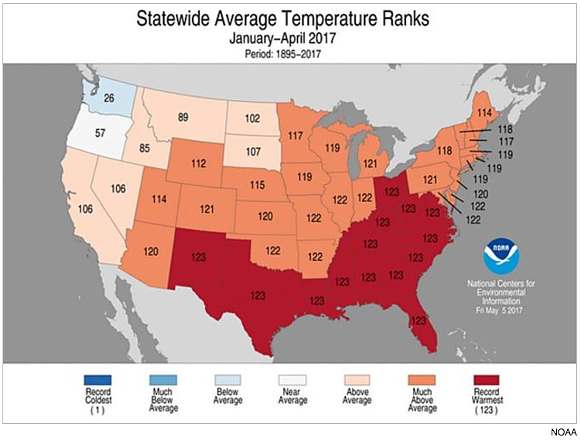 In the words of former Orlando native Rob Thomas, "Yeah, it's a hot one, like seven inches from the midday sun."

According to a recent climate report by the National Centers for Environmental Information, the state of Florida hasn't witnessed a hotter start to a year since 1895.

Florida’s average temperature for January through April was 66.6 degrees, which is the warmest it's been since we've been keeping track of this information.

Climatologists with NOAA say the February heat wave in Florida is what pushed our average temperature up. This jungle heat combined heat with little to no rain may explain why most of Florida caught on fire in April. At the moment, there are more than 100 active wildfires in Florida.

As you can see in the map above, Florida wasn't the only state with sweltering temps. Fourteen other states stretching from the southwest to the mid-Atlantic also reached their highest average temperatures.

None of this is normal. According to a study by Climate Central, by 2050 13 Florida cities, including Orlando, will see 100-plus days per year of heat-index conditions over 104 degrees.

In 2016, the entire planet witnessed its hottest year ever. So, if you're noticing a trend here, it's that in the very near future, it is going to be inhospitably hot Florida.

If only there were a scientific explanation for all this.