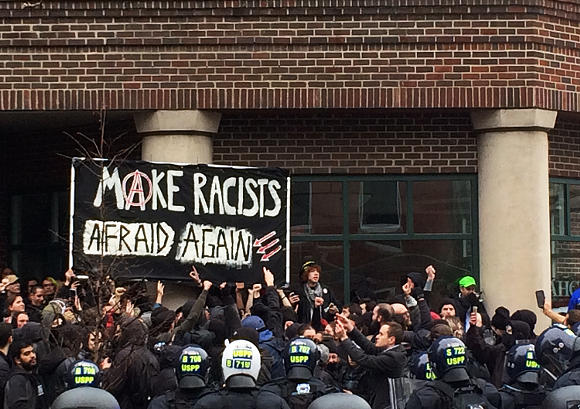 photo by James Bebert
The morning of Wednesday March 8, as women across America were striking for International Women’s Day, the struggles of 10 female felony defendants were obscured by D.C. courtroom walls, justice system bureaucracy, and public indifference.

The defendants, who are among more than 200 being prosecuted by the United States for public dissent on the day of Donald Trump’s inauguration, shifted uncomfortably in their seats waiting for the proceedings to begin. Dressed in courtroom formal attire, downplaying their asymmetrical haircuts, septum piercings and tattoos, the defendants waited silently as Judge Lynn Leibovitz began the arraignment hearings. 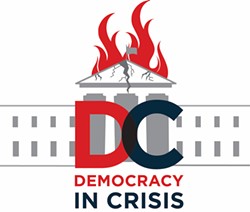 On the day of the inauguration, protesters from all over the country gathered at McPherson Square. Some activists formed blockades at inauguration checkpoints while others marched around downtown near the parade route. Eventually, after small groups of protesters using Black Bloc tactics broke the windows of banks, a Starbucks, and other outposts of multinational corporations, police confronted hundreds of protesters marching down K Street, cornered them at 12th and L, and arrested 235.

For the protesters who live in or near D.C., fighting felony charges is tedious, inconvenient and scary. But for the people who traveled from around the country to protest Trump’s presidency, this could rip their lives apart.

They’re all facing 10 years in prison and hefty fines for allegedly violating the district’s anti-rioting laws.

The 12th and L Defendants are getting help from the Dead City Legal Posse, a legal support collective in D.C.

“As a legal collective we're connecting folks with any sort of housing support they might need when they're here, travel funds, helping people travel from across the country or even close by when they need it,” said Rosie O'Brien of the Dead City Legal Posse. “We're also providing moral support. We're here to talk to them about what's happening. It can be traumatic for many.”

Many are facing online harassment from right-wing trolls, who are combing through videos and images attempting to identify anyone expressing solidarity with ANTIFA, the decentralized bands of black bloc leftist activists who were out in force on inauguration day.

“You can't simply round a bunch of people up because they happen to be in an area where some lawbreaking occurs, without identifying who did what,” said Legba Carrefour, another member of the Dead City Legal Posse. O'Brien and Carrefour arrived as the arraignments were concluding, carrying with them with a huge box of sprinkled donuts and bags of boxed coffee for the weary defendants inside.

The Dead City Legal Posse has been showing up for weeks now, offering comfort and support to other defendants as they are arraigned on the same charges.

The lawyers for all 10 defendants entered claims of not guilty and asserted that the constitutional rights of their clients were being violated. Only attorney Glenn F. Ivey mentioned the illegality of the police tactics, referencing the 2002 Pershing Park case in which hundreds of protesters were arrested en masse, just like at the inauguration. Chief of Police Peter Newsham, who managed the response to the J20 protests, was specifically cited in the 2002 case, which he also managed.

The form of mass arrest that took place in Pershing Park 15 years ago is known as “kettling.” Kettling is a controversial crowd-containment tactic involving the corralling and indiscriminate arrest of everyone in a given area. It is used for the sake of destabilizing large demonstrations.

This was “a precedent-setting case that stopped them from doing that (kettling) for the past 15 years,” Carrefour said later.

Other protesters from McPherson Square made their way to 12th and L in support of the kettled protesters. A barricade of frowning police kept the unwelcome newcomers to the sidewalk. They answered their solidarity with gas, pepper spray and rubber bullets, firing into crowds.

One by one those protesters in the kettle were pulled from their huddle, arrested and put in squad cars. The defendants spent hours going through this laborious arrest process.

The D.C. Office of Police Complaints released a press release on Feb. 27 stating, “OPC monitors did observe police activity that raised concerns on how the protests were handled, including MPD officers using force at times on some of the protesters, dispersing OC spray and stingers into the crowd without an order or warning and arresting individuals who were not involved in any rioting or acts of vandalism.”

The U.S. government is sifting through the large collection of video and photographic evidence, building a case on the 235 defendants, but most of them are not being charged on the basis of any personally identifying information.

Inside the courtroom, Judge Leibovitz denied one lawyer's Brady Order demanding the government hand over evidence relevant to the defendant's case. The defendants won't have access to evidence being used against them until their status hearings in the spring.

“If you read the indictment, there are things in there like, so for example, they use as evidence for participation in the riot, that some protesters were screaming 'Fuck Capitalism' or like, wearing black clothes, right? In solidarity with others. That's like clearly a first amendment issue right there,” said Carrefour.

Bill Miller, the communications director of the D.C. Attorney General's office, declined to comment at this time beyond the fact that those charges are filed, and that they typically don't comment on pending cases.

When the defendants finally exited the courthouse, O’Brien and Carrefour were standing outside with donuts and coffee, hoping to provide some sense of solace, however small.

“Eventually our goal is to turn the Dead City Legal Posse into a freestanding activist support, permanent legal support collective. Because we don't have one in D.C., and we think this is probably going to come up a lot more in the next four years,” Carrefour said.