If it continues unabated, Democrats’ fecklessness all but guarantees a 2010-style midterm wipeout 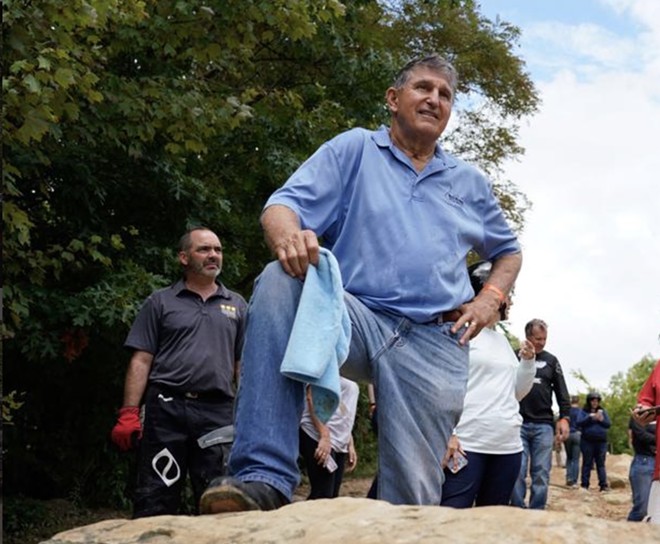 photo via manchin.senate.gov
Shakedown: Whether Biden can sway Manchin on the filibuster remains to be seen.

This long, miserable summer ends Tuesday, not a moment too soon for President Joe Biden. Not all of his problems have been his own doing — not entirely, at least.

Afghanistan’s collapse last month had been all but inevitable since the Trump administration signed the Doha Agreement in February 2020, effectively surrendering the country to the Taliban. Even so, scenes of the chaotic withdrawal — capped off by the military drone-murdering children — will haunt the administration for years to come.

The COVID-19 Delta variant spread unfettered largely because of Republican vaccine resistance, with GOP governors in Mississippi, Florida, Texas, Alabama, South Dakota and elsewhere granting the virus a license to kill — and in Florida, prohibiting local governments or private businesses from even trying to stop it. As the Delta variant flourished, the economic recovery slowed.

With his approval ratings battered, Biden’s domestic agenda is now imperiled by his own party’s timidity and deference to institutional anachronisms — its insistence on playing inside the procedural lines it has drawn — which gives cover to knee-jerk obstructionism and camera-seeking egoism.

Ultimately, everything comes back to the filibuster. Because Senate Democrats — most vocally, Sens. Joe Manchin and Kyrsten Sinema, though they’re not alone — have refused to eliminate or reform the 60-vote threshold for all non-budgetary legislation. That hands Sen. Mitch McConnell a veto.

Manchin and Sinema spent the spring negotiating down Biden’s $2 trillion infrastructure deal to $1.2 trillion, caving to Republican demands to excise key climate, mass transit and revenue provisions to get Republican votes. The infrastructure bill passed — a victory for comity — though the legislation doesn’t come close to addressing the country’s needs.

Midterms are referenda on the country’s direction, and they almost always favor the party out of power. If there’s a wave election, moderates get wiped out first.

Progressives were nonplussed. In the House, they say they’ll only support the infrastructure bill if it’s paired with Biden’s 10-year budget plan, which spends $3.5 trillion on climate and social programs. As a reconciliation bill, it can circumvent the filibuster and pass the Senate with only Democrats. But it needs all 50 of them. And it needs House Democrats, with their slim majority, to stick together, too.

Sinema, a leading beneficiary of Big Pharma’s largesse, has told the White House she won’t support a proposal that allows the government to negotiate Medicare prescription-drug prices, which the reconciliation bill counts on for $700 billion in savings. Manchin says the $3.5 trillion price tag is $2 trillion too high; he wants to gut the child tax credit. And after earning $500,000 in stock dividends from a coal brokerage firm last year — and reaping more fossil fuel contributions than anyone else in the Senate — he’ll also water down the budget’s initiatives to combat climate change.

If it continues unabated, this Keystone Kops routine all but guarantees a 2010-style wipeout.

In the shorter term, it could also lead to a government shutdown and crash the global economy. Just as in 2011, McConnell has threatened not to extend the federal government’s borrowing limit. Unlike in 2011, when Republicans used the debt ceiling to force President Obama to make drastic spending cuts, McConnell doesn’t have an agenda beyond political calculation. Debt-ceiling votes are unpopular; he wants the other guys to take them.

“The country must never default,” he told politics newsletter The Punchbowl last week. “The debt ceiling will need to be raised. But who does that depends on who the American people elect.”

Democrats have attached the debt ceiling to a spending bill to keep the government open beyond Sept. 30. That will require 60 votes. If McConnell holds his line, the bill will fail, the government will close and global markets will enter a tailspin. Democrats either have to call McConnell’s bluff — and hope he’s bluffing — or attach the debt ceiling to the already-wobbly reconciliation bill.

Again, their options wouldn’t be so constrained if they simply did away with the filibuster. The debt ceiling wouldn’t be a problem. Neither would the opinion of the Senate parliamentarian. Senate Dems would still have to placate Sinema and Manchin, but they wouldn’t have to cram all of their priorities into one messy reconciliation bill.

Earlier this month, Rolling Stone reported that Biden told Democratic leaders he’ll pressure moderates to carve out an exception to the filibuster for voting-rights legislation. Whether he’ll sway Manchin and Sinema remains to be seen. (I’m skeptical.) Broader filibuster reform seems about as likely as the diet pills advertised in your Facebook feed actually working.

Democratic moderates have convinced themselves that they’re doing themselves and the party a favor by gumming up the works, hoping that immunizes them to next year’s attack ads about runaway spending. It won’t. And it wouldn’t matter if it did.

That’s not how midterms work. They’re referenda on the country’s direction, and they almost always favor the party out of power. If there’s a wave election, moderates get wiped out first. Their chances are almost wholly tied to Biden’s popularity, and Biden’s popularity is in no small part tied to getting both the infrastructure and reconciliation bills through Congress.

The Democrats’ circular firing squad isn’t going to take out Alexandria Ocasio-Cortez. But it has many of the moderates who are snatching defeat from the jaws of victory dead in its sights.