How to pretend to be good at poker 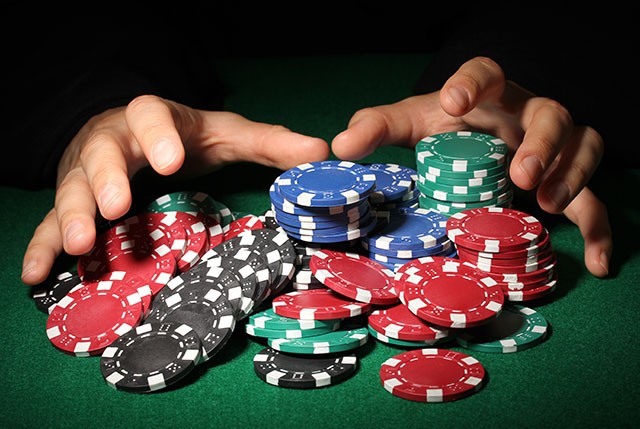 When Chris Moneymaker, a nobody from Tennessee, took first place and $2.5 million in the 2003 World Series of Poker main event, every Tom, Dick, Harry, Larry and Mary believed he or she had what it took to be a hot-shot poker player. Fortunately, there’s no shortage of material available if you decide you’d like to study the game and work on your poker skills – yes, skills. But who has that kind of time?

Since bluffing is an essential part of the game itself, here are some things you can do to bluff people at the table into believing you’re not a totally clueless noob:

Talk the talk. You know how street Spanish sounds nothing like the Spanish you learned in school? Well, the card room also has a language all its own. Words like “cooler,” “ship it,” “river,” “fourth street,” “burn” and so on mean completely different things at the felt. Learn this ahead of time so you don’t sound like a fool. You wouldn’t visit a foreign country without learning at least the important phrases in that country’s language, would you? “Donde está el baño?” Wikipedia has a great glossary of poker terms to get you started.

Clothes make the man (or woman – yes, women play poker, too. Weird, right?). In life, just looking like you know what you’re doing can go a long way, which is why most people – especially those who spend nights downtown stumbling out of high heels and puking down T-shirts – have at least one nice outfit to wear to job interviews. The same holds true for poker. It’s no coincidence all the guys you see on TV wear baseball caps, sunglasses, hoodies and earbuds. They’re dressing for success! And you should be, too.

Know a thing or two about actual poker players. Most people at the table don’t want to be your friend. They want your money. But sometimes people will open up, and initial small talk often revolves around poker, because it’s clearly something you share an interest in – I mean, look at you … in your Affliction shirt and Ray-Ban sunglasses. They might mention people like Sam Farha, Daniel Negreanu, Doyle Brunson, Phil Ivey, Phil Hellmuth and Phil Laak, so it’s in your best interest to do a bit of research on the majors. Think of it this way: If you were at a concert and someone said, “This song reminds me of the Beatles,” the last thing you’d want to ask is, “Who?”

I hope this advice serves you well as you set out to stake your claim at the card table. And, please, email me ahead of time to let me know when and where you’ll be playing. You know, so I can see you succeed in person.

Larry Fulford is a local comedian. You can catch his stand-up show, "Good at Bad Decisions: End of the World Holiday Party and Countdown to Extinction," on Friday, Dec. 27 at Will's Pub.