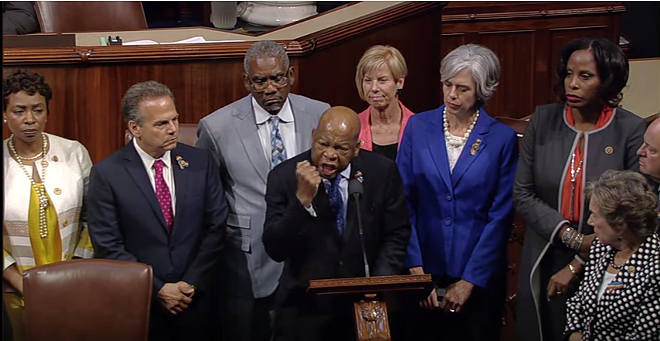 Screencap via U.S. Rep. John Lewis' YouTube page
Demanding a vote on gun legislation, U.S. House Democrats are staging a sit-in on the chamber floor, chanting "No bill, no break!"

You watch the sit-in live on C-SPAN here. USA Today reports U.S. Rep. John Lewis of Georgia staged the impromptu sit-in hours ago and haven't given back control to the Republicans. The demonstration is in response to mass shootings in America, including the tragedy at the gay nightclub Pulse in Orlando where 49 people were killed and 53 wounded on June 12.

"Where is our courage?" Lewis says, according to the newspaper. "Those who pursue common-sense improvement are beaten down. Reason is is put aside...What is the tipping point? Are we blind. Can we see?...Give us a vote! We came here to do our job!"


Joining with @repjohnlewis and dozens of my colleagues for House sit-in for a vote to prevent gun violence. No more silence. This House needs to act. Anything short of a vote is heartless and cowardly. #NoBillNoBreak


C-SPAN is broadcasting the sit-in using live videos from social media. The regular cameras they use, which belong to the House, are not being used because the chamber is in recess. House Democrats accused Republicans of not wanting to show their sit-in, but USA Today reports it is policy not to broadcast recesses.