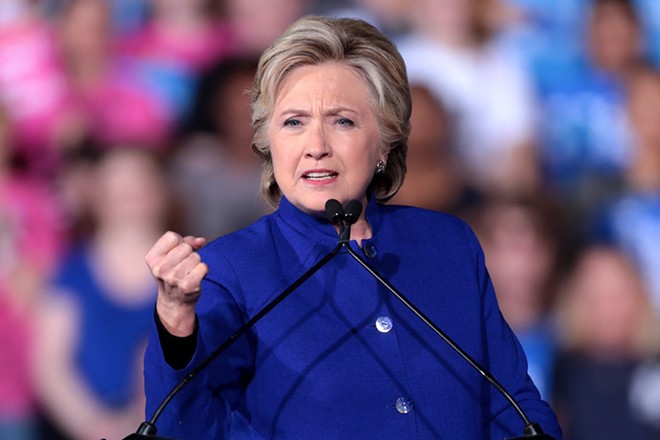 Photo by Gage Skidmore/Flickr
This week, the Florida Supreme Court ruled that former felons who’ve completed their sentences should still have to pay off all “legal financial obligations” before they can set foot in a voting booth, and, of course, Republican governor Ron DeSantis was in fact “pleased.”

Following the court’s Thursday advisory opinion on the GOP-backed SB 7066, the governor took to Twitter to express his joy while Democracy took another shot in the jeans.

“I am pleased that @FLCourts confirms that Amendment 4 requires fines, fees & restitution be paid to victims before their voting rights may be restored,” tweeted DeSantis. “Voting is a privilege that should not be taken lightly, and I am obligated to faithfully implement Amendment 4 as it is defined.”

Well, not everyone was “pleased,” which was very evident in the governor’s Twitter mentions—notably, former Secretary of State and Democratic presidential nominee Hillary Clinton, who had to remind DeSantis that voting is a basic human right and not something reserved for old white male landowners.

“Voting isn’t a privilege. It's a right,” said Clinton in a tweet on Friday afternoon. “And requiring voters to pay off fines and fees to exercise that right is a modern-day poll tax.”


Voting isn't a privilege. It's a right. And requiring voters to pay off fines and fees to exercise that right is a modern-day poll tax. https://t.co/ySUMJDhiAC

“Most of us really aren’t pleased by this, especially the millions of folks who still can’t vote & those who voted for Amendment 4 in the first place,” tweeted Eskamani. “Let those who have served their time vote— it makes Democracy better for all of us.”

In many ways, it’s hard to argue that forcing people to pay money so they can have the "privilege" to vote is not a “poll tax '' because, well, that’s the definition of a poll tax, and it's undeniable that SB7066 will in fact keep hundreds of thousands of minorities in Florida from voting.

One estimate found that nearly half a million Florida residents will be affected by these burdensome financial obligations, and, as the Tampa Bay Times and Miami Herald reported, low income black voters will be disproportionately impacted.

Plus, for many felons, paying back these fees could literally take decades that they don’t have, leaving them permanently disenfranchised. WLRN reported that more than “$1 billion in felony fines were issued between 2013 and 2018.” To make matters worse, these same court fees are often sent to third party debt collectors, which then add absurdly large interest rates.

While this is a giant setback for Florida voters, which overwhelming passed Amendment 4 in 2018 with 65% of the votes, the federal case is still pending before the 11th Circuit Court of Appeals and an oral argument is scheduled for January 28. Both the NAACP and the ACLU acknowledged this point in a joint statement following this week’s ruling.

“This advisory opinion does not impact our ongoing federal litigation to secure the voting rights of hundreds of thousands of returning citizens. The state court was not asked to, and did not, determine when all terms of sentence are ‘complete,”’ said the statement. “The Florida Legislature cannot ignore U.S. constitutional protections when interpreting when a sentence is completed for the purpose of restoring voting rights. If it does, we are confident the federal courts will correct it. The court’s ruling also continues to leave plenty of room for the Florida Legislature to correct SB7066 and allow people who are unable to pay their obligations to vote.”