We went to the RNC in Tampa and all we got was this lousy story to tell; the Sentinel's premature ejaculation over Mitt Romney's acceptance speech

So, dear readers, what was your favorite part of the Republican National Convention? (Besides Clint Eastwood's performance art, of course, which was either the first sign of Dirty Harry's senility or the best punking in the history of American politics.) Paul Ryan's astoundingly fact-free oratory? That time Mike Huckabee accused Barack Obama of being pro-infanticide? Ann Romney's rich-lady condescension? Mitt Romney's excursion in passionless nothings?

If you ask us – and you just did, right? – our answer would be none of these. No, our best moment of the RNC in Tampa happened on Monday, before the festivities commenced, when your favorite column damn near shocked the political universe by (almost) winning Washington Post columnist Chris Cillizza's Politics & Pints quiz event, only half of which was actually politics.

By the end of the fourth round, thanks to our trusty iPhone (everyone else was cheating, too, you guys) we were in first place! As in, ahead of Team NBC (suck it, Chuck Todd) and the guys from the Daily Telegraph in London, because we know stuff like the name of the teenage vixen in Lolita (Dolores) and the last time Wisconsin voted for a Republican in a presidential election (1984). But then, the iPhone died. And more importantly – because we were only cheating a little, cross our hearts – we had to name second- and third-tier presidential candidates from years past (have you ever heard of Lee L. Mercer Jr.?) based on a photo lineup of high school yearbook-style mug shots. The goddamn Brits proved good at that. So did Chuck Todd. We did not and plummeted to fourth place.

This is the kind of Important Journalism™ your humble scribes set off to engage in – not the pomp and circumstance of the convention itself, because we could watch that on TV without being surrounded by so many smug assholes, but the ancillary parties and strange events that always surround political mega-events. For the handful of you who didn't follow our madcap adventures on Bloggytown, here's a quickie recap:

We rolled into town on Monday evening, and after settling in and liquoring up, made our way first to the aforementioned Politics & Pints and then, more importantly, to Nuestra Noche, the big-shit event of the night featuring Jeb and Marco Rubio, designed to show the world that the GOP is really, truly down with the browns. So we cabbed our way over to Ybor City, only to find, um, a line of dilapidated ball gowns and sweaty suits circling the block. It was an overcrowded clusterfuck of epic proportions. Oh, and Jeb never showed.

We ended up down the street at the New World Brewery, where a giant blow-up Romney was debating a homeless-looking man prattling on about dental care. Swear to God.

Night two found us at the Wonkette Drinky Thing, where we and maybe a dozen devotees of Rebecca Schoenkopf's blog gathered on the patio of a place called MacDinton's, which otherwise was occupied by shirtless joggers and beer bongers, to eat, drink, talk about politics, drink, yell at RNC speakers on the television, yell at each other about which one of them was the most horrible person, drink, prepare ourselves for the forthcoming Taliban apocalypse, drink, etc. And then we moved on to HomoCon, where Republicans plied a few hundred

LGBTs (and friendlies) with free booze in an effort to convince them that despite the whole marriage/civil rights/DADT/Rick Santorum thing, they should be friends. The event's programming consisted of GOProud Executive Director Jimmy LaSalvia making a five-minute, half-hearted sales pitch for Romney-Ryan. Here's the thrust: Yeah, the Republicans hate us, but "before you can get married, you need a date, and everyone knows you can't get a date without a job."

That was it. And so, with real work to do, we departed the next morning with a hangover that would last for days and the sinking feeling that comes with watching democracy die. Like we said, Important Journalism.

Speaking of journalism, the Orlando Sentinel sure dug the hell out of Mitt Romney's acceptance speech. So much so, in fact, that even before Romney made his speech – which we thought was kinda meh, but whatever – the Sentinel's website declared that Mittens "spoke eloquently," and the crowd "loved it."

Huh. We didn't know they were psychic. Makes you wonder why they couldn't see Sam Zell coming. Zing!

Journalism blog JimRomenesko.com picked up the scoop and got an explanation from Audience Engagement Editor (real title!) Mike Lafferty, who explained, "The text was written Thursday evening in anticipation of the speech's outcome" as part of a Sentinel online poll, and was published prematurely. "Had the speech gone awry," he added, "or had it been poorly received by the crowd, the text would have been changed last night to reflect that."

That would make more sense if the Sentinel hadn't preternaturally decided that Romney – who can barely get two words out of his mouth without inserting his foot – was "eloquent," and that the Republican base, which has spent the last year so reluctantly resigned to Romney that it seriously flirted with Santorum, Newt Gingrich and Herman Cain, "loved it." 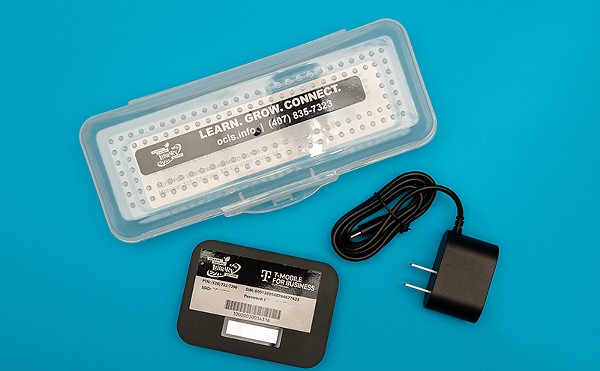