The county accidentally sends Mayor Teresa Jacobs' private texts to a 'Sentinel' reporter, then gets mad at the reporter for reporting on them 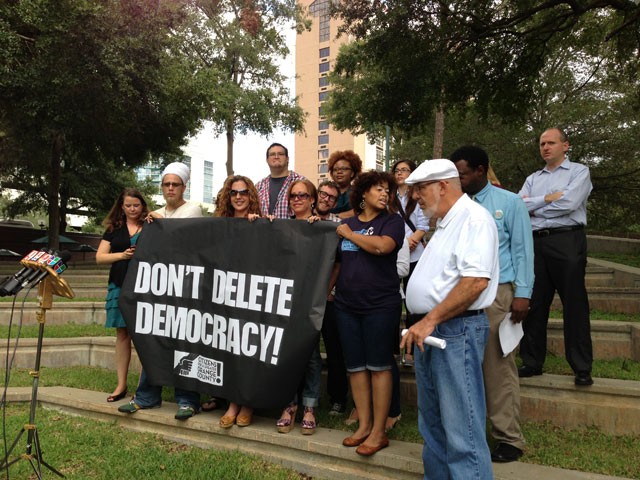 Nothing personal!: Citizens for a Greater Orange County continue to prove that said county is only getting worse

Like most slapstick hijinks that are the hallmark of situation comedies, the bad acting and behind-the-scenes quibbling seem to be getting the better of the initially promising offering, The Decline and Fall of the Orange County Empire. In case you haven't been following the LOLTEXTGATE saga – you know, the one where a citizen-led initiative to codify paid sick time for employees in the county rule books, which was met with so many county commission texty-fingers that it's impossible to keep up with who is really losing this battle anymore – the issue remains a hot button (or touchscreen) among those with even the slightest concern for how their local government is operating. The answer to that municipal conundrum, in no uncertain terms, is that it is not operating, unless you consider the overtly suggestive guiding winds of lobbying interests like Disney and Darden to be on par with electorate-sensitive self-determination.

On Friday, the folks of Citizens for a Greater Orange County took the narrative one step further into oblivion by filing a third lawsuit (if you count the one that had to be re-filed) against the county. The latest complaint is fairly simple: Orange County has been remiss in coming forward with public records that the plaintiffs requested (basically, all text messages and emails on the issue of earned sick time that were flying to and from commissioner email boxes and handheld devices during the Sept. 11 six-hour county commission meeting bonanza), so the county is in violation of the state's "broad" Government in the Sunshine laws. As an added caveat, Citizens for a Greater Orange County pressed noses harder to the grindstone this time by including the fact that these electric-dream discussions proven to have been going on between sitting commissioners, County Attorney Jeff Newton and sundry chamber interests during the meeting were a sort of secret conference within a conference, meaning that the county may also be guilty of violating Florida's open public meeting laws. The complaint concludes that any and all business decided during that meeting is null and void, including the decision to "ride out the clock" and bump the sick leave measure off the November ballot. (When we asked the group's attorney, State Rep. Scott Randolph, D-Orlando, about what that really means at the Friday lawsuit press conference, he said that it was mostly a procedural thing in the "bigger picture of litigation" on the Sunshine laws, adding that it would effectively allow citizens to "see behind the curtains" of their county-in-crisis cabal). So, nothing happened, then.

Except so much has happened. At last count, commissioners Jennifer Thompson, Scott Boyd, Fred Brummer and now John Martinez have all fessed up (under duress) to LOLTEXTING with lobbyists, though, of course, the messages have since been deleted. A new batch of records released on Oct. 8 shows even Commissioner Ted Edwards agreeing with Orange County Republican leader Lew Oliver's Sept. 11 texted summation that, though the mayor wouldn't say it publicly, she would be happy to have the whole thing delayed beyond the Sept. 18 meeting, thus keeping it off the ballot. "This is TERRIBLY important," fingered Oliver. "Just don't fall for the tempting bait of passing the thing today 'as is' based on the expectation that the court will then surely kill it altogether as defective. We can't risk the court approving it." ("Agrees [sic]," Edwards responded). Who is this "we" Oliver speaks of? Welcome to the board, Lew.

Mayor Teresa Jacobs (and her band of county tech-minions) "accidentally" released two years' worth of texts from her personal cell phone to several media outlets, including the Sentinel, which wrote a story about them. That infuriated an inconsolable Jacobs, who demanded a retraction. The Sentinel then forced its county-beat reporter, David Damron, to pen a painful mea culpa for a couple of errors in the story (clarifying who sent what and who received what) in the interest of the paper maintaining a "relationship" with the county. Let's get this straight: Damron's the villain, and the county – with its wayward message releasing, inexcusable co-conspiring and flat-out lying – gets a pass? Come on, Sentinel.

What appears to be happening now is a new riding out of the clock: The assumption that, by dragging its feet on public records and throwing up strawman arguments, the county will survive this lashing without so much as a scratch. (That is, unless you plan on voting in 2014 when a bevvy of them will be at the other end of your ballot pen.) Still, maybe if it all gets too confusing, nobody will pay attention anymore. The show will be canceled! If only the chamber could shut up.

On Monday, Orlando's own Joe Kefauver – a managing partner at Parquet Public Affairs – penned a treatise for the choir in the Chamber of Commerce's Every Monday email blast (the same nonsense was published in the Sentinel on Friday). Titled "Sick-Leave Initiative is National Effort," the piece does what every sick-time opponent has tried to do since the advent of the initiative over the summer: Pin the push for sick time on dastardly national interests who are supposedly funding the local, grassroots campaign. Never mind that hundreds of local people sweated through sun and storms to gather more than 50,000 signatures – big unions are backing this labor nightmare on Main Street, he insists (even though labor unions have only contributed $2,000 to the local effort, according to Organize Now executive director Stephanie Porta).

"The push to mandate these added costs is part of a coordinated national strategy to impose union and their worker-center allies' agendas on communities across the nation," Kefauver writes – ignoring his own coordinated lobbying strategies – before dismounting with the following salvo: "For when labor leaders move on to the next target in their last-ditch plan for survival, it will be our economy and people who will be left to pay the price."

You know who's really paying the price, though, don't you Joe? Just check the Oct. 8 story from the Sentinel outlining Darden Restaurants' plan to keep most of its employees working under 30 hours – therefore, no insurance! – in a sort of cruel protest of the impending doom of Obamacare's insurance requirements. Then pop over to Darden's ledgers to see the 4 percent profit increase the company's suits enjoyed when first-quarter figures were released in September. That $110.8 million sure doesn't help the chambercrats (meaning, at this point, the county, too) look much like victims.

"War, in its fairest form, implies a perpetual violation of humanity and justice," wrote Edward Gibbon in The Decline and Fall of the Roman Empire. Bring on the decline, Orange County. It's fall! And this show isn't funny anymore.