Central Florida's most notorious case of racial violence is getting another retelling, whether residents want it or not.

"All the old-timers in Lake County, they don't pass the story along to young people," says Gary Corsair, a journalist from The Villages. "I think there is a collective shame."

The story, detailed in Corsair's book The Groveland Four: The Sad Saga of a Legal Lynching, is indeed something to be ashamed of. When four black men were accused of raping a 17-year-old white girl in 1949, a mob roamed the town's black section terrorizing residents, setting fire to three houses and forcing 400 people to flee their homes. It took the National Guard to restore order, but not before a posse shot and killed one of the suspects; the three others were arrested, tried and convicted on what was later shown by a St. Petersburg Times reporter to be flimsy evidence in a sham trial.

The U.S. Supreme Court ordered a new trial based on the Times' story. But the day before the trial began, two of the men were shot by Lake County Sheriff Willis McCall himself. McCall claimed the two – both of whom were handcuffed – had jumped him. One of the two died, the other survived three bullet wounds and went on to accuse McCall of murder.

Corsair, publisher of The Villages magazine, has been obsessed by the story since coming across it four years while researching a piece about hurricanes. There have been two other books written about The Groveland Four, as well as a documentary film by a UCF student named Robert Thompson. But Corsair says he's the only author to have interviewed Charles Greenlee, the only one of The Groveland Four still alive. "He answered all my questions," says Corsair. "I believe he is innocent."

He also found the alleged rape victim, who still lives in the area. She wouldn't talk. "She certainly wasn't very credible back in '49," he says. "And I don't know that she is today."

Speaking of civil rights, perhaps you noted the recent story about the FBI having compiled thousands of pages of documents on "activist" groups like the ACLU and Greenpeace, both of which happen to be critical of the Bush administration? The FBI isn't illegally gathering information on groups that legally protest the president's policies or anything, according to them. What exactly they are up to will be revealed when the ACLU gets the (heavily redacted, no doubt) files they requested under the Freedom of Information Act.

Yes, the national ACLU has a spine. And it appears Florida's Central Chapter may be growing one too. It's under new management, and the new leader is pointed in his criticism of the group's activities of late; in fact, he called it a "debating society." 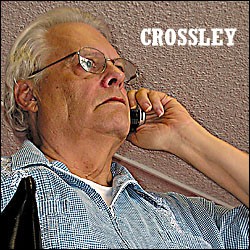 But no more. "Our chapter is going to be at the forefront," says George Crossley. "We are not going to sit on our butts and do nothing."

If the name sounds familiar, it should. Crossley, 64, is the former televangelist who went to prison for more than three years for trying to hire a hit man to kill his lover's husband. Now he's in charge of the ACLU. If that sounds wrong to you, Crossley doesn't give a rip.

"I'm not doing this to win a popularity contest," he says. "I couldn't care less. I don't have time to play games."

He will focus the chapter's efforts on challenging the constitutionality of stringent sexual predator ordinances, the USA PATRIOT Act, and restoring voting rights for ex-felons. "Of course, I have a personal stake in that," he says.

Salvo returned! A month ago, the Fraternal Order of Police Lodge 25, which represents the Orlando Police Department, sent Mayor Buddy Dyer a letter asking that hizzoner abide by whatever the special magistrate decides in the cops' ongoing labor dispute with the city. Dyer said thanks, but no thanks.

But the mayor's refusal didn't stop him from demanding the same from FOP chairman Sam Hoffman minutes after the special magistrate released his recommendations July 12, which sided with the city on the crucial issue of pay raises. "Based on the FOP's letter dated June 16 … we anticipate that the Fraternal Order of Police will agree to resolve the current contract dispute by accepting these recommendations," city negotiator Lee Brown said in a press blast sent out by city spokeswoman Brie Turek.

If Dyer had agreed to the FOP's demands a month ago, this would all be over. But since he can't retroactively agree, the ball is in the union's court. Will they agree to a 2 percent pay raise, or force a public hearing that may well prove nasty? Hoffman says his members are leaning toward the latter.

The city also managed to pull a fast one on the Orlando Sentinel. Turek's press release states, "The report also stated that the union's attempt to show that 'the city has "hidden" millions of dollars in various reserve funds that could be used to fund FOP wage demands is simply not supported by the evidence.'" The Sentinel picked up that quote in its story that ran July 13. Only that wasn't exactly the magistrate's position; that was the city's lawyer's position. When that sentence appeared in the report, it was clearly in the context of the magistrate reciting the city's position – a fact which the Sentinel missed.

In fact, on Page 3 of the 38-page report, Special Magistrate Stanley Sergent writes, "It is important to note that although the availability of funds was evidently a frequent topic of discussion during negotiations, the parties stipulated at the impasse hearing that the city's ability to pay was not an issue to be considered by the special magistrate."

To be fair, the Sentinel did print a correction.

And now we do the same, kinda: Last week's Happytown™ reported that, in reference to an item describing Mayor Buddy Dyer's financial relationship with his former law firm, "Dyer says he's doing nothing wrong." As best we can tell, since we don't have access to his bank records, this is true.

Dyer spokeswoman Brie Turek reminded us that we had spoken to her, not to the mayor. So the sentence should have read, "Dyer's office says he's doing nothing wrong." We regret the error and would like to clarify that the mayor himself hasn't denied wrongdoing. To us.

By the way, the "mayor's office" is thrilled that Weekly readers voted him best politician, and slightly less so with Billy Manes' "Best Neck Fat" award.