No, you can't get Air America on the air in Orlando (though you can listen to it on the Internet). But if it's local progressive talk you desire, you're in luck, because RadioActive is back on the air – at least for the time being.

RadioActive was a pay-for-play show on WORL-AM (660) that debuted about two years ago. Back then, hosts Steven Smith and June Vasilis provided a much-needed outlet for people who'd rather rip their thumbnails off with pliers than listen to Bud Hedinger. RadioActive was supposed to be a mix of Howard Stern and NPR, except it never achieved the audience appeal of either. No matter, though; as long as Smith kept paying the $200 a week for airtime, the show was golden.

But then the station switched to an all-sports format, and Smith lost his spot. Radio formats being fluid, however, the station soon switched again to a news/business/talk format, and Smith was offered his spot back, at a reduced rate ($100 an hour). It turns out that WORL has been acquired by Salem Communications, the country's largest radio purveyor of religious broadcasting. So in the first quarter of next year Orlando gets (yet another) conservative broadcast outlet. In the meantime RadioActive gets to stay on the air.

"We're going to do the best we can for a couple months," says Smith. Listen for the show Sundays at 7 p.m. And since the airtime is cheap, Smith will also be helming the titillatingly titled The Other Talk Show, a weekly hour devoted to the paranormal. Listen for that one at 6 p.m. Saturdays, also on WORL. And look for that one to get cancelled too when the conservatives move in.

The MBI also insisted it wasn't threatening legal prosecution when its agents told an Original Bookstore clerk to contact the store's lawyer. Rather, the agency was embarking on "an effort to share with purveyors of this genre of videos legal events which occurred in the Ninth Judicial Circuit in recent years." See, they're just trying to help the smut peddlers out. Such nice young men.

It's time once again for a Happytown™ Fact Check™, a free service brought to you by the editors and writers of this wildly popular column, who want you to Stay Informed, Stay in Charge™.

Fact (as proffered by those flaming liberals at MoveOn.org): U.S. Rep. Ric Keller took $20,000 in campaign contributions from a political action committee run by Tom DeLay, who is the former House Majority Whip and an indicted Republican scumbag! DeLay broke campaign contribution laws funding the PAC, and he also gave money to Keller! Guilt by association!

Reality: Uh, hold on a minute. We have nary a doubt that DeLay is a scumbag, and that this country would be better off if he was sent back to his former vocation, killing bugs in Houston. But is our Rickey-boy so tarnished? Is he part of that oft-mentioned "culture of corruption" roiling the GOP?

"Well, there's nothing to return," says Keller chief of staff Bryan Malenius. He says the last donation Keller got from ARMPAC, the PAC in question, came in 2001, and that money's long gone. Plus, notes Malenius, the shenanigans that got DeLay in trouble stem from TRMPAC – Texans for a Republican Majority – from which Keller received nothing.

Allegation or not, pundits are postulating that DeLay's alleged law-breaking, along with the investigation into Sen. Bill Frist's clairvoyance on the stock market, may sully Republican candidates. Malenius thinks otherwise. (Of course, it's his job to think otherwise.) "Voters in Central Florida will make their decision in next year's congressional election based on Ric Keller's record, not Tom DeLay's. Ric has a great track record in Congress that's in step with the voters of Central Florida and we look forward to talking more about it during next year's election." Stay tuned.

Marla Weech made an unexpected exit from Action 27 news last week, sailing out on a river of crocodile tears shed by folks who had done her dirt lo these past few years. In a "farewell" article in the Orlando Sentinel, Hal Boedeker couldn't resist citing Marla's poor showing in a reader poll the paper conducted August 2002, when she was still on Channel 9. (A typical reader: "She alone has dragged the station down … .") What Boedeker didn't mention last week: He himself masterminded and conducted the "unscientific" (his word) poll, which purported to reveal that viewers wanted Weech replaced, but which in fact reflected the opinions of people who read his column.

Now, years later, he gets to say that his paper merely anticipated her downfall, rather than helping bring it on. Talk about a fait accompli. (That's French for "hatchet job.")

SEMI-REGULAR FEATURE
DIARY OF A LYNX RIDER
By Steve Fahrholz 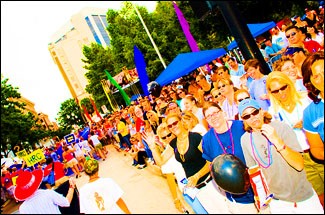 It's been a few weeks since George W. Bush suggested we not drive so much. Seeing as how we love our president, apple pie and Jesus, and we despise those oil-grubbing, freedom-hating ragheads, I expected I-4 to be clear of Hummers and Expeditions. Mass transit was now a patriotic duty, and I figured Central Floridians would be proud to park their SUVs and join me on the LYNX.

But the LYNX crowd is the same as always. No spiffy-dressing Maitlanders or denizens of Park Avenue sitting next to me. It's almost like those high-balling Republicans aren't listening to the president.

But now that the Lord's man in the White House has put his stamp of approval on mass transit, I'm amazed at how courteous drivers have been toward those of us following our president's directive (and bollocks to you who say we do this out of necessity, not choice!) as we wait for the bus or walk.

For instance, drivers have, uh, "donated" lots of items to me as I wait at the bus stop. I've had several half-full soda cans tossed my way, presumably to quench my thirst in the hot Florida sun. Others have been kind enough to throw me half-eaten food, perhaps because they think I am homeless. One man hit me in the leg with a piece of gum. He probably wanted me to catch it.

Then there are drivers who worry about my physical well-being. They cut me off in a crosswalk to test my reflexes. One lady swerved toward me as I walked along the road; maybe I looked lethargic, and she thought I needed to get my cardio going. So often, drivers honk their horns to say "hello." Or they'll yell (no doubt good-natured) greetings from their vehicles. Some have even yelled about me being "homeless." I know walking is weird, but I'm not homeless. I appreciate your concern.

What I'm saying, Orlando, is thanks for the support you've given me and my fellow LYNX riders. W would be proud.