Penguins are just so cute! And the fact that they get "married"? If that isn't an endorsement of intelligent design and the need for a ban on gay marriage, by gosh we at Happytown™ do not know what is.

In fact, we've been trying to spend as much time with the little tuxedoed critters as possible so we can learn how to live right. (Ever seen one hanging out at a strip club?) But at this latitude that can be tough. Short of catching March of the Penguins again at the second-run theater or wearing out our season passes to SeaWorld, there's precious little opportunity to rub wings with them.

So you can imagine how excited we were to find out that this year's Festival of Trees at the Orlando Museum of Art included live Magellanic penguins on display Nov. 12 and Nov. 15. These are the warmer-weather birds native to South America, not the emperor penguins featured in March. No matter, they're moral birds that'd support President Bush if they could punch a touch screen.

So you can imagine our disappointment when the display was canceled, thanks to a protest organized by ARFF (Animal Rights Foundation of Florida). "These are exotic animals," Holly Bowman of ARFF told us. "They are not domesticated. They are denied everything that is natural to them, all for our entertainment." Radicals.

Sherry Lewis, marketing manager of the Orlando Museum of Art, told us the birds are treated well. "These particular birds from SeaWorld are trained as ambassadors, and are quite used to traveling and meeting new people," Lewis wrote in an e-mail.

But ARFF prevailed, causing SeaWorld to nix this stop on its traveling show. "The cancellation of the captive penguin display marks the third time in four months ARFF have thwarted SeaWorld's plans to pimp out their penguins," Bowman wrote in a follow-up e-mail after the display was scuttled. (The other times were promotional events for March.)

Great. Now we'll probably end up hanging around with seagulls, up to 14 percent of which are lesbians.

If we were cynics – which we're not – our hackles would have been raised by the city's decision to move its Parramore police substation. On Nov. 16, according our invitation to the grand opening shindig, the city will christen its new, relocated Parramore Community Center Police Office in the building that houses the City View apartments on West Church Street.

Cynical denizens of Orlando – with whom we are disassociated – will likely note that the new substation is about a block from the Orlando Police Department headquarters. They will probably also note that the substation is being moved from a high-crime area at the intersection of Parramore Avenue and Anderson Street to a very tony, mixed-use apartment development that was subsidized to the hilt by the city. These wags would say that the city moved the cops to beef up the police presence in a neighborhood the city has a lot invested in.

But that's not what's going on here, according to the Orlando police. The old substation had pest problems, and the cops wanted it moved. Plus, the new location saves the city some $600 a month. "It was a cost-savings move," says Sgt. Barbara Jones. 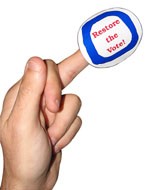 In 1868, the Florida Legislature passed a law banning convicted felons – even those who had served their time – from having their civil rights restored. The law was Florida's reaction to Reconstruction, during which the federal government shoved black suffrage down the throats of reluctant Southern states with the threat of not allowing them back into the union. Florida acquiesced, but jabbed Uncle Sam in the eye by broadening the definition of crimes for which citizens could be stripped of their rights.

Today, 137 years later, the disenfranchisement law is still in the state constitution; Florida is one of only three states that permanently bars felons from voting. (Felons can apply to have their rights restored, but it's a long process with no guarantee of success.)

On Nov. 14, the United States Supreme Court refused to hear an appeal of a class-action suit challenging disenfranchisement. Johnson v. Bush argued for 600,000 people who did the crime and served the time, and now want the right to vote – among other rights – restored.

So the law still stands. Which doesn't sit well with a group of people who want to change the state Constitution to something more in line with the rest of the country. Some of them massed Nov. 14 at the Orange County Commission chambers to tell their stories to the Orange County Legislative Delegation, hoping to garner support for a constitutional amendment to end disenfranchisement. They were led by a guy who has a personal stake in the issue.

"I'm trying to get my rights restored," says George Crossley, director of the ACLU's Central Chapter and a convicted felon who served more than three years in prison for trying to hire a hit man. "I filled out my application, and it's been over a year."

Members of the AFL-CIO, ACORN and the NAACP were there to tell similar stories to the Orange County delegation. But Crossley, with reformed-televangelist mien and stars-and-stripes necktie, was the ideal spokesman. He says he'll take the fight to Tallahassee if he has to. "It's going to get on `the agenda` or we will shut down the legislature," he says. You go, George.

This week's report by Jeffrey C. Billman and Bob Whitby.

I don't have an answer for this problem, nor would I expect you to have one. The issue is many years old but I would like to share some observations with you regarding: I-4 speed limit.

I have been driving into, through and out of the Orlando area for more than 11 years, going to Lockheed Martin (retired engineer) and other attractions.

The issue is the posted speed limit of 50 mph. I've noticed the new electronic signs and wonder why would the money would be spent for signs that are ignored by more than 95 percent of the traffic?

The time of day or night does not influence the speed. Typically the majority of cars/trucks/vans etc. are going in excess of 65 mph (some going much faster than that) "all" the way through town and the 50 mph speed zone.

In 11 years I don't remember seeing patrol cars, except at accidents, on I-4. I'm sure they are there somewhere.

If traffic is going to flow at 60 mph or higher at all times the speed limit needs to be raised on the signs or turned off all together or enforced. The latter seems impossible as nearly every car would have to be ticketed every day, 24/7.

If changes are made for the mass as opposed to the individual then raising the speed limit benefits the mass and therefore should be done.