Our bud Christopher Wilson, the Lakeland Internet entrepreneur busted on obscenity charges last year, is out of jail and will soon be out of business. Wilson accepted a plea deal Jan. 13 that drops all felony charges against him and 295 of the 300 misdemeanor obscenity counts. He'll get probation for the five remaining counts, and he has to close his website, www.nowthatsfuckedup.com, and turn over the domain name to the Polk County Sheriff's Office.

"What you've got here is, you've got the military getting upset about the fact that soldiers are sending in graphic images depicting the war in Iraq," Walters said then. "This doesn't comport with the Bush administration's view of how the war should be reported and how it should be depicted. And then the next thing you have is Chris Wilson sitting in jail. I don't know that the two are connected. Any reasonable person would say something sounds fishy here, and we intend to investigate it."

After the plea deal, however, Walters was sounding much more pragmatic. He still believes the military wanted the site shut down, but short of someone breaking rank and saying as much, there's no way to prove it. That and the fact that Polk County prosecutors were considering racketeering charges against Wilson made accepting the plea deal an easy decision. "We would have likely ended up with a conviction and arguing some of these issues on appeal," says Walters.

Wilson must turn over his domain name to Polk County within 10 days of his formal sentencing. When the sheriff's office gets their hands on the site, reports The Lakeland Ledger, they will post a notice for all who log on warning that Wilson was criminally prosecuted and that violation of Florida's obscenity law is a punishable offense. In other words, if you use the Internet to look at naughty bits, the sheriff of Polk County is after you.

As for Wilson, he says he's moving to Orange County. Wise move, Chris.

In what's becoming a semi-regular feature (but not a Semi-Regular Feature, if you know what we mean), we hereby announce that yet another production company is in town scouting for people to participate in yet another reality show. What is it about Orlando that makes producers think we're so representative of middle-of-the-road America? Oh, yeah.

This time it's Cash in the Attic, a thinly veiled rip-off of PBS' Antiques Roadshow. (It's actually the U.S. version of a 4-year-old British show.) The Cash twist is that someone comes to your house and scrounges through your crap to tell you if you're going to be rich, instead of you having to haul it to an auditorium and set it up yourself under the klieg lights. If you're interested and have an attic full of crap, call (212) 627-1181, extension 400, or fill out an online application at www.leopardfilms.com.

It's weird. You have these two NPR affiliates – 89.5-FM WFIT in Melbourne and 90.7-FM WMFE in Orlando – that are 50 miles away from each other, yet worlds apart in their approach to programming.

WMFE is all buttoned-down and business-suited; it's radio for the briefcase-toting set. You get classical music (an NPR staple), news from the BBC, Morning Edition, Fresh Air With Terry Gross, All Things Considered, Car Talk, A Prairie Home Companion, that sort of stuff, all carefully selected not to upset Orlando establishment types regularly called upon to write fat support checks. None of it sucks, but none of it soars. WMFE could be a repeater station from an NPR affiliate in Des Moines and it would take you three weeks of listening to catch on.

WFIT, on the on the hand, has some character. From the music – some hosts even play rock and/or roll! – to news programming that's heavy on Latino content, the station is a better reflection of its market than WMFE is. (On second thought, maybe WMFE is a perfect reflection of Orlando … hmmm.) 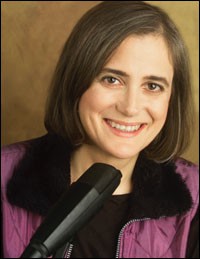 And now that WFIT has picked up Democracy Now!, the take-no-prisoners daily news show hosted by Amy Goodman, the difference between the two is even more stark.

If you've never heard Goodman do an interview, you might be in for a shock. She isn't deferential to the powerful, and she asks questions that people really don't want to have to answer; in other words, she does what journalists should be doing. If you think her anti-war stance makes her a "liberal," you're wrong; she's famous for giving Bill Clinton a raft of shit when he called in to her show on Election Day 2000.

Goodman is coming to the Melbourne's Gleason Performing Arts Center, on the campus of the Florida Institute of Technology, Jan. 21 to talk about "independent media in a time of war" and flog her book The Exception to the Rulers: Exposing Oily Politicians, War Profiteers, and the Media That Love Them. Check the WFIT website, www.wfit.org, for details.

Puppy-wuvers, your pwayers have been answered, at least tempowawily: Pet Rescue by Judy (www.petrescuebyjudy.com) has been given a one-month stay of eviction.

"Judy" is Judy Sarullo, who has run her "no-kill" shelter for strays for a decade. Since April, Sarullo has been housed in an old animal hospital on Tuskawilla Road. Two weeks ago a neighbor complained about the shelter and code enforcement told Sarullo she had to leave. She's been trying to find a new home for her 40 dogs and 30 cats since.

Originally she had to be out by Jan. 18, but a judge gave her another month. She's still got no place to go, but at least Sarullo and her dogs have a little more time to figure it out. She estimates it will cost about $500,000 to buy a place with enough land and a building to house all her wards, some of which she's kept for more than year while they wait for homes.

"I'm not going to put them in a kill shelter," she says.