And now it's time for another installment of What's Up With Ric?™, our attempt to keep you up to date on the comings and goings of Orlando's favorite congressman, U.S. Rep. Ric Keller!

Ric is a big fan of Pell Grants; he talks about them all the friggin' time. Not only did he use them to get into college, but he also chairs the Pell Grant Caucus in Congress. Pell Grants = good in Ric's math book.

Which is why we were shocked – shocked! – that he voted to cut $11.9 billion from student loan programs that help poor kids. The move was part of the GOP-pushed $39 billion in budget cuts passed by the House of Representatives Feb. 1. It was a razor-close vote: 216-214. If Keller had switched sides, the vote would have been a tie, and thus failed.

We asked Ric's office to comment on this seemingly odd vote from a Republican who loves him some student aid. Ric's chief of staff, Bryan Malenius, told us, "The idea that the $11.9 billion figure will hurt college students is pure fiction dreamed up by some intern at the [Democratic National Committee]. Not a single student in the United States will have one penny less in financial aid. The student loan rates will be unchanged at 6.8 percent fixed. Loan origination fees will actually drop from 4 percent to 1 percent. … The people who will take a hit will be the lenders who will see their subsidies for these loans drop."

Of course a fixed rate is good if rates go higher; if they drop, not so good. Plus, making it less profitable for companies that make the loans might drive some of them out of the student loan business.

The good news: We're not nearly as mean as we used to be. The bad news: We're still dicks when it comes to the homeless.

So sayeth the National Coalition for the Homeless, which recently released its annual list of the "Top 20 Meanest Cities" as part of a larger report, A Dream Denied: The Criminalization of Homelessness in U.S. Cities. In the 2003 report, Orlando rated No. 9. Three years later, we're not even in the top 20. (Sarasota was ranked No. 1, and was the only Florida city to make the list.)

Orlando did rate an honorable mention, however, for its concerted effort to run Food Not Bombs, a group that feeds the homeless, out of Lake Eola Park [Happytown™, May 12, 2005]. Hooray for us!

Now for your Happytown™ tax tip o' the week: Do not pay Uncle Sam too much money. Follow along, please.

Last week, a representative from the Orlando Regional Chamber of Commerce stumbled into Happytown™ HQ to remind us about the Earned Income Tax Credit, which since 1975 has helped families with low and moderate incomes get refunds from the tax man. According to Maria Diaz Urbino, ExtraCredit's director, $22 million in EITC rebates have gone unclaimed in Central Florida. You can make up to $37,263 (if you file jointly and have two kids) and still qualify for the EITC, and receive as much as $4,400 back. Learn more at www.extracreditorlando.org or by calling (407) 839-HELP. Send us the money you save.

Finally, we note that the Association of Professional Animal Waste Specialists is holding its annual convention in Orlando Feb. 10-12. In other words, people who pick up dog shit for a living are gathering in Orlando to talk about … picking up dog shit for a living. Need to feel better about what you do for a buck? Know this: One of the events at the APAWS conference – which is being held at the Holiday Inn International Drive Resort, 6515 International Drive, but isn't open to the general public, can't for the life of us understand why – is called the "Turd Herding Contest."

This week's report by Jeffrey C. Billman and Bob Whitby 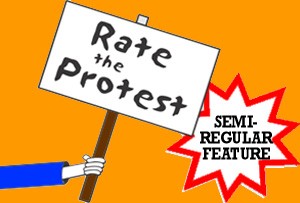 Orlando is such a hotbed of activism these days it's hard for concerned, engaged citizens to figure out where to exercise their First Amendment rights. So we've devised this quick guide to local protests to help you weed out the duds. Happy shouting!

WHAT: Codepink Orlando's "Don't Believe the Lies" sidewalk rally, Jan. 31
WHERE: Orlando's "speaker's corner," aka the intersection of Colonial Drive and Bumby Avenue

The cause was hatred and mockery of everything George W. Bush stands for, especially war, spying and poor grammar. Timed to coincide with the State of the Union address.

Signs were pointedly vitriolic ("We support our troops when they shoot their officers"), but often far too long to be read by people in cars whizzing by at 45 mph. Keep it pithy, people!

One lady in a rubber Bush face mask and one guy in an Uncle Sam top hat do not street theater make, sorry.

Orlando's favorite anarchist, Ben Markeson, was in attendance, and in rare form, shouting, "Fuck Bush! Fuck war! Fuck everything he stands for!"

The anger seemed rote, as if five years of shouting about Bush has tempered things just a wee bit.

WHAT: World Can't Wait's State of the Union rally, Jan. 31
WHERE: Outside Orlando City Hall

The cause was hatred and mockery of everything George W. Bush stands for, especially war, spying and pissing off the international community.

Some of the signs were so long they induced cramps when copying them down; bonus points for employing two swastika-themed placards, which visibly riled a few passersby.

Props for paying the extra $5 to get a bullhorn permit; nothing says "creepy police state" like a bullhorn.

Orlando's favorite anarchist, Ben Markeson, was not in attendance.

Richards Plavnieks, the guy with the bullhorn, was a fine orator and went hoarse shouting his prepared indictment of the government at passing cars.

WHAT: United American Committee's "Rally Against Islamofascism," Feb. 1
WHERE: Intersection of State Road 436 and Aloma Avenue

Cause? Praise and coddling of everything George W. Bush stands for, especially nationalism, zealotry and unquestioning obedience to authority.

There were no signs because no one bothered to show up.

There were no theatrics because no one bothered to show up.

Like everyone else, Orlando's favorite anarchist, Ben Markeson, was not in attendance.

There was no anger because no one bothered to show up.

Got a protest you want rated? Send us the details and we'll be there!