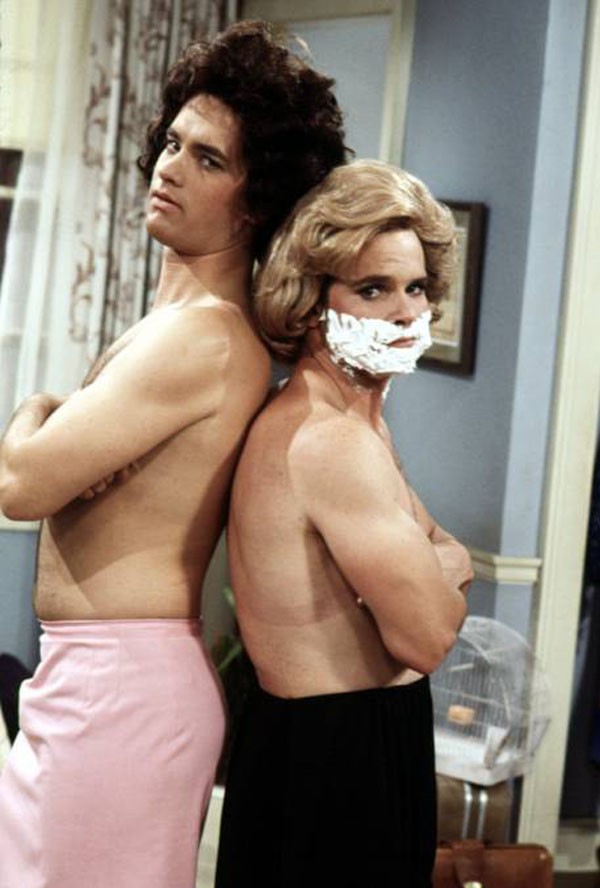 We should have seen this coming. Well, actually we did, but we chose to cover our eyes and blissfully whistle along to our own imaginary theme song (like that one from television’s Bosom Buddies ) as we watched the ascension of our new favorite power couple, CannonHair. Florida Speaker of the House Dean Cannon was clearly the chiseled lead in this sitcom romp through policy and sloganeering, while Senate President Mike Haridopolos fopped and flopped like a lovable sidekick in the Buddy Lembeck or “Boner” Stabone mode. It was going to be perfect: all secret handshakes and pratfalls and prom date shenanigans. But then, as it is wont to do, ambition reared its ugly head.

Late last week, the hair-half of our Republican construct officially announced that he would be going up against cardboard astronaut and U.S. Sen. Bill Nelson in the 2012 U.S. Senatorial sweepstakes, meaning that instead of spinning balls on his nose for the next couple of years for our enjoyment, he’ll be campaigning and trying to sound like an electable adult. Boo.

“I am proud to say I’m in the race but of course focused on the issues facing Florida as we face a very difficult budget right now,” Haridopolos faced FOX 35 News. Of course.

It got us to thinking about exactly what we know – beyond the obvious sidekick cuddle- factor – about Mike Haridopolos. We only had to dig a couple days back before the “official” campaign announcement to get to a little bit of political hopscotch. Last week Haridopolos tried to be all tough-jawed on the high-speed rail project, saying that he would support it only if private enterprise picked up the remaining $280 million not being funded by the federal government. Huh. This, after the Senate president went to bat so heartily for the less appealing SunRail back in 2010. Some of his peers called that fishy.

Well, not as fishy as Haridopolos’ history. Last year our boy fell afoul of the state ethics commission for failing to properly fill out his public disclosure forms from 2005–2008, because he forgot he had a $400,000 investment property in Mt. Dora (also that he was making money on the side via a consulting firm). We checked Mr. Hair’s disclosures from 2006–2008 and can’t really make too much sense of them: two homes in 2006 with a combined value of $901,000, two homes in 2007 adding up to $825,000, two homes in 2008 adding up to $1.6 million. All of this on a $30,000-a-year government salary? Not exactly. Haridopolos also raised eyebrows for double-dipping on the state dime when he took a lecturing gig at the University of Florida in 2008; he was paid $75,000 for nine months of doing nothing. He wrote a “manuscript” for Brevard Community College for which he was paid $150,000 in public money; you can only find that book at the BCC library, though you probably wouldn’t want to. The guide to being an effective legislator says, “a cell phone will be essential,” according to the Orlando Sentinel. Brilliant!

Surely there’s more where this came from – and hopefully Nelson’s team is shovel-ready – but for now, as Haridopolos dives into the treacherous world of fundraising favors, we can only lament the passing of our favorite non-porn guy-on-guy story arc. Farewell, CannonHair. We hardly  knew you.

Usually, when we have to write about a complex, boring subject like the troubled housing market, we have to smoke some synthetic weed and flip through real estate catalogs by candlelight to get the creative juices flowing. But we were recently reminded that to demonstrate the toxic growth of suburbia, all we needed to do was soberly point at new homes reeking with the rotten-egg sulfuric fumes of cheap “Chinese drywall.” The material reportedly turns metal fixtures inside homes black and corrodes copper tubing, all while giving tenants headaches, asthma attacks and even nosebleeds. If that shit isn’t evil, nothing is.

Recently, a company called Chinese Drywall Recovery USA sent us a note to say that it was holding “community meetings” around the coast of Florida last week to “help victims of Chinese drywall to negotiate a suspension of mortgage payments pending remediation of their homes.” (According to the federal Consumer Product Safety Commission, the vast majority of these “victims” are in Florida, where 57 percent of total cases in the U.S.  are found.)

Naturally, we thought this could be another tale of recession vultures making lemonade from someone else’s lemons, but when we contacted the company, we were told it hadn’t made a dollar yet, and when it did, the money would come from the lenders, not the distressed homeowners. “We want these people to be able to leave their homes and go someplace safe,” says John Campbell, who along with his wife, founded the company after some of their own investment properties in Slidell, La., were discovered to have the dreaded toxic taint of hurry-up-and-build (and Chinese drywall). Campbell says that some people are staying in toxic homes because they’re still obligated financially; freezing the payments would allow them to rent a livable residence without paying for the nosebleed huts as well.

Campbell’s company is also pushing for a permanent reduction in the principal of the mortgaged homes, given that even after remediation, tainted history is much harder to remove than tainted drywall.

It’s a Herculean challenge, given the task ahead: forcing banks and politicians not only to listen, but to act. Hopefully, the whiff of the dollar will be adequate motivation for the Campbells to doggedly pursue the issue until it becomes a bona fide Drywallgate: “We’re only going to get paid if we can persuade the elected officials in Washington to get Freddie Mac and Fannie Mae on board with a program along the lines of what we’ve been talking about,” Campbell says.

One encouraging, if not predictable sign: U.S. Senator (and mortal enemy of chromium-6) Bill Nelson, is already on the case. Wouldn’t he look good in a Captain Planet costume?

A few minutes after midday on Jan. 12, husband and wife Jerry and Val Demings, the heads of the Orange County Sheriff’s Office and Orlando Police Department, respectively, strode into the downtown Sorosis Club together to speak to the local League of Women Voters chapter about The State of Crime Fighting in the area or something like that. Since we had been to a similar function only weeks earlier at OPD headquarters, we chose to cover this event in our capacity as gossip rag, hoping to get some rare P.D.A. shots of the husband-wife tandem.

What a disappointment. The two entered totally not holding hands, then, when called to the stage, were seated at a table draped with an opaque white curtain, thus making it impossible to infer any intimacy from the proximity of their ankles. Jerry threw us some crumbs, however, with one acknowledgement of their marriage: “The relationship between the Orange County sheriff and the Orlando police chief has never been better,” he said to mechanical laughter. Sigh. On to business, then.

Not even the bourgeois clinking of silverware at this catered lunch could hide the obnoxious sound of an economic crunch. One audience member, for instance, asked the tandem why neither county nor city police is installing dashboard-mounted cameras for all its police vehicles. Jerry responded that those cameras are a “luxury” much further down on his list of priorities than filling fiscally unfillable department vacancies, replacing aging radio equipment and giving overdue raises to deputies. “There are lots of things that we’d like to have, but we just can’t afford it,” he said.

Not bad. In a response to another audience question, Jerry gave a swift slap to the Arizona-style immigration law proposed for Florida that would allow police to check immigration status at routine traffic stops. “My deputies have their hands full enforcing state and local laws,” he said. “If we’re enforcing federal laws , I think we’re diluting our effectiveness.”

Impressive. As the presentation wrapped up, we admit our fear for the Demings’ relationship turned into hope, a hope that maybe, well … what we mean to say is … if you ever end up alone, Jerry, give us a call.