The week where Gov. Rick Scott made a big ass out of himself to the Big Apple, Democrats bit back at Mitt Romney's perpetual gas leak and Sanford considered arresting the media for doing its job. Message control! 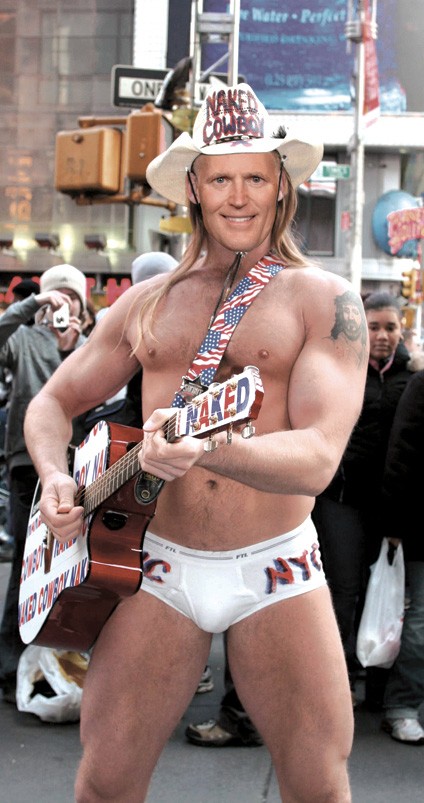 Start spreading the news! As the majority ofour dumb state lies in financial dust – coating our numerous “kitchen table” lacerations in a sticky layer of orange juice – on March 29, Gov. Rick Scott chose to keep his glass of citrus swill deceptively half-full. Skillfully timed with an appearance on Fox News with Neil Cavuto, Scott unleashed perhaps the most ham-fisted treatise imaginable in the form of an open letter to the 100 biggest corporations in New York.

“Do you like paying higher taxes to do business in New York?” his red crayon rattled off. “As a former CEO and entrepreneur, I know my answer to that question is absolutely not.”

What makes the rest of this exercise so hilarious – beyond its flashes of carpetbagger desperation, that is – is how much it tells us about our governor. Still way shy of his promised 700,000 job uptick, Scott is apparently taking a shortcut through scatological delusion.That, he assumes, is the language of money.

“Florida is a right-to-work state with no personal income tax, low business taxes, great teachers, the best beaches and weather in the world, and over all great quality of life – factors that every CEO and entrepreneur considers,” it shamelessly continues.

See that? Scott still thinks he's a CEO! For those keeping score, Scott has even more end-times delicacies he'd like to sell you with a side of Everglades swamp: he intends to phase out the corporate income tax; Florida's got the best workforce and job training according to his friends at the U.S. Chamber of Commerce; under Scott's tutelage, the state has “eliminated close to 500 burdensome regulations with hundreds more in the pipeline”; you can live cheaply, you can go to the beach, and you will never be unhappy again!

Just to drill it in more jaggedly, Scott then really ups the ante with this baiting grind: “If you earned $500,000, was it worth the extra $35,000 to live there? According to cost-of-living calculations, a salary of $75,000 in Tampa, Florida, would be equal to making $125,131 in New York City.” In other words, come on down to Florida, where you can pay your staff less and they won't even notice! That's how we do it in the Sunshine State.

Actually, the “Dear Santa” letter came just one day before the state's unemployment numbers were released, and, to everyone's surprise, there was a dip from 9.6 percent in January to 9.4 percent in February with 10,000 jobs added! On March 30, the Florida Democratic Party spelled out the reality of those figures. They are bunk. Florida still has the 45th highest unemployment rate in the nation, trailing way behind Ohio (7.6 percent), Texas (7.1 percent) and Georgia (9.1 percent), according to the Bureau of Labor Statistics; also, along with the dip in unemployment came a dip in jobs. Everything is relative!

As the Tampa Bay Times pointed out, the absence of real context to Scott's missive meant that other key factors like our ridiculous foreclosure problem, the potential for hurricanes and the fact that 68 percent of Florida residents still believe that the recession sky is falling were conveniently left out. But such salient reminders mean nothing to Madison Avenue millionaires hip to the idea of trashing it up in the name of cost cutting. Nor does the fact that our state is currently beating Alabama and Mississippi in the national racism stakes or that, um, rich gay peopleare actually allowed to marry in New York. Maybe he thinks they're as dumb as he is?

“As you are exploring cost-saving options and evaluating whether or not you want to continue paying higher taxes, I ask you to consider doing business in Florida,” his letter concludes. “Come for our beaches, sunshine and incredible weather, and stay for our business opportunities.”

Tell that to Solantic, Scott's own former company that recently left Florida for the relative serenity of Tennessee. Or, better yet, don't tell anyone. It's embarrassing.

Speaking of fact checking awkward CEOs parading as figureheads, on March 28, we skipped across the street over to the Obama for America Orlando office for some press-conferenced backlash to Republican Ken Doll Mitt Romney's latest disjointed mumblefest on energy policy, and boy are we glad we did! You may have noticed that Romney's been trying to paint his presumed opponent Barack Obama into a gas-is-too-damn-high corner lately, clinging to the last vestiges of “drill baby drill” and whatever else it is that Republicans say to their idiot base, even if his own policy, according to every source, has been flipping and flopping since his days in the Massachusetts capital. Hey, guess what? Willard knows nothing of which he speaks.

Though we were the only English-speaking media in attendance at the Wednesday presser, it was worth it to hear local party chair and state Rep. Scott Randolph, D-Orlando, mouth off in response.

“‘Drill baby drill' is still alive because the Republicans can't move off of bumper-sticker politics. That's where they've taken policy in general,” he said. “Do they really still believe it? It's sort of a sad state of affairs.”

Even sadder when you consider the facts: Our dependence on foreign oil is the lowest its been in 16 years; oil production on public lands is up 13 percent under Obama; fuel-economy standards are up in the auto industry for a good reason; there is no magic bullet to stop the global speculation on oil prices that's driven the pain-at-the-pump headlines of recent months. It's all an illusion!

Obama for America national campaign co-chair Lynnette Acosta drew an even starker comparison to Romney's shapeless, unregulated vision of today. It's just like the days of Enron, she said, giving corporations “full reign to rip us off again.”

“Whatever the drilling policy is right now is not going to lower prices,” Randolph said. “The most immediate solution is stopping the speculation.”Or maybe, stopping Romney.

Oh, hey, and lest we forget the awesomeness of Sanford government and law enforcement (see this week's cover story for the full immersion into idiocy), for a minute there it looked like Sanford had outdone even itself. On March 28, the little burg of controversy sent out a short press release saying that the media was getting a little too nosy. How nosy? Well nosy enough that “law enforcement officials will not hesitate to make an arrest for stalking” when reporters try to discuss the Martin-Zimmerman debacle with city staff after hours and off property. Naturally, a hilarious firestorm of irony followed, with media types wondering why it was so easy for Sanford police to arrest unarmed reporters and not somebody with a gun who killed a minor. Irony does not work in Sanford.

Anyway, by Friday Sanford reeled it back, according to the Miami Herald, with a statement saying the city “regrets any inconvenience caused by the improvident wording of the Advisory.” Welcome to Sanford: land of regrets and inconveniences. Here's hoping New York wasn't paying attention.