The attorney general's office wants you to die, Rick Scott wants you to remove your blouse, Publix wants a tomato in its face and Florida loves its Nazis! 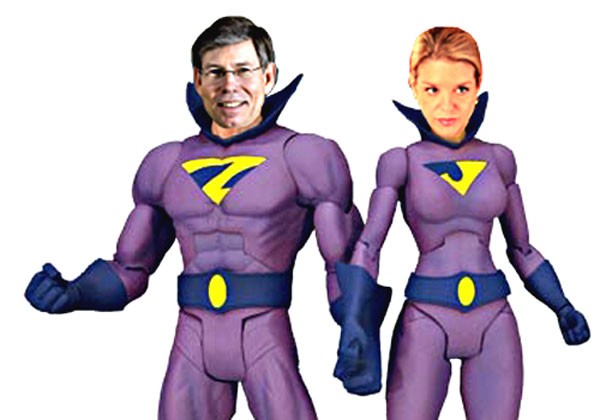 It starts with a twinge in the  throat, the slightest aberration like a dried- out feather or stray blond hair; you sniffle, your left eye twitches, the entirety of all humanity and its well-being disintegrate into venomous red dots inside your eyelids, and, here it comes: sneeze! That’s how Attorney General-elect Pam Bondi, she of the FOX News pedigree and hair to match, came upon us – an unexpected virus composed of varying strains of political injustice intent on visiting havoc upon the world. We shouldn’t have been surprised – though the position she was washed into should be about protecting Florida’s citizens from fraud and crime, the person she is about to replace, Attorney General Bill McCollum, has utilized his bully pulpit to fight gays and health care. Healthy gays are out to get you!

Form of: a pink bucket of water!

Turns out that Bondi and McCollum – at least for the time being – are Wondertwins; she’s just the prettier one. On Nov. 17, the dastardly duo sent out a joint plea to 13 new attorneys general and governors encouraging the budding new leadership to hop on board with McCollum’s big 20-state federal lawsuit against health care reform.

“We anticipate seeking leave of the court to update our plaintiff names and to add new plaintiff states following your inaugurations,” the two announced, each holding one hand to a keyboard (the case is scheduled for “oral arguments” in Pensacola on Dec. 16). “Having a majority of the states litigating our constitutional rights is a powerful message. … We also share your concerns about the significant impact that the federal health care law, as an unfunded mandate, will have on your  state budgets.”

Wait, what’s that? The bogeyman here is Medicaid, a state-maintained system that works so well right now that any thought of improving its efficiency should be summarily dismissed, even if a recent Government Accountability Office report last week showed that the health care reform’s implementation would considerably reduce the growing national deficit over time. States’ rights! Oh, and it would help poor people – even poor single people who can’t get Medicaid in Florida right now – so fuck that!

In other Bondi news, she officially earned our (well more of our) ire last week when she somehow seduced former Democratic attorney general hopeful Dave Aronberg, who is sort of our boyfriend, into her wicked lair of transition. Aronberg will be heading up the “pill-mills” and prescription drug abuse department of her office. Awesome. Hey, Dave. Bring us home some pills. Pam’s made us a little sick.

Speaking of sick, did you know that Gov.-elect Rick Scott is a crazy bald pornographer? Well, that’s the story McCollum tried to tell the lazy public during this summer’s primary race, but Scott’s tenuous connection to Hispanics with their boobs exposed never really got any traction. The story goes something like this: Scott owns two million shares in a company called QuePasa.com, which is basically some Spanish (fly!) version of MySpace for Mexicans. QuePasa, in turn, does business with the fine Mexican iteration of Playboy via some sort of babe-of-the-week feature. Scott even bragged during his campaign that he was creating jobs through this south-of-the-border flirtation. Therefore, Scott wants to make Spanish sexytime with all kinds of Latin lovers (even gay ones – they’re allowed on the site, too!) for the rest of all time.

The suntan-oil scented controversy drifted away – just like the Medicare fraud one, apparently – until last week, when the Christian Family Coalition finally caught wind of the juicy affair.

“We cannot have a governor in the state of Florida that invests in companies that sell pornography,” CFC member Rev. Mark Boykin told the Miami Herald. “We are asking that before he takes the oath of office, Gov.-elect Scott gets rid of his stocks from QuePasa Corporation. The governor of the state of Florida should not be benefiting or have an interest in pornography. It goes against our family values.”

Attention, supermarket fetishists: The Publix on Aloma Avenue in Winter Park is back. Bigger, better and reeking of barbecued ribs, the store garnered a respectable crowd for its grand re-opening Nov. 18 – including about 30 people protesting outside.

The demonstrators were mostly students, calling Publix out for not agreeing to the demands of the Coalition of Immokalee Workers, a collective of migrant laborers based in Southwest Florida who pick the majority of the tomatoes bought by the nation’s food industry during the winter months. “What we’re arguing for is nothing radical,” said Carlos Hierro of the Youth and Young Adult Network of the National Farmworker Ministry. “We want Publix to live up to the ethical business practices  they espouse.”

The CIW and its allies want Publix, among other things, to pay an extra penny per pound for tomatoes picked by the workers to alleviate their “sub-poverty” wages. (Currently, the average piece rate for a 32-pound bucket of tomatoes is 50 cents.) If you think you know who David and Goliath are in this story, think again: In the past five years, the CIW has persuaded virtually the entire fast-food industry, three of the nation’s largest food-service providers and just days ago, the Florida Tomato Grower’s Exchange into paying that extra cent per pound. (OW will report more on the coalition and its efforts early next month.)

At the beginning of the event, a delegation from the protest met with a Publix manager inside, and if not for some T-shirts twisting the Publix logo to spell out “Poverty,”  the exchange could have been a Publix  commercial.

After joshing around with the manager inside, the delegation returned to the street to be angry again. Between chants, Interfaith Action organizer Jordan Buckley sniped at Publix’s fair-trade coffee. “While Publix is willing to pay a slight premium to lift wages abroad, they refuse to do the same in their home state,” he said.

The sole counter-protester, a man flicking off the crowd from his black Tacoma, answered Buckley’s analysis with his own measured critique: “Fuck you – poverty’s good!”

Eddie Izzard famously marveled  at the surely exhausting nature of being a “mass-murdering fuckhead,” like Pol Pot or Hitler. “You must get up very early in the morning,” he joked. “Death, death, death, lunch, death, death, afternoon tea … ”

And actually, it did take a monumental, continent-wide effort for Hitler to come so close to exterminating an entire race. It took manpower and firepower alike to kill six million Jewish people. It took infrastructure, people! You know, things like trains to get them all to their final destination. Trains like the ones run by the awful, awful folks at SNCF, a French – You knew it was the French, didn’t you? No skipping ahead, kids. – state-run railroad, the same awful, awful folks who are currently bidding to bring high-speed rail to Orlando.

We’re not oversimplifying this: The same train company that transported Jews to the gas chambers during WWII might bring high-speed rail to Orlando. Naturally, that’s a PR nightmare for SNCF and the state of Florida, right? Well, not really. While it’s true that Democratic Rep. Ron Klein, who supports high-speed rail, told SNCF to shove it back in September, state lawmakers as a whole have been quiet over the bid.

But apparently, something got through to the railroad since they’ve now kinda-sorta apologized for being awful, awful folks. In a Nov. 4 statement posted on their English-language website, Chairman Guillaume Pepy expressed “sorrow and regret” over his company having once been evil death-mongers, but did add a qualification that, well, the Nazis were really  fucking scary!

“The Nazis … directed these terrible actions, determining the composition of the trains, the types of wagons and even the train schedules,” says Pepe Le Pew. They were, say it with us, just following orders. That defense didn’t work at Nuremberg; we have yet to see if Florida has the same common sense.