The week where halftime in Tallahassee brought a snippy House budget and the egregious (if boring) yawn of a redistricting debacle; also, Orwellian un-persons can't run for city office! We are all invisible now. 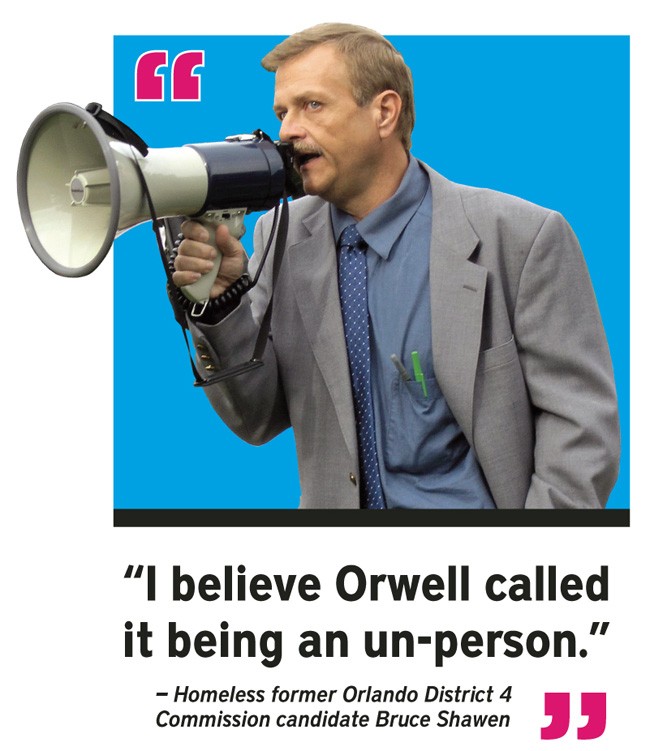 Oh, we’re halfway there. Our glass is half-empty/half-full, our eyes are half-open and that half-and-half (not the hooker kind!) is half-chilling our halfhearted cup of coffee. Just one month into its two-month work year, the Florida legislature pulled out some half-baked fireworks, a Haridopolos wigand absolutely no surprises last week to celebrate session halftime. Are you excited yet? Even half-excited? No.

One half of the biggest news to come across the Tallahassee transom was the news that your state House of Representatives had staged a mass love-in and moved forward with a completely reasonable budgetagreement on Feb. 9. Except, as expected, it wasn’t so much an agreement as an audacious Republican Party steamroll. According to the Tampa Bay Times, the House’s version of what a budget should look like – the Senate is taking its sweet “brah” time on this – includes a full litany of awesome indecencies. Sure, House Speaker Dean Cannon’s band of bullies may have tried to make the whole $69.2 billion budget palatable by hooking it around Rick Scott’s $1 billion education increase lie (it doesn’t quite make up for the $1.3 billion in cuts last year, reason argues), but mostly the whole thing – which passed squarely on party lines, natch, 79-38 votes – is a Running With Scissors take on cuts, cuts, cuts: crazy people included.

The House is proposing a broad-based cut to hospitals amounting to 7 percent, a 2.5 percent cut to nursing homes (because that’s smart when the whole world is looking at how horrible our nursing homes are) and absolute removal of podiatric and chiropractic care from Medicaid coverage. Aspiring college students will be happy to know that their tuition will be raised by 8 percent while their Bright Futures scholarships will endure a 9.3 percent hacking. But the biggest news – amid Senate President Mike Haridopolos’ flagging attempts to get his shiny, new, unaccountable private prisons plan to fly with his own party’s rank and file – is the House’s intention to shave nearly 1,500 jobs from the prison system out of 4,500 total public sector state jobs. Let’s see, what else. The budget still includes $2 million for “crisis pregnancy centers” – the little prayer circles of lies intended to misinform pregnant women in crisis – and another $55 million in Public Education Capital Outlay funds that will not be going to traditional public schools; instead the money will exclusively aim to “equalize” privatized charter schools with new-construction money. Democrats – who, let’s face it, are just there for the abuse at this point – balked, of course, but proposed amendments shifting some of the money to public schools instantly died in the fetid Republican air.

State Rep. Scott Randolph, D-Orlando, issued a statement on Feb. 9 after voting down the proposal, which he says “pits grandmothers against their own grandchildren and public schools against public hospitals.”

He dug a little deeper on the charter school nonsense: “In addition to the thousands of jobs that will be cut by this budget, including those at hospitals throughout the state, this budget once again gives all K-12 education construction dollars to privately run charter schools. In Orange County, we have spent $34 millionin the last few years on charter schools that don’t even exist anymore. Yet, in the last two years, the Republican legislature will have given more than $110 million public tax dollars to build charter schools that are operated by, and for the profit of, private entities. This is not an appropriate use of our tax dollars.”

You know what else has been an inappropriate use of tax dollars (and the other half of our halvsies legislative yarn)? Get your yawns ready: redistricting! Having spent untold millions on fighting the fair districts amendments that you voted for – then wasted everybody’s time with the most boring community political theater tour ever for “public input” last year – Republicans in Tallahassee played their expected part in moving forward with their own kinder, gentler flavor of congressional and legislative gerrymandering. They approved their own maps!

But, as nobody would have expected,Florida Democrats were ready with a lawsuit challenge before the maps even had time to be properly mounted in their requisite oak frames.

“Republicans have undertaken the sort of incumbent protection and partisan gerrymandering that 63 percent of Florida voters overwhelmingly demanded must stop,” Florida Democratic Party Chairman Rod Smith said in a statement. “Now the courts have to step in to implement the will of the people – a job the GOP in Tallahassee failed to accomplish.”

Quick, grab a Republican to spin this!

“The sad part is now the taxpayers of Florida have to be dragged into courtby special interest groups who always intended to be dissatisfied,” Senate Redistricting Chairman Don Gaetz, R-Niceville, told the Miami Herald.

It’s enough to make you want to drink or smoke something funny, right? Well, be careful. Let us introduce you to SB 1810, which will change the state’s DUI law to a state “driving while impaired” law. Deep in the fine print is the revelation that soon you’ll be liable to take a piss test that tests for drug metabolites (or last week’s weed) if you’re pulled over. This state is covered in regulatory piss. This is the worst halftime ever.

One more bit of sad news,then we’re driving into a wall. Remember how awesome it was when that homeless guy Bruce Shawen filed papers to run against Orlando District 4 Commissioner Patty “Marie Antoinette” Sheehan last year? Well, on Friday, he officially bowed out of the race with a farewell email that included an Orwell reference: “I was unable to qualify as a candidate for the Orlando City Commissioner ballot due to the fact that I do not rent, lease or own property in the city of Orlando, and am not therefore considered to be a resident or citizen thereof. (I believe Orwell called it being an un-person).”

Usually incumbent candidates launch shadow campaigns to undermine the residency of their challengers via old OUC bills and shit stirring, but in this case, even though he’s a registered voter, Shawen is not a person enough to even be considered. Just one more example of how Orlando feels about its homeless population, then, and another reason to just sleep through the April 3 municipal elections. Your vote has already been purchased. You look like you could use a nap, anyway.