Gov. Rick Scott will declare a state of emergency over algae bloom on Florida's west coast 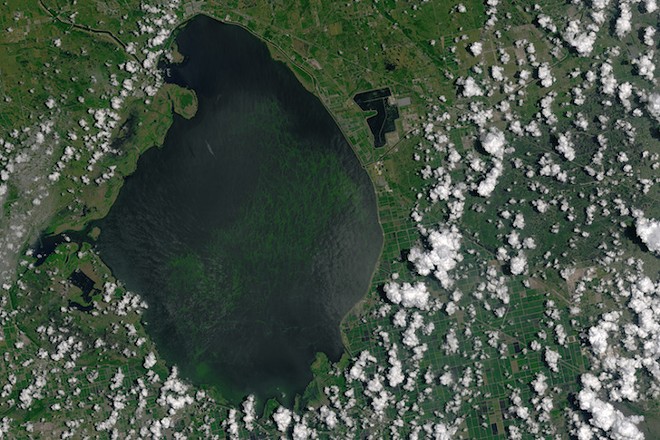 Photo courtesy of NASA
Gov. Rick Scott will declare a state of emergency after touring the Caloosahatchee River algae blooms early this morning.

The state of emergency is expected to include Martin and Lee counties.

The move comes after the Army Corps of Engineers temporarily suspended scheduled flows from Lake Okeechobee down the St. Lucie and Caloosahatchee rivers on Sunday. Now, the state plans to set up new water monitoring stations in the Caloosahatchee, secretary of the Florida Department of Environment Protection Noah Valenstein told reporters yesterday.

On June 21, the Army Corps, which keeps tabs on the lake's water level to keep pressure off the aging dike, announced that it would reduce water flows through the two rivers, both of which had been blamed for the green slime that mucked up beaches a couple years ago.

Prior to that, the South Florida Water Management District, which manages major drainage canals across the region, reportedly announced a series of measures, including the installation of temporary pumps, to help usher water through the Everglades regions of Palm Beach, Broward and Miami-Dade counties in order for the lake's excess water to be moved south.

Scott's previous emergency order asked that the water be moved south rather than further harm the coastal areas.

Prior to Scott's announcement, the Florida Democratic Party was quick to single out the governor's lack of action in the past.

"Now that it's an election year, Scott is saying and doing anything to get elected, but his record speaks for itself. He slashed the Department of Environmental Protection's budget, eliminated the DEP's ability to enforce their protection mandates, drastically reduced key local planning requirements and spent years vehemently fighting water quality standards," state Democrats said in a news release.

"No matter what he says today, the facts remain – as governor, Rick Scott has done nothing to actually help the algae bloom problem."

This is a developing news story. We'll update it as more information becomes available.