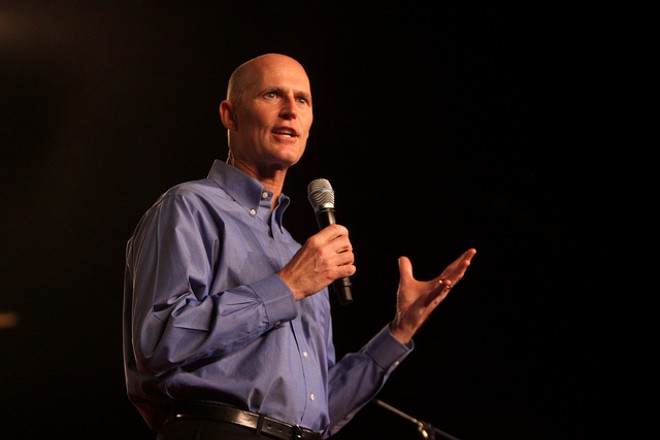 Photo by Gage Skidmore via Flickr
Pointing to thousands of overdose deaths, Gov. Rick Scott issued an executive order Wednesday that said an opioid epidemic has created a “state of emergency” in Florida.

Scott's order, and a related “public health emergency” declaration by Surgeon General Celeste Philip, came as lawmakers look to increase criminal penalties related to the potent synthetic opioid fentanyl. It also came after calls across the state for the governor to declare an emergency because of deaths linked to drugs such as fentanyl and heroin.

“I know firsthand how heartbreaking substance abuse can be to a family because it impacted my own family growing up,” Scott said in a prepared statement. “The individuals struggling with drug use are sons, daughters, mothers, fathers, sisters, brothers and friends and each tragic case leaves loved ones searching for answers and praying for help. Families across our nation are fighting the opioid epidemic and Florida is going to do everything possible to help our communities.”

Scott's office said the order will allow Florida to immediately draw down $27 million in federal money that can be used for prevention, treatment and recovery services. Philip's order authorizes pharmacists to dispense the drug naloxone to emergency responders. Naloxone can be used to block the effects of opioids and prevent overdoses.

A key lawmaker Wednesday praised Scott for taking action on the issue.

“He wanted to identify that the crisis was real, and get some evidence and gather some opinions from people and not go out half-cocked on it,” said Senate Appropriations Chairman Jack Latvala, a Clearwater Republican who said he had met with Scott's staff about the opioid issue. “So, that's what he did. I think the important thing is that he has done it.”

The Senate on Wednesday passed a bill (HB 477) that would impose tough criminal penalties on people who traffic in fentanyl, which is often mixed with drugs such as heroin and is one of the causes of increased overdose deaths.

The bill, in part, would create a first-degree felony offense for trafficking in fentanyl and similar drugs, with trafficking defined as involving four grams or more. The bill still needs House approval because senators made a change that would give judges some discretion in sentencing people convicted of fentanyl trafficking.

During a debate Tuesday, senators described the effects of fentanyl on their communities.

“This is a fire out of control that is deadly,” said Sen. Dennis Baxley, an Ocala Republican who son is a sheriff's deputy.