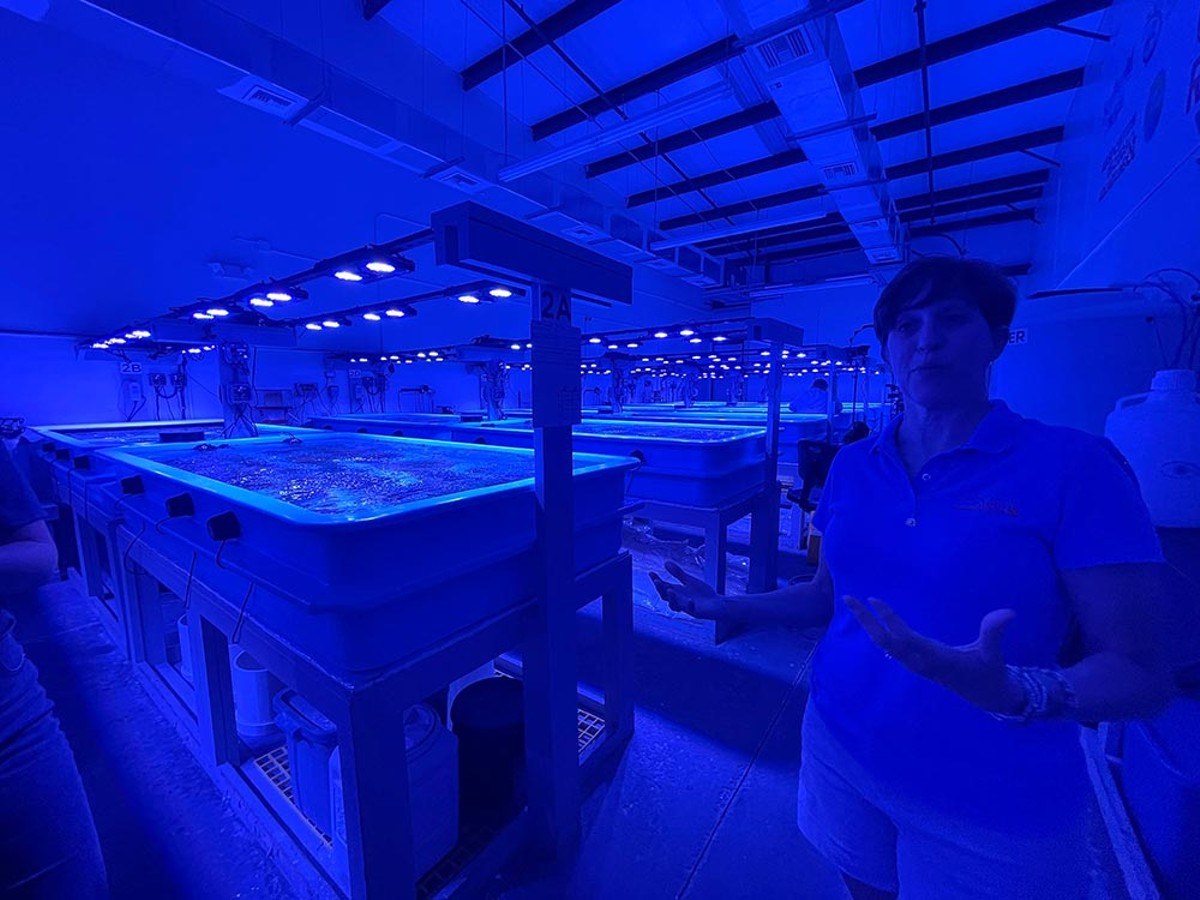 When I mention coral reefs and the challenges they face due to climate change, you probably think first of Australia or the Caribbean before Central Florida, and you certainly don't envision the industrial wasteland that is Orlando's South Orange Blossom Trail. But unbeknownst to many, inside a nondescript warehouse on the sketchy side of town exists a unique facility fighting to turn the tide in the coral's favor.

Next week this remarkable under-the-radar effort will get nationwide exposure thanks to a recently rebooted television classic, when the new Mutual of Omaha's Wild Kingdom (wildkingdom.com) highlights Orlando's Florida Coral Rescue Center. Although it's ordinarily off-limits to the public, I was allowed inside the FCRC last summer during filming of the episode airing on Friday, Feb. 3, and I got to see first-hand how scientists are hoping to restore this crucial ecosystem before it becomes extinct.

If you're a child of the 1960s or '70s with fond memories of enjoying the original Wild Kingdom on TV, you're not alone; Peter Gros also remembers "sitting on the couch with my family, watching Marlin Perkins and Jim Fowler telling stories about wildlife." The difference is that Gros grew up to join the show as a co-host in 1986, a couple of years before the original series ended its original 25-year run. Gros returns to headline this new series, subtitled Protecting the Wild, and he tells me that Wild Kingdom's sometimes-controversial filming methods have evolved with the times; instead of using nets and ropes, "we have drones, we have motion sensitive cameras, we have noninvasive ways to film wildlife [so] in some cases, they don't even know they're being filmed."

Gros says the focus of this new series (which is broadcast on RFD-TV and available free online) is on sharing successful conservation projects, "not telling stories about gloom and doom. We're pointing out the problems we have, and people who have come up with solutions for them." That brought them to Orlando's FCRC, which was established almost two years ago in response to the stony coral tissue loss disease that's been decimating Florida's reefs and spreading into the Caribbean since 2014.

Florida's 360-mile-long reef track is a "biological powerhouse" on par with Australia's famous Great Barrier Reef, according to Beth Firchau, project coordinator for the Association of Zoos & Aquariums. But it's also an economic powerhouse that "generates $8.5 billion in revenue for the state of Florida every year, and 70,000 jobs are benefited by the 'blue economy.'" Because of that, the "localized extinction event" affecting 22 of the 45 corals that form Florida's reef structures poses serious ecological and economic dangers for the region.

As a result of that threat, researchers began collecting thousands of coral samples in the wild, staying ahead of the disease progression to preserve healthy specimens for safekeeping in facilities like the FCRC. The coral are currently distributed in 22 locations across the country, but Orlando's 2058-square-foot facility is the project's epicenter, caring for over 700 of the program's 2,000 rescuees. Bathed in cool blue light, row after row of the bumpy brain-like polyps — which range from fist-sized to bigger than a bread loaf — soak in shallow trays of seawater, forming a living "bio-bank" that will hopefully safeguard the coral's gene pool for future transplantation back into their native habitat.

Creating the FCRC required an unprecedented collaboration coordinated by the AZA between Florida Fish and Wildlife Conservation Commission and NOAA Fisheries, along with corporate competitors SeaWorld and Disney (via their Conservation Fund).

"Disney and SeaWorld have worked together on the animal front for many years," says Firchau, "[but] this is the first time that at a corporate level, Disney and SeaWorld said, 'This is something we need to work together on,'" which helped make the facility possible within a matter of months. In fact, FCRC facility manager Jim Kinsler does double duty as SeaWorld's aquarium curator, with SeaWorld currently paying for FCRC's labor and operational oversight with theme park revenue.

And although right now there's no way for the general public to see the FCRC firsthand, Kinsler hints that SeaWorld is "actively working on a guest-facing element where people will be able to see these corals and the work that the team is doing in the very near future."

The good news, according to Firchau, is that the FCRC's corals "have just taken off [and] many of them have grown a lot faster than they would have on the reef." The bad news: "The crisis out on the reef is not going to go away overnight. These guys aren't going to be ready to send their offspring off onto the reef overnight. But what we can do is we can learn from what's going on out there, [and] make sure we're making good management decisions so that their offspring goes out into a better world."

Dire predictions of climate catastrophe make it easy to despair, but Gros says, "I stay optimistic because I know that programs like this are creating hope." He cites the improbable comeback of the California condor as proof that things can improve with enough communal effort and says, "I think hope is going to be what keeps us all going."

I hope that hopefulness will help the new Wild Kingdom spread the word about FCRC's work, because, as Firchau says, "Good conservation stewardship never runs out of fashion."