In 2011, the great writer John Jeremiah Sullivan wrote an essay for the New York Times Magazine about, among other things, sneaking away with an old buddy to smoke a joint while shepherding their families through Disney World. His friend had found a forum, he wrote, with a "fiend's guide to Disney World. It pinpointed the safest places for burning the proverbial rope, telling what in particular to watch for at each spot. Isolated footpaths that didn't see much traffic, conventional smoking areas with good hedge cover, places where you could hide under a bridge by a little artificial river – those were its points of interest."

The main rule of this guide was, however, "Be ready to book it." As in GTFO. And that's not a bad rule of thumb for the smoker in Orlando in general. Everybody else comes on vacation here. But as we still face a year in prison and a misdemeanor charge even for a small amount of weed, it might not be a bad idea for partakers to book a flight to a clime more friendly for their own head space.

With Trump in the White House and Jeff Sessions, a hard-line prohibitionist, as the nation's top cop, D.C. is not the most obvious place to go for your weed needs, though it's probably the closest American destination to Orlando where you can legally get your smoke on. But, like everything in that strange city, it is not easy to navigate.

The laws governing cannabis in the District are bizarre – and almost strangely utopian. A resident can grow six plants – 12 per household – and give away up to an ounce. But you can't buy or sell it or smoke it in public or in coffee shops or bars. The law cuts out all of the money. Or it tries to; as with everything in Washington, money will creep in.

But the skinny is, it's a terrible weed town for tourists and a great one for people who live there. Occasionally there will be a mass giveaway. As an act of civil disobedience, MJDC (the group that's primarily responsible for making it legal in the District) gave away thousands of jointson Inauguration Day, which people openly burnt around Dupont Circle. The lines, it seemed, were as long as, or longer than, those to get into the the inauguration.

If you really want to book it right now, jump in the car: The DC Edibles Fest is happening on Sunday, April 23. Dozens of vendors are signed up and, presumably (details are a little vague, surprise surprise) your $25 ticket gets you access to those edibles, since you can't legally purchase them from the vendors.

Incidentally, this is the way capitalism seems intent on entering the marijuana market. There are a number of services that allow you to make a donation for a delivery or buy something else – a popsicle or whatever – and the service or item comes with "free" weed.

But be careful. Weed is kosher in the District, but not on federal property. And especially when you're hanging around the tourist areas, it's really hard to know whether you are on federal land or not, so it's best to assume you are. You probably won't get searched, but you still don't want to fire up with Lincoln at his memorial.

People are calling Barcelona the "new Amsterdam," which is in some ways true, but in many others misleading. It has become the capital of European cannabis cultivation and it's where all of the bomb seeds and interesting genetic breeding work is going on. So from the cultivator's perspective, it is the new Amsterdam. From the consumer's perspective, considerably less so.

That's because all of the great cannabis clubs are private and work like collectives. Members started pooling their money together to get someone to grow for them so that they could escape the black market. They argued that they were free to do what they wanted with their own bodies and, since Franco died and the country emerged from fascism, they were free to associate however they wished. "They also say it is a sickness," says Anna Obredors, a cannabis consultant, "and they can't outlaw sickness."

Obredors took me to one of these truly private clubs that I would not have been able to go to by myself. It was beautiful and you wouldn't have noticed it from the street at all. You put money on an account and then when you order something, no money changes hands. It was like the nicest coffeeshop you could think of, a great place to sit and read and do some work – but it had dozens of varieties of hash and beautiful, often organically grown, buds of every sort.

But even if you don't know anyone to take you to a private club, you'll be fine. The first time we walked through the Gothic Quarter, someone approached us and asked us if we smoked weed. We followed him around the corner to a small little place behind a big cathedral. We had to pay a 20-euro membership fee and show our passports. Then a second door opened and we entered a small dark bar with some stools, couches and a pool table.

The weed wasn't nearly as good as at the private place and the selection wasn't stunning, but there were three or four sativas and a few indicas. They provide papers and bongs and whatever you need, and you can just order a beer or a soda and sit and chill.

Evidently, these places get shut down pretty regularly for catering to tourists. The address on our membership card was actually for the former incarnation of our club and so when we looked for it again, we couldn't find it ­– so we had to go to the church again to find our spot.

Even after getting much better weed, we still frequented this club, because you didn't have to buy something new every time. And it was in the Gothic Quarter, so if we were on our way to the Picasso Museum or Gaudi's Casa Batlló we could stop in, have a toke, and then go enjoy ourselves.

Barcelona is a spectacular city even without weed, but if you're a head, the beautiful architecture and ancient streets, the sea and sky, the voluble and outgoing people, and the exceptional tapas and drinks are all enhanced by the weed – it's a stoner's dream.

We ate the giant, green-chile-soaked burritos at Sam's No. 3 Diner in downtown Denver right after we got to town. It was near all the fancy convention hotels and stuff, but it was not a fancy place. Cheap burritos. Cheap beer. Open early, closing late, Sam's stretches nearly an entire block. We loved it from the moment we walked in.

But not nearly as much as we did the next day, after we'd found Native Roots around the corner. Then it was out-of-this-world good – from the sizzle of the chile to the fizz of the beer, it felt ecstatic.

That's because I'd eaten a couple of edibles and had a couple hits from a vape pen first.

In Denver, the weed stores are really beautiful. At Native Roots, you go in and they check your ID before letting you into the shopping area, where you wait in line and then point out what you want from behind the counter. Bring cash – because of the federal law against marijuana sales, they won't take credit or debit cards. You also aren't allowed to consume on premises, so if you're staying at a regular hotel, get something discreet like a vape pen – or look for a hostel, hotel or Airbnb that is 420-friendly (they're out there).

Another place – I can't remember the name because I was so high – was set up more like an Apple store, with wooden floors and tables with big buds in jars with nets over the mouths, so you couldn't touch the buds but could still smell them; iPads beside the jars scrolled all the relevant information.

But people aren't just visiting Colorado for cannabis – they're moving there. After recreational pot was legalized in 2012, the population grew by over 100,000. Even if you don't smoke, the call of the weed is strong. The legal weed industry provided 18,000 jobs and generated nearly $2.5 billion dollars in 2015. Last year, in Denver, sales reached $1 billion.

But don't pack up your house yet. According to some sources, this influx of people and money has also led to gentrification and a housing crisis. And there are so many people coming for the business, some growers say it's like farming anywhere else in America now – nearly impossible to make a fair living.

Still, it is a beautiful city up in the mountains – mile-high in every sense – and they won't throw you in jail for something you decide to do with your own body. A nearly perfect vacation spot. 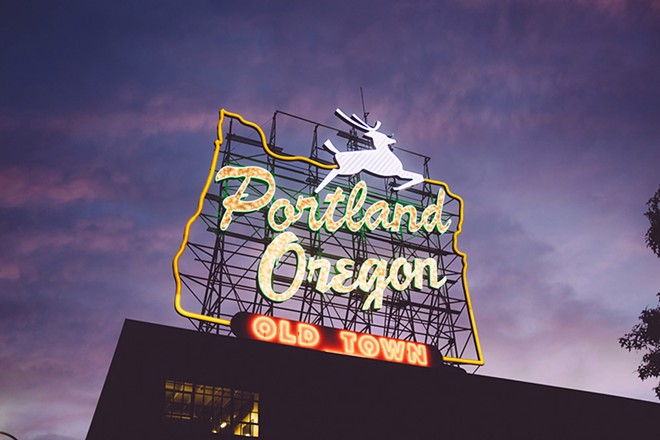 The dream of the '90s may still be alive in Portland – a city home to so many Orlando ex-pats that its' sometimes called Portlando, Floregon – but the dream of the 21st century is also shaping up there: a dream of being able to do what you like to your own body. Although the state as a whole is fairly conservative, Portland is extremely progressive (Portland : Oregon :: Austin : Texas), and even statewide, there's a general ethos of keep-your-government-off-my-body. For instance, for many years Oregon was the only American state to have a "death with dignity" law.

Alongside this progressive bent, add a city full of reponsible hedonists. Everyone is so goddamn healthy, from all the biking and hiking and so on, but they do like to celebrate anything that makes you feel good, with a strong emphasis on food, wine, coffee ... and weed.

"Portland is a great place to experience the emerging cannabis scene," says Chad Dean, a writer who co-founded Splimm, a pot and parenting website, with his wife. "Anyone 21 or older with a valid government ID can purchase up to 1 ounce of flower, five grams of concentrate [hash oil], 16 ounces in solid form [like a candy bar], and 72 ounces in liquid form."

Dean says it's best to start by heading down Sandy Boulevard on the east side of the Willamette River, which takes you through the "green mile," which he describes as "a stretch of road adorned with a variety of recreational cannabis shops." Dean also recommends the dispensary Farma to his friends because of the how knowledgeable the budtenders are.

Another popular spot – perfect for tourists, as it's located downtown, where there's a concentration of hotels – is Serra Modern Druggist, which carries flowers, concentrates, edibles, body products and accessories, in a space so tasteful it's often mistaken for a high-end design store. There's also a preponderance of food cart lots downtown, including the Alder Street pod, home of the legendary Nong's Khao Man Gai. We can think of few things nicer on a high than a plate of that amazing Thai chicken and rice followed by a wander through Powell's City of Books, which covers an entire city block downtown.

Keep in mind, though: It's not legal to consume in public at all, so Dean says the best bet is to find an Airbnb, since hotels also will not allow you to smoke on-site.

"Tourists can try the Northwest Cannabis Club, which has an entry fee of $20 for the first visit and $5 for every additional trip. Smoking is permitted outside on the patio and they have some equipment for vaporizing inside. It's BYOEverything Else, though."