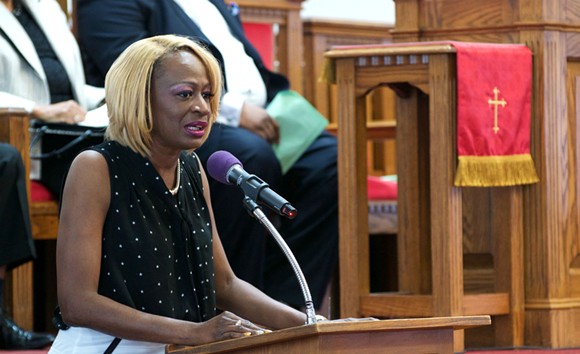 Photo by Monivette Cordeiro
A former Orlando firefighter and Pulse first responder was jailed Wednesday on charges he allegedly recorded audio of City Commissioner Regina Hill while responding to a medical emergency call in August 2017.

"My privacy has been destroyed," Hill told reporters last December. "But I have decided to talk about this and respond, because we must ensure that the community feels comfortable and safe when calling 9-1-1 for medical emergencies. No one should fear that they might be recorded without their knowledge. ... The public trust is paramount to what we provide here in the city of Orlando, but especially our public safety personnel like firefighters."

On Aug. 27 2017, Granada was one of several firefighters who responded to the DoubleTree by Hilton hotel where Hill was staying. Granada claimed he felt threatened after Hill was "belligerent" during the medical call, so he recorded a 30-second audio clip of Hill for the safety of both him and his fellow firefighters.

Granada is also accused of playing the audio clip of Hill for other firefighters at the station. The first responder was fired Nov. 21, 2017 from the department for violating its policies, but Granada has argued he was terminated for breaking protocol to save lives during the 2016 mass shooting at the gay nightclub Pulse.

Granada, who was was awarded Florida's "Firefighter of the Year" award in 2017 for his heroism at Pulse, has also said his firing was in retaliation for reaching out for help to cope with post-traumatic stress disorder (PTSD).

City officials have said no firefighter was denied mental health services nor was any firefighter harassed for seeking treatment.

"Unfortunately, Granada's actions the night of the Pulse shooting, however heroic, do not justify the illegal recording of a patient receiving medical care – violating the patient’s right to privacy," the city said.