For Valentine's Day, nothing says "I love you" better than rotting table scraps 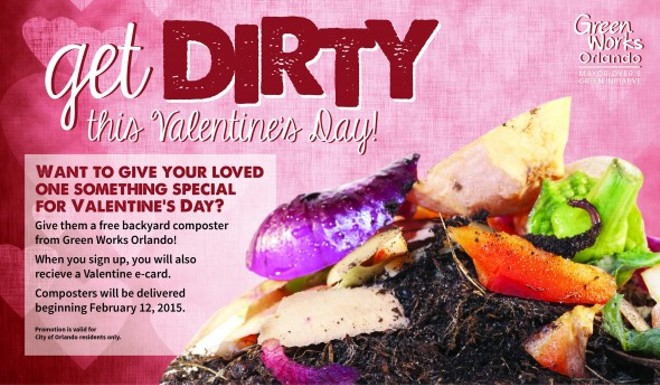 In honor of Valentine's Day, the city of Orlando is holding a very special promotion. Visit the city's website, fill out a short form and you'll be put on a list to receive a free composting bin, as well as a Valentine's Day e-card. The "Get dirty this Valentine's Day" promotion is part of Mayor Buddy Dyer's Green Works Orlando program, and there's even a terribly risqué video on YouTube to help promote the effort.

A video that makes us wonder … where are these people hanging out? Because it looks like the most desolate cafe ever.


We totally signed up for our free composter, though. The city didn't even have to lure us in with this vaguely suggestive promotion – if they were giving away composting bins for National Pharmacist Day, we probably would have signed up. Because free. And they're delivering them. And doesn't everybody want a composting bin but not the hassle of having to buy one and drag it home from Home Depot? No? Just us?