Flowers for the Dead: Democracy's demise at this morning's Orange County board meeting, WITH FLOWERS!

So, if you don't have whiplash yet from the legal back-and-forth going on between your Orange County Government and the 53,000 people who signed a petition to get earned sick time on the November ballot, then you clearly have much more interesting things to be concerned about than we do. Following last night's court ruling that the board must – by virtue of its own charter – acquiesce and put the initiative on the ballot felt like a geyser of justice pressed through the firmament of ridiculous moneyed interests that start with 'D' (Hello, DISNEY AND DARDEN!). Of course, there in the fine print was the fact that the county had 20 days to respond to the order, meaning that – again, POOF! – the county would once again ride out the clock and pretend to be confused about what it clearly already knew. In fact, we've obtained letters from several of the commissioners dated back to the middle of August in which they pressure Orange County Mayor Teresa Jacobs to cynically ride out the clock on the measure, meaning that if the commissioners are going to play all "caught off guard" by the "LANGUAGE" of the ballot initiative, they should probably have taken some better acting/lying classes. We'll leave most of the dense details to David Damron over at the Sentinel, who has been doing a remarkable job updating (and updating ... and updating) this mess as it trundles along into a cave of mutilation, but suffice to say, the county is not going to do its duty to its citizens because a.) it feels like there hasn't been enough time to vet the issue and b.) according to Mayor Jacobs, "Our economy is too fragile to experimenting here in Orange County." rant/ LOUD COUGH! IS ALL OF ORANGE COUNTY'S HORRIBLE BUSINESS PORTFOLIO NOT THE WORST EXPERIMENT EVER KNOWN TO MAN? IS THAT NOT WHY WE NEED SUCH REGULATIONS AS SICK TIME? /rant.  Certainly, there will be more to this story, as currently there's a fight going down over whether the fix was in at the Sept. 11 meeting .... (here I am at said meeting, sitting next to a bandana)
click to enlarge 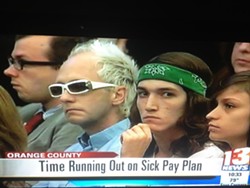 ... via a series of texts a'flying between the commissioners, county attorneys and probably the Chambercrats. The awesomely sick folks representing the sick time initiative have petitioned the county for the very public records of text messages on county-issued phones, though the county, erroneously even, claims that they don't have to hand them over. Whatever, State Rep. (and attorney for Citizens for a Greater Orange County) Scott Randolph, D-Orlando, rushed out a temporary injunction following this morning's circus in a last ditch attempt to force the measure onto the ballot:

CITIZENS FOR A GREATER ORANGE COUNTY’S

Citizens for a Greater Orange County (“Citizens”), a political action committee registered in Orange County, Florida, pursuant to Rule 1.610, Florida Rules of Civil Procedure, moves for a temporary injunction with or without notice to Orange County (the “BOCC”) and states: On September 17, 2012, Citizens filed an Amended Complaint for Emergency Writ of Mandamus and Declaratory Judgment. The pleading was served on the County Attorney’s office, counsel for the Orange County Supervisor of Elections (the “SOE”), and counsel for prospective intervenors. In compliance with the Court’s prior order, the BOCC and SOE submitted an answer and brief, respectively, prior to 1 p.m. Late in the afternoon the Court executed the requested emergency writ of mandamus and ordered Citizens to serve the BOCC. Early in the morning, on September 18, 2012, the BOCC was served with the writ and the Amended Complaint.  An affidavit of service was filed, and is attached hereto and incorporated by reference.  (Exhibit 1). Citizens contacted the Court for a hearing time. Citizens seeks a temporary injunction that includes each of the findings of fact in Rule 1.610, with or without notice to the BOCC, and represents that the BOCC’s counsel of record Jeffrey Newton and/or William Turner were telephoned at _____________a.m. and informed of the hearing.  Email notice was also provided. This Motion is supported by the Affidavit of Service, the writ, and the Affidavit of Marlon Washington, which is attached hereto and incorporated by reference. (Exhibit 2). Citizens seeks an injunction to preserve the status quo, that Citizens initiative ordinance petition and the SOE’s Report and Certification, triggered the 30 day deadline in Charter Section 602(2).  Since the BOCC voted not to adopt the ordinance, the BOCC had an obligation to adopt a resolution to place the question of the ordinance on the ballot for the November 6, 2012, general election. The SOE’s deadline for processing of the November 6, 2012, ballot is September 18, 2012. The BOCC is conducting a meeting on September 18, 2012. Unless the BOCC adopts a resolution to place the question of the ordinance on the ballot, as soon as possible on September 18, 2012  the measure will not appear on the ballot for November 6, 2012. Citizens will suffer irreparable harm if the requested temporary injunction is not granted, since the measure is required by the Charter to be considered at a public hearing within 30 days of the SOE’s Report and either an ordinance or resolution adopted. Citizens has no adequate remedy at law because of the SOE’s deadline. Since Citizens is acting to vindicate the fundamental rights under Article I, section 1 of the Florida Constitution to petition the government, and fundamental rights of self-governance provided in Sections 601 and 602 of the Charter, and the BOCC is already scheduled to meet, either the bond requirement should be waived, or a nominal bond set. The Court has the power to expedite consideration of declaratory and injunctive relief, and to grant supplemental relief, on an expedited basis under Chapter 86, Florida Statutes.  That exercise of discretion is appropriate in an election case, such as the case at bar. WHEREFORE, Citizens respectfully requests that the Court issue an emergency, expedited temporary injunction to compel the BOCC to adopt a resolution to place the question of Citzens’ ordinance, on November 18, 2012 and to immediately provide same to the SOE for preparation of the ballot.  Citizens further requests that the Court’s injunction order contain the findings of fact under Rule 1.610, Florida Rules of Civil Procedure; and that such order contain findings and conclusions that bond should be waived, or required in a nominal amount. Respectfully submitted, /s/Scott A. Randolph SCOTT A. RANDOLPH, ESQUIRE Florida Bar No.: 0566411 P.O. Box 533905 Orlando, FL 32853-3905 (407) 575-8276   Ross Stafford Burnaman Attorney at Law Fla. Bar No. 397784 1018 Holland Drive Tallahassee, FL 32301 850-942-1474 [email protected] Attorneys for Respondent, Citizens for a Greater Orange County

So, maybe it will happen then? WE DIDN'T MAKE ENOUGH POPCORN. Anyway, any mention of this morning's commission meeting would be incomplete without pointing and laughing at Chamberpot Jacob Stuart's ruminations on "Sunday School" and the knees of teachers as well as some funereal references to the "death of democracy" that several speakers alluded to. And what's a funeral without flowers!? If you look closely at the picture up top, you can see that the commissioners were effectively flowerbombed early in the proceedings, causing nary a blink from the dais. Activist Timothy Murray tells us, perhaps jokingly, that this was in deference to Morrissey and The Smiths, which makes this whole thing that much more awesome. This charming man, indeed. [youtube 8slRasAHTA0] We'll try to keep you posted on any updates, as this only promises to get uglier. You know that part in an argument where you give up and admit that you're wrong, then run out and reset yourself? This is that part, Teresa. Everybody is on to this crap now, and we're all getting sick of it. [youtube ch7sQHcsr2Y]