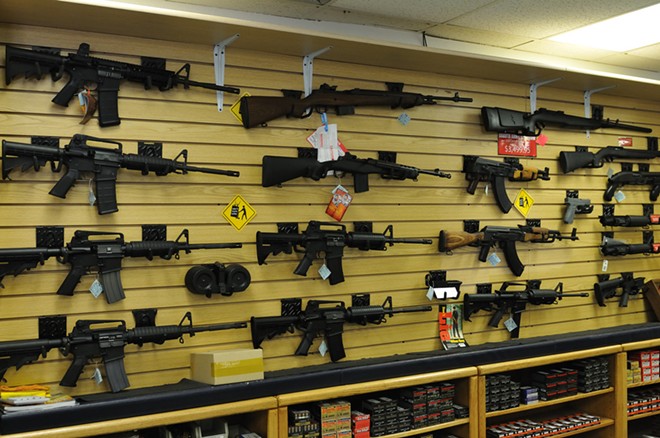 Photo via Michael Saechang/Flickr
Saying she fears for her safety, a young woman who wants to join the National Rifle Association’s challenge to a new Florida law that made it illegal to sell guns to anyone under age 21 is asking a federal court to keep her identity secret.

In court filings seeking a federal judge’s permission to proceed with the pseudonym “Jane Doe” for the woman, the NRA relied heavily on a sworn statement by the group's Florida lobbyist, Marion Hammer, who said she has received “scores” of threatening phone calls and emails following a February mass shooting at Parkland's Marjory Stoneman Douglas High School that left 14 students and three faculty members dead.

“After news of the Parkland shooting broke, I received numerous harassing emails and phone calls threatening my life and physical well-being. Those threats continue to this day,” Hammer wrote in a statement filed Thursday.

According to Hammer’s declaration, the 79-year-old great-grandmother has received “scores of threatening and harassing phone calls from individuals who have used offensive and derogatory language” and made threats on her life.

Several of the dozen messages, from senders whose identification was blacked out in the court documents, featured derogatory words for parts of the female anatomy.

Another warned Hammer, “there is a special place in hell for nasty old rednecks like yourself.”

The unidentified sender concluded: “Blood on your hands. You’re going down.”

On March 10, another critic called Hammer “a dyspeptic nasty old bag” whose “extremist ideology is getting a lot of people killed.”

“May you rot in a prison cell before you rot in hell,” the writer wound up.

Another email accused Hammer of supporting “hatred and murderous intent.”

“Many are holding you accountable. Yes you need your guns because you have no strength of character and are ugly vile Stupid ignorant and murderous. There is no defense for you. Should have been you as one of the victims,” the March 12 message said.

Hammer, who has advocated on behalf of the gun-rights lobby for more than five decades and for years has used Florida as an incubator for model NRA legislation, has repeatedly been the target of vitriol from proponents of stricter gun laws.

But the viciousness this time around has eclipsed even the ugliest messages from the past, Hammer told The News Service of Florida on Monday.

“This is different. This is totally different. The intensity, the filth, the vile nature. We’ve never had anything like this before,” she said.

The Broward County massacre, one of the worst school shootings in the nation’s history, prompted the Legislature to hurriedly pass a school-safety law, signed by Gov. Rick Scott on March 9. Among other things, the new law raised the minimum age from 18 to 21 and imposed a three-day waiting period to purchase long guns, such as the AR-15 semiautomatic rifle that 19-year-old alleged gunman Nikolas Cruz legally purchased a year ago without any waiting period and used to mow down students and teachers.

The NRA, which filed the lawsuit in federal court hours after Scott signed the bill, contends the age restriction in Florida’s “blanket ban violates the fundamental rights of thousands of responsible, law-abiding adult Florida citizens and is thus invalid under the Second and Fourteenth Amendments.”

Under federal law, gun dealers with a federal license in Florida already are banned from selling handguns to buyers under 21. The federal law also allows states to impose waiting periods on the purchase of handguns, something already required in Florida prior to the enactment of the new statute, which extends the three-day waiting period to long guns.

In a copy of the amended complaint posted in federal court Thursday, the NRA’s lawyers called Florida’s ban on sales of all guns to people under 21 “a significant, unequal, and impermissible burden on the right to keep and bear arms of a class of millions of law-abiding 18-to-21-year-old adult citizens.”

The NRA asked the court to allow potential plaintiff “Jane Doe,” who said she wants to purchase a firearm for self-defense, to join the suit and to keep details about the 19-year-old Alachua County resident private.

“Because of the highly controversial nature of this litigation, however, I am afraid that if my association with the lawsuit became public, I would be subjected to harassment, intimidation, threats, and potentially even physical violence,” the woman wrote in a sworn statement submitted to the court.

Leon County resident “John Doe,” a 19-year-old member of the NRA, also wants his identity to be kept off-limits to the public, the NRA’s lawyers wrote.

“Few issues of public policy are as controversial and politically polarizing as the possession and use of firearms,” lawyers for the NRA, who include Tallahassee attorney Kenneth Sukhia, wrote in Thursday’s request. “Ms. Doe seeks only to purchase firearms for lawful use in the privacy of her own home as the Second Amendment guarantees; but publication of her identity would expose her to unwanted public attention and censure for exercising her right to challenge a statute denying her a fundamental constitutional right.”

U.S. District Judge Mark Walker gave the state until the end of this week to respond to the NRA’s request to use pseudonyms for “Jane Doe” and “John Doe.”

In Friday’s two-page order, Walker indicated that the state’s lawyers did not oppose the amended complaint but objected to the addition of “Jane Doe” as a plaintiff and “John Doe” as an “associational member” of the lawsuit.

The state has until May 21 to respond to the NRA’s challenge to the new age-related law.