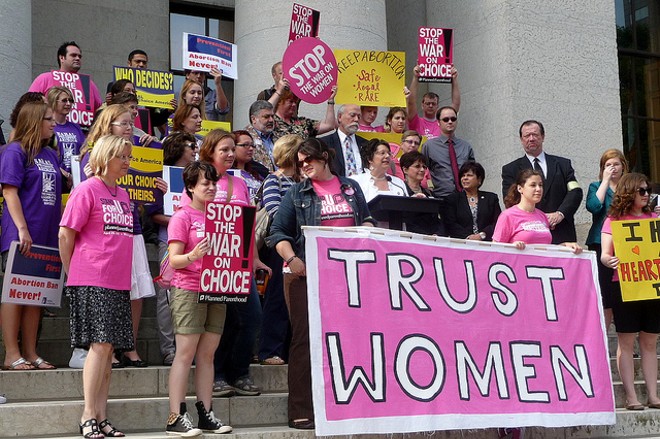 Photo by Progress Ohio via Flickr
In a legal debate that focuses heavily on privacy rights, the Florida Supreme Court heard arguments Tuesday about whether it should block a 2015 law that calls for women to wait 24 hours before having abortions.

The American Civil Liberties Union, representing a Gainesville abortion clinic, is asking justices to overturn an appeals-court ruling that would allow the law to move forward.

"The mandatory delay law violates the right to privacy in a very literal way: It plants the government squarely between a woman who has decided to have an abortion and the health care she seeks," Julia Kaye, an ACLU attorney, told the Supreme Court. "This interference isn't incidental to the law. It is the point of the law."

"The waiting period is not because it's a medical procedure," Harle said. "It's a waiting period because this is an irreversible, life-altering decision on the order of things like marriage, divorce, giving up your child for adoption and other contacts where the state imposes a very brief waiting period for major life decisions."

The Republican-controlled Legislature and Gov. Rick Scott approved the waiting period last year after heavy debate and quickly faced a legal challenge filed by the ACLU on behalf of Bread and Roses Women's Health Center in Gainesville and Medical Students for Choice.

A Leon County circuit judge issued a temporary injunction blocking the law from taking effect, but the 1st District Court of Appeal overturned that decision in February. The appeals court pointed to a lack of evidence to support the temporary injunction, saying in part that the circuit judge "failed to make sufficient factually-supported findings about the existence of a significant restriction on a woman's right to seek an abortion."

The plaintiffs took the case to the Supreme Court, which in April issued a stay that has effectively prevented the law from being carried out while justices consider whether to approve the temporary injunction. While it heard arguments Tuesday, the Supreme Court typically takes months to issue opinions.

"That's why it's not neutral is because it's singling out this decision to say the state has this compelling interest in mandating that women wait 24 hours," Pariente said.

The hearing included repeated references to part of the Florida Constitution that includes broader privacy rights than provided under the U.S. Constitution. That part of the state Constitution has been a key part of legal battles about abortion issues in Florida.

Abortion bills regularly spur fierce debate in the Legislature, including this year when lawmakers and Scott approved a bill that would have led to increased inspections of clinic records and prevented abortion providers from receiving public money for other health services. A federal judge in August issued a permanent injunction against that law.

After Tuesday's hearing on the waiting-period law, Howard Simon, executive director of the ACLU of Florida, said the 24-hour requirement stemmed from political opposition to abortion.

"When you have a law that requires women to take more time off from their job, that requires them to get more child care, that may require them to endanger their health by delaying something that they have already decided to do … you can dress that up as much as you want, but that's political interference not medical interference," Simon said.

But Ingrid Delgado of the Florida Conference of Catholic Bishops said a waiting period is justified before women have abortions.